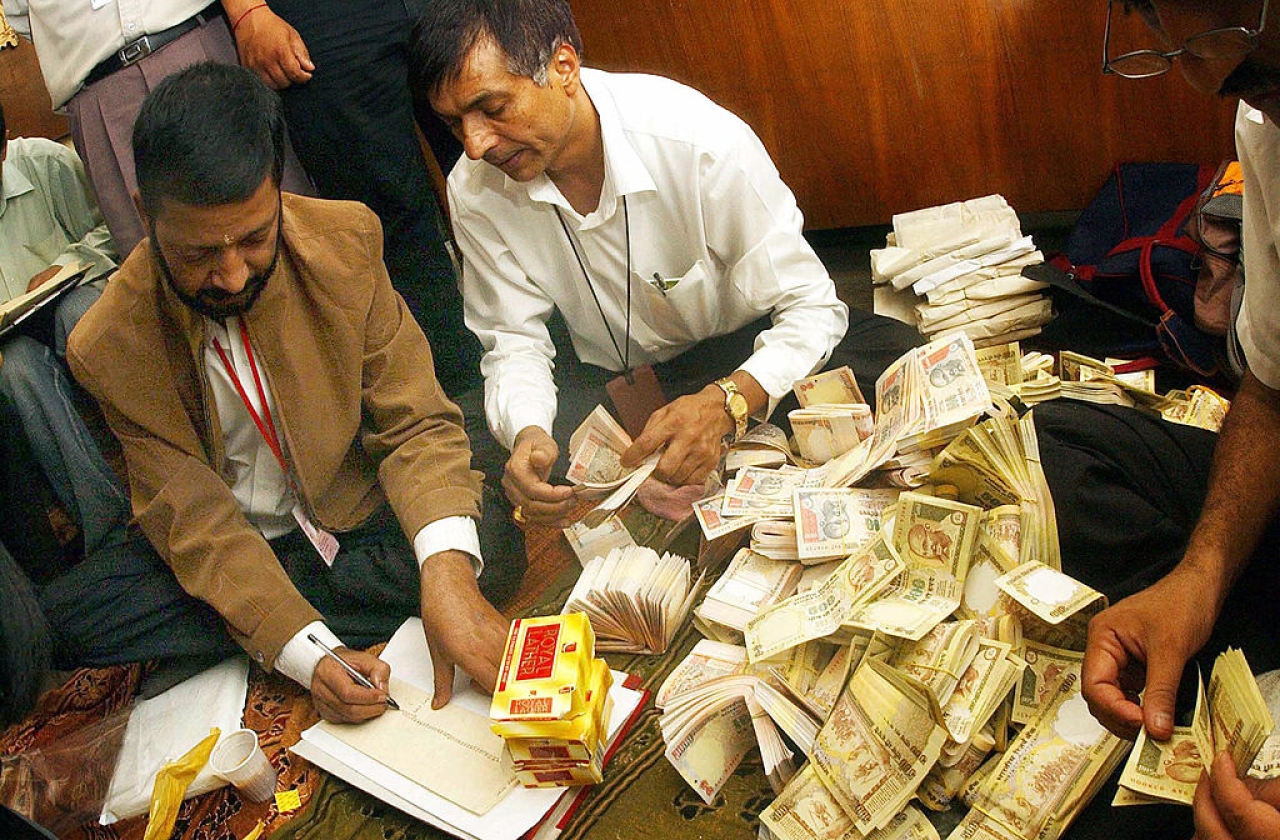 On 16 August 2013, a Lashkar-e-Taiba terrorist Abdul Karim Tunda was arrested by the special cell of Delhi police. Tunda was arrested in Uttarakhand’s Banbasa area, close to the Indo-Nepal border. This happened when he was trying to enter into India with consignments of Fake Indian Currency Notes (FICN) provided to him. During the interrogation, it came to light that FICN were provided to Tunda by Pakistan’s ISI.

Faking or counterfeiting the currency notes of a country is considered as one of the world’s oldest professions. Historically, in most cases, counterfeiters were individuals or groups. They counterfeited money for their own profit or expenditures. However, in modern history, this tactic has been employed by several sovereign nations. In the 20th century, states started to counterfeit the currency notes of their enemy states to undermine their economy. History records that Adolf Hitler initiated ‘Operation Bernhard’ during Second World War, in which the British pounds were counterfeited. These notes were injected into the British economy, and as a result, Britain had to withdraw most of their currency notes in circulation.

The 8 November 2016, announcement of demonetisation by Prime Minister Narendra Modi resembles Britain’s decision. This significant decision has hit multiple targets. But certainly, one of the main targets happens to be the FICN in circulation. There are two reasons for this. The primary reason is that the FICN is the lifeblood for ‘weaponry terrorism’. Secondly, any surge in the circulation of FICN causes economic instability, which is sometimes termed as ‘economic terrorism’.

When we say economic terrorism, it refers to the threats posed by FICN. First is inflation: FICN pushes up the number of currency notes in circulation, which in turn would increase the demand for goods and commodities. The rise in demand creates a scarcity of goods, which results in higher prices of products. This leads to the second threat: currency devaluation. In addition to these, counterfeit notes cause a reduction in public confidence due to the aggravation of black marketing of goods, investment of participatory notes in the stock market and hoarding of precious commodities such as gold. This leads to asset inflation, which increases the cost of living, thereby directly affecting the welfare of common man. All of these harm the nation’s economy, which is also crucial for national security.

In 2013, the report of Financial Action Task Force(FATF) said that the Indian currency is the third most counterfeited currency in the world. According to National Crime Records Bureau (NCRB), the most counterfeited notes were the old Rs 500 notes, followed by Rs 1,000 and Rs 100. From 2011 to 2015, more than 26 lakh fake currency notes, with a face value of Rs 167 crore, have been either recovered or seized by the RBI and the law enforcement agencies.

In 2013, the FICN in circulation was 0.21 per cent of the total currency in circulation. Pointing out this data, former finance minister P Chidambaram censured the demonetisation move by the Prime minister. He termed this move as a total failure, hitting the FICN, which are in minuscule proportion to the total currency in circulation. This proportion might be subtle. But it is more than enough to finance many sabotage operations in India. For instance, when Chidambaram himself was the finance minister, only Rs 80 lakh worth FICN were used by the terrorists to conduct the horrendous 26/11 attack. The collateral damage caused by this was monumental.

Irrespective of its proportion to the total currency, FICN is certainly a threat to the national security of India. For its weaponry and economic terrorism against India, Pakistan has always been logistically supportive of pushing the FICN into India. There is concrete evidence for this.

Firstly, the FICN printed have imitated the security features of genuine Indian currency notes. This can only be done using sophisticated printing machines available with a sovereign state. In 2013, a forensic analysis by NIA unraveled that the paper used to print the FICN matched the paper used for the legal tender of Pakistan. Secondly, the parameters of Indian currency notes, such as paper density (GSM), wax pick quotient, polyvinyl alcohol and pH values matches the legal tender of Pakistan. Thirdly, the investigation of Karim Tunda, also disclosed that the FICN was printed in the printing presses in Islamabad and Peshawar.

The notes printed in Pakistan entered India through four traditional routes. The first two are directly from Pakistan through the border areas in Jammu and Punjab. Due to the surge in infiltration attempts, there is a sharp vigilance along these border areas. The other two routes are through Nepal and Bangladesh borders. Apart from these four prominent routes, FICN entered India through various transit zones. These include Dubai, Hong Kong, Bangkok, Singapore and many such trade free trade zones.

Amongst the traditional routes, India-Bangladesh border was the most preferred. The FICN printed in Pakistan, enters Bangladesh in different consignments, and is eventually smuggled into India. This is then taken to India’s counterfeit capital, Kaliachak, in Malda district of West Bengal. Here, in the last two years, the police have lodged 180 FICN cases, arrested 240 people and have seized FICN worth Rs 1.14 crore. A Border Security Force (BSF) official says, almost 80 per cent FICN that moves to different parts of the nation, originates from Malda district. The demonetisation announcement has jolted the FICN markets in these border areas. Interestingly, there is a reduction in FICN transfers through the India-Bangladesh border from Rs 2.87 crore in 2015 to Rs 1.53 crore in 2016. To prevent infiltrations and smuggling of FICN through porous riverine and unmanned terrain, BSF is installing laser walls and smart sensors, along the Bangladesh border in West Bengal. It is said to become operational by next year.

Another porous traditional route is the Indo-Nepal border. According to intelligence sources, FICN is received in Nepal from Xinjiang province of China, a province known for its drug cartel businesses. ISI has an extensive network in this region. Based on the inputs from Indian intelligence, the Nepal authorities arrested RanjitJha of Birganj. This happened when he was receiving a consignment of Rs 30 lakh in FICN, transited through China. China has emerged as a new transit route for Pakistan printed FICN, since the prevailing transit routes have been decoded by the Indian intelligence agencies.

One can therefore clearly comprehend that demonetisation has severely hit FICN pushed in by Pakistan. The outcome is explicitly visible after it choked the funding of the Hurriyat Conference, which has brought down the Kashmir violence by 60 per cent. Sources in the valley have reported a tremendous fall in stone-pelting. The cash held by the terrorists, have turned into pieces of paper of no value. Due to frustration, there have been reports of significant increase in bank robberies by the militants in the valley. Also, both the state actors and the non-state actors of Pakistan have shut their FICN shops, which have been supplying the FICN to the Kashmir valley.

The economic terrorism caused by pushing FICN into India, is one of the reliable sources of funds for the ISI. It is estimated that the ISI earned an annual profit of Rs5 billion by causing economic terrorism against India. The money earned is again supplied to terror outfits and separatist elements in India. This profit earned is transferred to these elements through the hawala system, which completes the vicious loop of the flow of funds.

Since the colossal funds required to fund the terrorist groups rely heavily on injection of FICN into India, Pakistan’s ISI smuggled FICN into India. So demonetisation has not only blocked the FICN supply, but has also affected the hawala fund flow from Pakistan. Furthermore, one of the key reasons for imposing demonetisation is to halt these counterfeiters and to shatter the economic threats posed by them. Senior government officials have said that counterfeiters will face difficulty in copying the intricacies of the new currency notes. A complete design overhaul and the addition of security features in the new notes will pose difficulties for counterfeiting in the future. Moreover, a special FICN coordination group has been formed to track FICN, supported by the Combating Financing of Terrorism Cell (CFT) under the Ministry of Home Affairs. This will lubricate the transition from an untraceable to a traceable system of functioning. There has always been a demand for such strong actions raised from all corners of the country.

Abiram Devnathan is a research intern at Vision India Foundation, New Delhi. He is a final year Mathematics undergraduate in Loyola College, Chennai.

Get Swarajya in your inbox everyday. Subscribe here.
Tags:
23 Shares