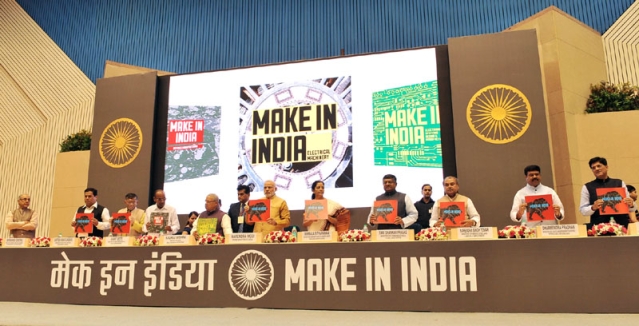 India must harness its strengths if ‘Make in India’ is to be a success.

As one of the biggest initiatives from Prime Minister Narendra Modi, “Make in India” has made  headlines in India; most recently the Indian presence at the Hannover Messe trade show was dominated by this idea and its ubiquitous lion branding. But there is some confusion about what it really means. Here I give you my interpretation of what it might entail. A disclaimer: I don’t pretend to have any inside insight; this is just a conjecture from someone who has worked with innovation for years.

What “Make in India” is not

Let me first start with what I think “Make in India” does not mean. It could not possibly mean the creation of a manufacturing empire similar to China’s. There are many reasons for this: on the one hand, there isn’t enough global demand for another large manufacturing powerhouse emulating China; on the other hand, India simply doesn’t have the infrastructure and the supply chain linkages to do large scale, volume manufacturing.

“Make in India” also does not mean the creation of large numbers of heavy, polluting factories, a la the “dark Satanic Mills” of old that dotted Industrial-Revolution-era Britain, and later, the United States. The era of environmentally insensitive factories is effectively over: they have been pushed out of developed countries by and large, and the NIMBY factor (Not In My Back Yard) alone will ensure India doesn’t go down that path. Besides, we tried it before: all “those commanding heights of the economy” heavy industries and “temples of modern India” beloved of the Nehruvian generation have turned into so many white elephants, some of which have lost their entire capital due to inefficiency.

Even though it is true that MSMEs (medium and small-scale industries) do provide much of the employment in India – Professor Vaidyanathan of IIM Bangalore has chronicled this in “India Unincorporated” – scale issues may prevent them from becoming global leaders. Just look at the companies in India that have become major players. Many of them, such as Bharat Forge, or Airtel, or Infosys, have all grown large rapidly, because scale matters. The counter argument is that Germany’s mittelstand (middle group) of MSMEs have been their economic engine; but that may well be the exception that proves the rule. However, my belief is that it is large companies that will be “making in India” as MSMEs don’t have access to highly skilled experts; nor are they focused on niche markets and scale.

Finally, “Make in India” couldn’t possibly be about the traditional Asian mode of development: starting with low-tech, high-employment sectors such as textiles and running shoes, and slowly moving up the ladder, as virtually all of East and Southeast Asia did. There is a simple reason for this: all of those countries first developed their education system so that almost 100% of their workers had a good primary education. They are literate, able to follow simple instructions, and also disciplined and not fractious. None of this applies to India, as we concentrated on tertiary education, and our people are prone to be unruly.

No, there is no way India could do a China 2.0, as that particular train “left the station” some years ago, to use the picturesque American idiom. The world doesn’t need another China; and anyway, if some multinational did, they would rather go to Vietnam or Cambodia or Laos or Myanmar for lower wages and docile workers. And so they have, as low-end manufacturing moved out of China.

What, then, could “Make in India” be about? Here’s one approach. The theory of comparative advantage, articulated by David Ricardo some centuries ago, suggests that countries (and companies) should make those things they are able to make better than anyone else. For other things, they should trade. Then there is the idea of “core competence” as defined by the late C K Prahalad: a capability that can lead to not one, but a sequence of products (or services), provides significant value to users, and is hard to imitate.

What is India’s core competence? I can think of a couple which may be non-controversial, and one that may surprise. The fairly obvious ones are in innovation and agriculture, the surprising one is in light industry. Let me explain. India was historically a world leader in innovation and the generation of intellectual property, as we will discuss below. India, given its diverse climate zones and with 56% of its land being arable if irrigated (in comparison, for China + Tibet it is only 14%), has also been an agricultural power.

The surprise is the light industry part. As explained in Angus Maddison’s magisterial history of the world economy from 1 CE to 2000 CE, India was for most of that time the largest economy in the world, until it was severely disrupted by British imperialism in the 18th century CE. There were four river deltas (two in India: Brahmaputra and Kaveri, and two in China) which among them accounted for a notable chunk of world GDP.

The Indian subcontinental deltas, close to the Dhaka-Calcutta area and to the Chennai-Thanjavur area, were full of light industry, including high-end textiles (as in the famous “Dacca muslin”), steel (carbon-nanotube-infused wootz, the best steel in the world), leather, metalworking, pottery/ceramics, and so on. After their victory in the Battle of Plassey (1757 CE), the British systematically destroyed these industries, turning hitherto prosperous artisans into wretched landless laborers, which they indeed remain to this day, a permanent underclass.

What of innovation, then? Innovation has become an oft-repeated mantra in corporate board-rooms and in policy circles as a panacea for some of the ills of industrial economies. However, it is a little-appreciated fact that India has historically been one of the most innovative cultures in the world. It may well be on the way to creating new innovations in many areas, if only the environment were suitable.

It is necessary to also make a distinction between invention and innovation. Invention is the art of discovering or creating something altogether new; and it is the realm of creative geniuses such as Thomas Edison (the incandescent light bulb), or Panini (context-free grammars), or Madhava of Sangragrama (infinite series for trigonometric functions).

It is an altogether different matter to turn an invention into a widely used (and/or commercially successful) product or service. For instance, Bell Labs invented the transistor, but it took the market-savvy Sony to turn it into a success, with the portable transistor radio. Panini invented context-free grammars 2,500 years ago, but IBM computer scientists turned that idea into computer languages in the 1950s. Invention and innovation are complementary, and one may happen without the other. For instance, the innovation success of low-cost airlines came without any particular invention. And some clever inventions, for instance the Tata Nano, has not become a market success, viz an innovation.

Indian inventions and innovations are legendary. There is of course the zero and Hindu-Arabic numerals, arguably the single greatest invention of all time along with the wheel and fire. Then there are yoga, ayurveda, meditation, Panini’s grammar, Madhava’s infinite series, Bharata’s natyashastra, but also Susruta’s surgical techniques, the Iron Pillar, the domestication of rice, martial arts (eg kalari payat), designs such as kolam, traditional knowledge such as atiratram, high-impact intellectual property; the list is endless.

There is an interesting, and revealing, contrast between India and China in innovation.  The vast majority of Indian inventions and innovations are abstract. The Chinese have highly concrete inventions and innovations: for instance paper and printing, gunpowder, the magnetic compass, the great wall, and  so on. If the world is moving towards abstract thoughts, that suggests Indians will do somewhat better over time in the innovation race than the Chinese. More individualistic Indians are more likely to come up with abstract inventions.

So I submit that for “Make in India” to be successful it has to depend on an Indian competence, which I think is in highly-engineered goods. India does have excellent engineers, and they can accomplish world class “frugal innovation”, as seen in the Tata Nano and the Mars Orbiter Mission, and earlier in the Param supercomputer.

If that premise is accepted, then how do you encourage people to innovate? One answer is to encourage the creation of intellectual property. There is again a contrast: between India’s traditional, what might be called “open-source” innovation, and current global IPR regimes. People in India invented things and just put them in the public domain where they might get traction: nobody particularly cared to claim the knowledge as theirs, and in fact we have to wade through obscure clues to deduce that it was possibly Brahmagupta who invented the decimal number system.

This paradigm is the exact opposite of today’s global practice of strong intellectual property rights, which enable the inventor to enjoy a private monopoly over the fruits of their labor for some period of time before it becomes public property. The arbiter of this perspective is the WIPO (World Intellectual Property Organization) and especially its TRIPS framework (Trade Related Intellectual Property Rights).

Under TRIPS, there are accepted flexibilities that nations may legitimately use. India has adhered to the letter of the law as well as the spirit of TRIPS, and worked within its framework. The draft national policy on Intellectual Property Rights (Disclaimer: I am a member of the IP Think Tank that produced the draft, but my comments here are personal) is currently under inter-ministerial review.

The idea is that there is a virtuous cycle: strong IP laws that encourage inventors to claim their rights will lead to innovation; that will lead to viable “Make in India” initiatives. Admittedly, the correlation between strong IPR and innovation is not strong. Nevertheless, enabling an ecosystem for IPR should help those who wish to create and protect inventions and to turn these into viable products, thus leading to innovation. With proper infrastructure and funding, these inventions can become proper innovations, which will be a big step to bring “Make in India” to fruition.