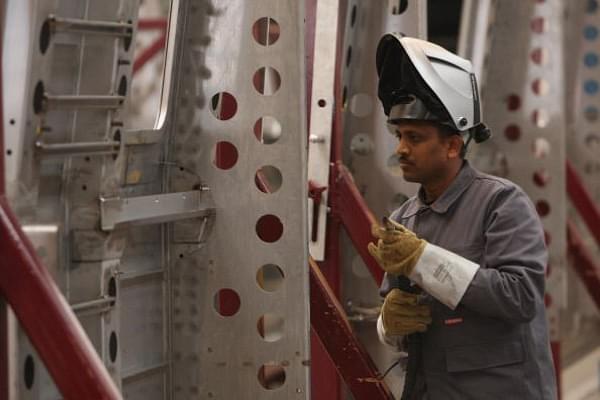 The use of big data is making some progress worldwide as an alternative source of employment data. Recently, advanced countries are pushing for big data more intensively for policy purposes, but India is still to join such a bandwagon. Currently, Brookings institute, U.S. Federal Reserve Bank, Governments of Singapore and Canada are using this methods to track employment. Leading firms like "Burning Glass" and “Wanted Analytics” in USA are two top companies who are generating these insights.

In India, for tracking employment data (both formal and informal), one needs to look beyond conventional survey data because of the erroneous conclusions that it often conveys. For example, the Centre for Monitoring Indian Economy (CMIE) said there could have been as many as 1.5 million jobs lost due to the withdrawal of high denomination notes announced by the Government of India in November 2016. This conclusion was arrived by comparing the January to April 2017 employment number from a CMIE survey with the figure from September to December 2016. Now, using this logic of quarter-on-quarter change and applying it to NSSO (National Sample Survey Organisation) data between January-March 2012 and October-December 2011 shows the number of workers declined by a whopping 19.6 million when there was not even any policy change like demonetisation.

In January, Pulak Ghosh of the Indian Institute of Management, Bangalore and Soumya Kanti Ghosh, Chief Economist for State Bank of India (Ghosh & Ghosh) published their work on trying to estimate the size of payroll jobs in India. It was an exercise aimed at calculating both the stock of payroll (or, formal) jobs and the creation of payroll jobs.

The authors did not claim that all payroll jobs that were estimated to be created were new jobs. They could be jobs migrating (or, upgraded) from informal to formal status. When firms cross certain exempt thresholds, they register with statutory authorities and those employed by them become formal jobholders. Nor did Ghosh and Ghosh claim that India was creating enough jobs to satisfy all entrants to the labour force. Nor did they say anything about the quality of jobs.

To avoid erring on the side of overestimating job creation in the formal sector, Ghosh and Ghosh took into consideration enrolment into the Employees Provident Fund Organisation (EPFO) in the age bracket 18-25. In other words, they assumed, conservatively, that new enrolment in higher age brackets could be simply transitioning from informal jobs to a formal status. No job creation was assumed. To be sure, this could be the case even with those in the 18-25 group but the chances are lower and whatever overestimation there is, is offset by the potential underestimation of job creation in the higher age bracket. Second, they did not count those who missed even a single payment. There should be an unbroken record of payment into the Provident Fund. They excluded too all those who signed up to the Provident Fund under the government announced amnesty scheme for registration with EPFO. The only source of potential over-estimation was that the figures they took from EPFO were gross of retirement. However, they stated it upfront and conceded that the net figure might be lower.

Yet, their work encountered a fierce backlash. The resistance to their work started with the premise that India, under the present government, was not creating jobs. Therefore, the premise was that Ghosh and Ghosh was a whitewashing exercise on behalf of the government. It naturally followed that their work had to be rubbished. The most common critique of their work was that most of these jobs already existed and that structural changes like demonetisation and the introduction of the Goods and Services Tax (GST) merely accelerated their formalisation. Hence these are not new jobs. Now let us assume that this hypothesis is indeed true. If that is the case, such critiques are actually hailing the success of demonetisation and GST as formalising large parts of our informal economy. Also, does it not also imply that a formal employment (that was previously informal) with defined social security benefits is a blessing in disguise for our employees? Finally, even if hypothetically these jobs existed earlier, it confirms that India had been underreporting its payroll data.

Stalwarts from the Congress Party were quick (or, hasty) off the block to dismiss their work without taking time to understand their estimation methodology and conservative assumptions. Indeed, the official economic policy document of the Congress Party published in March 2018 continued with the uninformed criticism by calling their work, ‘dubious research’. It is a puzzle as to why Ghosh and Ghosh did not take them to court for it impugned their research competence and integrity. However, yours truly had examined their work and found it to be a rather good starting point for estimating payroll growth in India. In the process, I had written about the need for the government to make available EPFO, NPR and ESIC data to all.

Ghosh and Ghosh were given access to the data initially because they were commissioned by NITI-Aayog to undertake the study. Now, the Government of India has made available its data for the months September 2017 to February 2018 (total of six months) and one hopes that it would continue to be made available on a monthly basis with steady improvements in the content, the reporting and presentation of the data. In particular, ESIC data are confusing and the column headers are not clear. Much needs to be done for users and analysts to be able to understand the data correctly and interpret them meaningfully. That said, let us come to the interesting bit.

To recall, Ghosh and Ghosh estimated that India created around 590,000 jobs per month in the current financial year 2017-18. Without including data from ESIC, they estimated that the number would be 510,000 jobs per month. So, 6 million to 7 million formal (payroll) jobs created, as per their estimate. They had data up to November 2017 and India’s financial year runs from April to March. Hence, based on eight months of data they had examined, they projected for the full financial year.

Sticking to the conservative methodology adopted by Ghosh and Ghosh, we can figure, based on EPFO and NPF data, that in the six months between September 2017 and February 2018, India had created 2.2 million payroll jobs. This estimate is more conservative than the one given by Ghosh and Ghosh because EPFO data are net of de-registration. Second, I have completely ignored ESI data – 100 per cent haircut. But, I can do better than that, thanks to Ghosh and Ghosh.

After the release of these three reports, Ghosh and Ghosh have updated their work published in January. If we recall, they had actual data up to November. Now, the government has released figures up to February 2018. Including an estimate for March, they calculate that the total FY18 payroll as per EPFO record would be 5.1 million. Add another 700,000 from National Pension Register. That takes us to 5.8 million. Ghosh and Ghosh add another 880,000 from ESI data. They think that it is still likely an underestimate because around a quarter million of newly registered employees in the age category 18-25 are paying ESI contributions every month. Adjusting for overlap with EPFO, the number could easily be a million or little over that. In sum, the total payroll (new formal jobs) in financial year 2017-18 is likely around 6.8 million – closer to the estimate that Ghosh and Ghosh had presented in January.

Does it mean that India has no employment problem? Far from it. Neither Ghosh and Ghosh said so nor am I saying so. There are many reasons to believe that India is far from addressing its labour market challenge.

First, data quality has considerable room for improvement. Whether it is employment data or national income accounting data, reliability of the reported numbers is rather poor. One test of reliability is their consistency with other pieces of evidence and reports available. For example, capital formation in the non-financial private sector has hardly declined in the national income data. That is inconsistent with data presented by the Reserve Bank of India (RBI) every September, based on bottom-up reports furnished by companies on their capital expenditure plans. Further, the swings in the data from year to year are too big to be cogent and credible.

In order to improve the trustworthiness of the official data, they need to be cross-verified and cross-verifiable with private estimates. Private sector can tap into big data, as mentioned earlier, to generate its own understanding of employment trends in the country. For example, ISRO data can be used to track new factories coming up. Google key word search can be a good indicator of job demand in a region. For example, if in a particular region many people are looking for jobs, one can expect that employment related search query in that region will be higher than in another region where job demand is low. We can actually track this daily/ weekly and put a hotspot on major metros in India to understand the demand for jobs.

Second, India is reportedly adding about 15 million people to the labour force every year. Therefore, even with 7 million payroll jobs, India is not even finding jobs for half of them. The work is half done or less than half done. Indeed, as per the quarterly consumer confidence survey of RBI, households perceive their employment prospects to have considerably dimmed in recent months.

Third, we do not know much about the wages attached to these jobs. They may be low pay-long hours jobs and may not be ‘permanent’. That is, they may be contract workers hired through temporary placement firms.

Finally, recent reports on the number of applicants for jobs in the government-owned Indian Railways and for recruitment into the police force of the state of Maharashtra underscore the challenge of job creation that India faces, regardless of the above estimate.

All that being said, yours truly has always maintained (not that it is very profound) that sound policymaking starts with good data. On that, the Government of India has made a very good beginning. Employment generation is the raison d'être of elected governments. It is what gives them legitimacy. The government has done well to put the data on public domain. This may rob some people of the pleasure of frivolous nit-picking and of the opportunity to indulge their unfounded and dubious prejudices. But, the rest of us in the country are better off for this ray of transparency.