Unintended consequences - tales from the Mahabharata 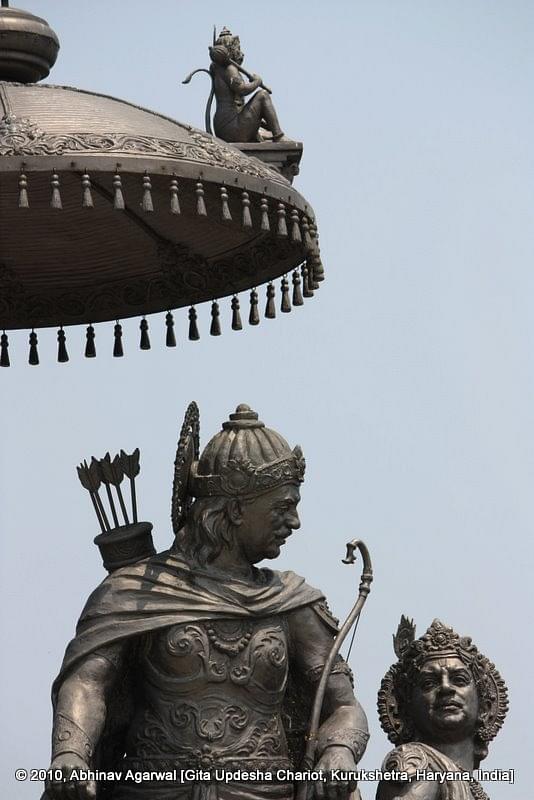 While everyone has their favorite story or episode from the Mahabharata, and most have more than one, I have found the theme of unintended consequences to be the most fascinating one. Actions taken not only have reactions, but unlike the Third Law of Motion, actions also have quite unexpected results at times.

The story of Abhimanyu and how Jayadratha became the stumbling block in the efforts of the four Pandava brothers to rescue him from within the fearsome chakra vyuha is well known. If not, then that is a topic for a future article! Here I will talk about a little known but equally potent illustration of unintended consequences from the Mahabharata.

That Indra was an insecure god is well known. That he also needed to be taught lessons in humility is also well known. Prajapati Kashyapa was conducting a yagna to obtain a son. At this sacrifice, Indra, among others, was given the task of fetching firewood for the sacrifice. On his way back with “firewood that was as large as a mountain”, Indra spotted the tiny as a thumb valakhilya rishis struggling to carry a single leaf of a palasha tree. The vain Shakra (Indra) “contemptuously” laughed at them, “stepping over their heads”.

Now, if you don’t do one thing it is make fun of the learned – “their words are like poison, their anger is fearsome”. Indra should have known. But didn’t.

The angered valalkhilya sages decided to teach Indra a lesson. They initiated a sacrifice of their own, one that would create another Indra and who would “bring great fear to the present king of the gods.” An understandably alarmed Indra approached Kashyapa, requesting his intercession.

Sage Kashyapa agreed, and intervened on behalf of Indra, requested the valakhilyas to not create another Indra, as it would disturb the order that Brahma had created by appointing the current Indra as “the lord of the three worlds.”

The valakhilyas agreed. But like an arrow that had been fired, a sacrifice could not go in vain. An Indra had to be born. Knowing this, Kashyapa suggested that the valakhilyas instead create an Indra for the “winged beings.” The valakhilyas agreed to this too. Thus Garuda was born as the king of the birds and skies, and Indra’s throne stayed secure.

But where is the twist?

You may have guessed; Garuda was born to Dakhsyani Vinata, Sage Kashyapa’s wife!

The valakhilyas told Kashyapa as much – that their act of creating an Indra was also something that the sage himself wished for, since he had also been conducting the sacrifice to obtain a son – remember the sacrifice where this whole fracas began?

Both Indra and the valakhilya sages served at Prajapati Kashyapa’s sacrifice. The sacrifice was to beget a son for Kashyapa. Indra’s folly led to the valakhilyas conducting their own sacrifice to create another Indra, as Kashyapa’s son. Kashyapa’s intervention resulted in a diminished Indra (in some ways at least), Garuda, being born.

Had sage Kashyapa known in advance what his intercession would lead to, would he still have done what he did? Why would, you may wonder, he knowingly act in a manner to harm himself? Would Garuda not have been born then?

Or is history really immutable, and finds and has its way, despite the knowing and unknowing intentions of the best and the wisest? Does the below immortal shloka of the Gita, itself a part of the Mahabharata –  play itself out over and over again in the epic that is the Mahabharata?

And that, may well be the most profound lesson of the epic with a lakh shlokas.

Note: I have used Dr. Bibek Debroy’s “Mahabharata”, Vol. 1, an unabridged English translation of the Critical Edition of the Mahabharata, published by Penguin India in 2010, for reference. The story here is described in the Adi Parva. Specifically, Chapter 27 of the Adi Parva, and the Astika Upa Parva.