Aiyo Parameshwara, If This Is Your Solution to Bengaluru’s Traffic Problem, God Help Us 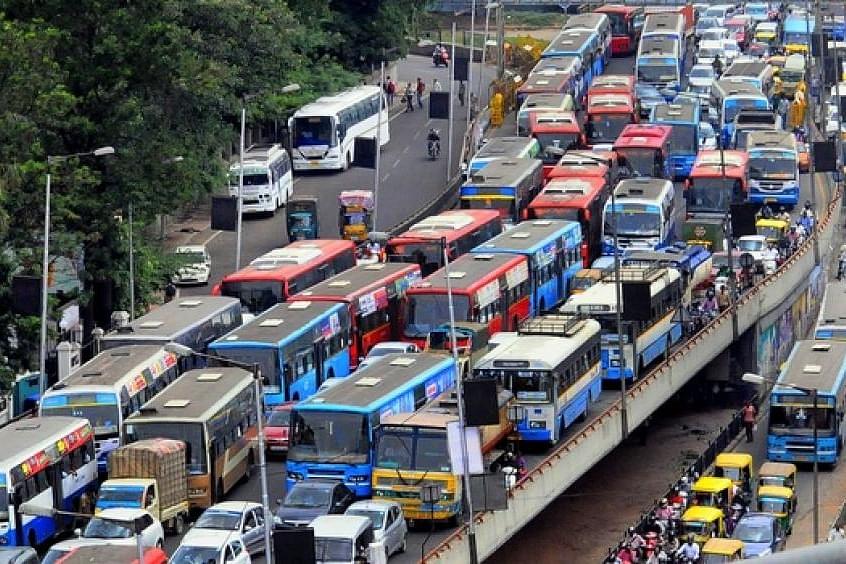 Present politicians with a problem, and more often than not they will come out with solutions that are worse than the disease.

We all know Bengaluru, like Delhi or Mumbai or Chennai or Kolkata, is choking with construction-related pollution, and bumper-to-bumper traffic is adding to it. It is only a matter of time before the courts will think that banning Diwali or fire-crackers is the solution.

But what solution does G Parameshwara, Deputy Chief Minister, and guardian minister of the Karnataka capital, have for this problem? This is what he has said in an interview to The Economic Times today (29 October). “I am thinking of requesting the transport department to temporarily suspend (the) registration of new two- and four- wheelers in Bengaluru for two years, and deny fitness certificates to vehicles that are 20 years old. How else do we deal if 2,500 vehicles (are) add(ed) to our roads every day? This is our loud thinking, and after the bypolls are over, I plan to hold a meeting with the Transport Minister, and BBMP and BDA Commissioners to hear their views.”

If this is the quality of his “loud” thinking, one shudders what else he may be planning quietly.

If stopping registration of new vehicles for two years is supposed to be “temporary”, one wonders what would be permanent. And if stopping registration is a solution for congestion and pollution, why haven’t most states done so? Banning this or that is never a solution to anything; if registrations are banned in Bengaluru, more vehicles will be registered in neighbouring districts or states, and the number of cars and bikes on Bengaluru roads will hardly fall.

The funny thing is his reply to another question identified the right (short-term) solution, and then wandered off into a non-solution (not allowing new registrations). “There are about 15 lakh people using the 6,000 BMTC buses. We are also in the process of introducing some electric buses. We can buy more buses, but where are roads? We will end up choking our roads further. There about seven million vehicles on roads now. We will need to reduce private vehicles to make space for BMTC buses.”

Exactly, the problem of “where are the roads” can be solved by putting more buses on the roads, and taking private vehicles off them. And doing this may actually be simpler than one assumes. All you need to do is to increase taxes – shift from a one-time registration charge for new vehicles to annual registration charges, and impose congestion charges. To decrease congestions in some very highly-used stretches (like Outer Ring Road, for example), one can force all cars to pay daily tolls electronically. If all cars are mandated to use prepaid RFID tags and sensors quietly deduct tolls as they pass specific areas, congestion will fall. And the money collected can be used to double or even triple the number of buses on roads, even while we wait for metros to come up. One reason why metros take very long to build is traffic: it is tough to close down heavily-used roads to allow for the digging and construction to take place. Once traffic is restricted by taxing private cars more on such stretches, buses can be subsidised, and the lower congestion can help speed up the work on the metro. The solutions are inter-related.

While one can test the above solution out in specific roads and areas (like the central business district) before spreading them to the whole city, in the short run – while the RFID chips are universalised and sensors are erected – cars can simply be banned from using some major roads during peak hours. Additionally, all offices situated along busy traffic routes can be asked to stagger their work timings. More shuttle buses can be run along stretches where cars are banned. Banning registration is no solution.

The problem with Bengaluru is not less roads, but too little positive thinking on better traffic management, higher taxation of private vehicles, and introduction of public transport. The answers to the problem are obvious. Parameshwara needs more clear thinking, not just “loud” thinking.

India Has Nearly As Many Vehicles As Households; Bus Karo! India Cannot Be Car Country Like US