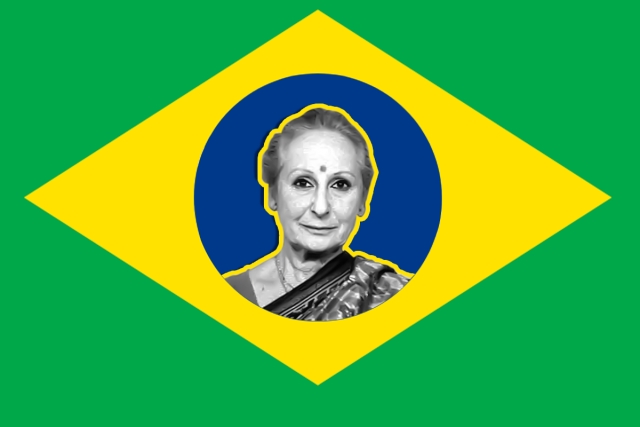 Amazon forest fires are raging. Reports speak of more than 72,000 such fires in 2019 alone.

In this context, it is of importance to read and reflect on the works of an eminent Brazilian biologist, Dr Marta Vannucci.

Vannucci the first woman scientist to be elected member of the Brazilian Academy of Sciences. She has written about the Vedic conceptions of environment and how the Vedic seers understood the dynamics of ecology.

Born as an Italian in 1921, her father was a scientist and her mother was a mystic. Vladimir Besnard (1890-1960), considered as the father of Brazilian oceanography, invited her to be part of his research team. This project would later become Brazil’s first research institute dedicated to the oceanographic sciences.

Even in the 1950s, in her studies, she emphasised on the importance of studying the organism and the environment as a whole.

In an article published in 1957, Marta used a term that Julian Huxley had coined in 1940 — the ‘New Systematic’.

She wrote that for the New Systematic, we need to recognise the fact that what we have before our eyes is only a certain phase of a long chain of forms in continuous evolution.

Hence, the ecological dynamics and geographical distributions need to be taken into consideration and mere morphological data is not enough.

She then applied this to her own studies of planktons.

Aged 48, she associated herself with UNESCO for studying different human cultures and their ancient knowledge systems — a legacy that would have come from her mother’s side.

During this phase, she became more and more enchanted with Vedic literature.

Dr Densie Navas-Pereira, a colleague of Vannucci’s, points out how she combined her talents in organised ecological studies with the local conditions of the places whose philosophy she studied:

Studies of traditional scientific, philosophical and artistic knowledge, specially those reflected in the Indian-Vedic-Brahmanical tradition, gradually became the raison d’être of her existence, though she never abandoned her scientific work...Much personal work and time has gone into water resources management and study of medicinal plants, specially in the Himalayan hills and valleys.

Her two books, The Ecological Readings in The Veda Matter-Energy-Life (1993) and Human Ecology in the Vedas (1999) critically examine Vedic literature for what we can learn from the perception of the Rishis.

To her, the Rishis representing the Vedic man experienced ‘the whole universe holistically ‘ and were ‘awakened to the Cosmic law and order’.

In her works on Vedas, she learnt from great giants of Vedic literature and Indian culture like Prof. R N Dandekar and Dr Kapila Vatsyayan. Her humanistic humility comes out in the very preface of Ecological Readings ...:

Her attempt at interpreting the Vedas was ‘as a biologist ... biased by trying to decipher the code with a bio-ecological key.’

Yet, she did not impose her own assumptions on Vedic literature but tread on the steps of great Vedic commentators like Sayana.

As we enter her works, we see an independent emergence of striking similarity (not absolute sameness) with the works of Sri Aurobindo and Ram Swarup.

Consider the following as a sample of the way she approaches her subject:

According to Sayana, in Rig Veda, ‘great happiness’ means ‘perfect knowledge’ or the transcendental knowledge of Brahman; we could perhaps add-also of factual knowledge. ... The eagerness and need to understand is eloquently expressed in Rig Veda where Agni signifies Truth or Knowledge and as such is the expression rather than the manifestation of God; he is the “loved and loving one” who, together with the Angirasas made the way to reach heaven and who burst the fortress of ignorance.

Particularly of interest to us is what her decoding of Vedic literature with her ‘bio-ecological key’ reveals about the relation of humans to that great natural ecosystem, with which Vedic humanity had to interact intimately — the forests.

Though a believer in Aryan theory (as most of the scholars of her time), she did not base her reading of Vedic literature obsessively on ‘amicable or not-so-amicable contact’ between the so-called ‘Arya’ and ‘anarya’.

At the outset, she points out how errors can seep in when ‘interpreters’ of Vedic literature sitting in their libraries, far removed from the original natural settings of Vedic seers try to interpret them.

She also points out how Vedic literature reveals one of the most enduring aspects of a pan-Indian civilisational phenomenon — sacred groves — an epitome of the Goddess, who has evolved into diverse regional forms how She forms the connecting element.

Trees, forests, rivers, winds would be the good providers but also a constant menace when unleashed in their fury. A whole hymn is dedicated to the lady or Goddess of the forest: Aranyani (RV. X; 146), “the mother of all forest beings who tills not but has stores of food”. The hymn also shows that flora and fauna were studied carefully. To this day the deity of sacred groves are Goddesses: I know of only one exception which is the very ancient masculine Puttu in Tamil Nadu who is the presiding deity of a mangrove sacred forest. The Goddess of the Sunderbans in Bengal is called Banodebi or Banobibi and is prayed equally by Hindus and Muslims who would never venture into the forest without invoking her protection. .

‘Ecological Readings in the Vedas’ (p.92)

In passing, she mentions how ‘the sacred forests’ which are ‘ specially significant in the Hindu and Buddhist cultures ‘ were 'undoubtedly a pre-Aryan concept' but 'was probably adopted by the immigrants' and that 'forest use and management would have been learned by the newcomers from the local inhabitants' (p.101 & p.102).

In her next book Human Ecology in the Vedas (part of the series on ‘Reconstructing Indian History & Culture’. Published in 1999 ), she distinguished ‘Vedic and Vedic derived philosophies’ from theistic religious dogmas:

Judaic, Christian, Islamic philosophies willfully disregarded the obvious changes over time and the evolution of everything in the universe. One of the great merits I see in Vedic and Vedic derived philosophies, and other oriental philosophies is the recognition that nothing is ever static, everywhere in the universe.

‘Human Ecology in the Vedas’, p.viii

In both her works (which overlap in contents), she makes an observation which is relevant to some of the present day controversies. While discussing her reading of ecological concepts in Rig Veda, Prof. Dandekar in a personal communication 'objected to her reading science in the RV saying that no scientific theories were developed by the Rishis.’ Vannucci writes:

This is correct in the contemporary acceptance of the expression scientific theory... Though the ancient rsis probably did not see the need to knit together the knowledge acquired into a well defined and formulated whole or theory having general validity, they did recognise the importance of factual knowledge and of the establishment of cause and effect relationships for the understanding of the phenomenological world.

She then takes the example that Dandekar gives — the intense devotion with which Rishi Vasishta praises asura Varuna.

...  Dandekar rightly recognizes in Rsi Vasistha that asura Varuna is the embodiment of all understanding and that he himself and He alone is the explanation of the universe. since He is the asu of the universe, the infinite magical power that permeates everything. Originally, Varuna is himself the theory.

More relevant to the present scenario of burning forests is Vannucci’s commentary on the short Rig Vedic hymn on Aranyaani — ‘the Lady of the Forest’. Here, the 14 pages of her commentary become an important protocol for human engagement with a vital planetary natural phenomenon like forest. She says:

Here, however, the forest stands not only for our present concept of a forest which is a natural or man-made formation with tall trees and undergrowth, but the word aranya is used also for jungle in general including savannahs; at present, it can also be used for all sorts of un-tilled and uncultivated natural areas. In other words, Aranyanni is the mistress of wild vegetation and of all the animals associated with it. ... She is the root concept of ‘sacred forest’ and is best designated with the contemporary use of the word jungle, which is also feminine... Aranyaani and Prakriti are manifestations and materialisations of Godhead, they are their embodiment governed by Rta. They are different aspects of Rta, the structure and dynamics of the universe that must be accepted and respected as such and of which we ourselves are part. Rta is what is and cannot be changed by man.

Today, the Amazon forests are burning. One of the major motivating forces for their burning is the meat industry — particularly beef. Brazil has become the world’s largest beef exporter.

Alexander More, a climate change historian at Harvard University and the University of Maine points out:

Certain countries are driving meat exports from all nations surrounding the Amazon, attempting to feed a beef frenzy that did not exist only a few years ago. This is driven by culture, economic development, a feeling of entitlement, but certainly not need.

On the question of humans taking in excess from nature, Vannucci had specifically written:

...while contemporary scientific research established the foundations of ecological theory on which rational use and management of nature must be based, the ancient Indian sages, the Rishis, had already established the foundations of an ecologically sound way of life some three to four thousand years ago, or earlier. The ancient traditional Indian way of life was objectively correct, rationally sound and ecologically valid. The ‘Indian way of life’ has been tested by time and has survived to the day, but it is swiftly being eroded away by human population pressure, or the excess of individuals of one species: Homo sapiens.

Current technology gives humans overwhelming superiority of most of nature. And this is where Vannucci cautions humans, especially the West:

A radical difference between the Indian cultural tradition and the Western traditions is that the Indian cultures, and we could generalize for much of Asia, seek wisdom, while the Mediterranean and European cultures in general have traditionally pursued knowledge as the summum bonum to which man can aspire. Among all the traditions and all men, knowledge has frequently been used unwisely forgetting that knowledge without wisdom may become very dangerous indeed. In fact, the concept of asura in post-Rgvedic times, is that of a creature with much knowledge and power derived from knowledge, but no wisdom; arrogance having replaced wisdom.

‘Human Ecology in the Vedas’, p.167 (emphasis in the original)

The spark that started the Amazon forest fire is in all likelihood the Asuric heart of humanity. The solution, as this Brazilian ecologist discovered, is in understanding Rta and moving in harmony with it, which is Dharma.