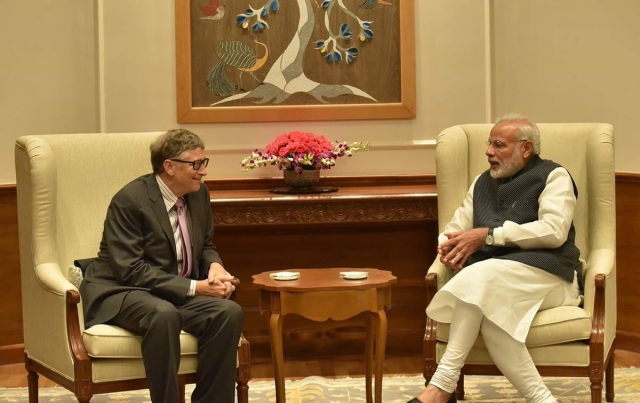 Even as armchair critics leave no stone unturned to tag the central government’s sanitation and public health schemes, mainly the Swachch Bharat Abhiyan, mere eyewash or tokenism, look who is vouching for Prime Minsiter Narendra Modi’s work in this direction.

World’s richest man, Microsoft founder and philanthrophist Bill Gates is all praise for the campaign which was kickstarted by the Prime Minister, unabashedly speaking of toilets in his first Independence day speech.

Gates, in his blog, wrote a piece titled ‘India is winning its war on human waste’, lauding the steps taken by the nation to deal with dirt and disease. He applauding the speech as “one of the boldest comments on public health that I have ever heard from an elected official...” .

Quoting portions of the speech wherein the Prime Minister spoke of the difficulties women in the country have to face owing to lack of toilets, Gates admitted that he couldn’t “ think of another time when a national leader has broached such a sensitive topic so frankly and so publicly.”

Impressed at the words having transformed into action, with the Swachch Bahrat campaign, Gates says “Modi backed up his words with actions” and has posted a short video titled Talking Toilets that talks about the same.

Gates goes gaga about how one man’s vision has translated into a massive change. “What I love most about Clean India is that it identified a big problem, got everyone working on it, and is using measurement to show where things need to be done differently.”

Calling it an inspiration for other countries, Gates signs off saying, “ By aiming high, the people of India are demanding change, and they are taking action to make it happen...”