How The Vedas Influenced Indian Astronomy Through The Ages 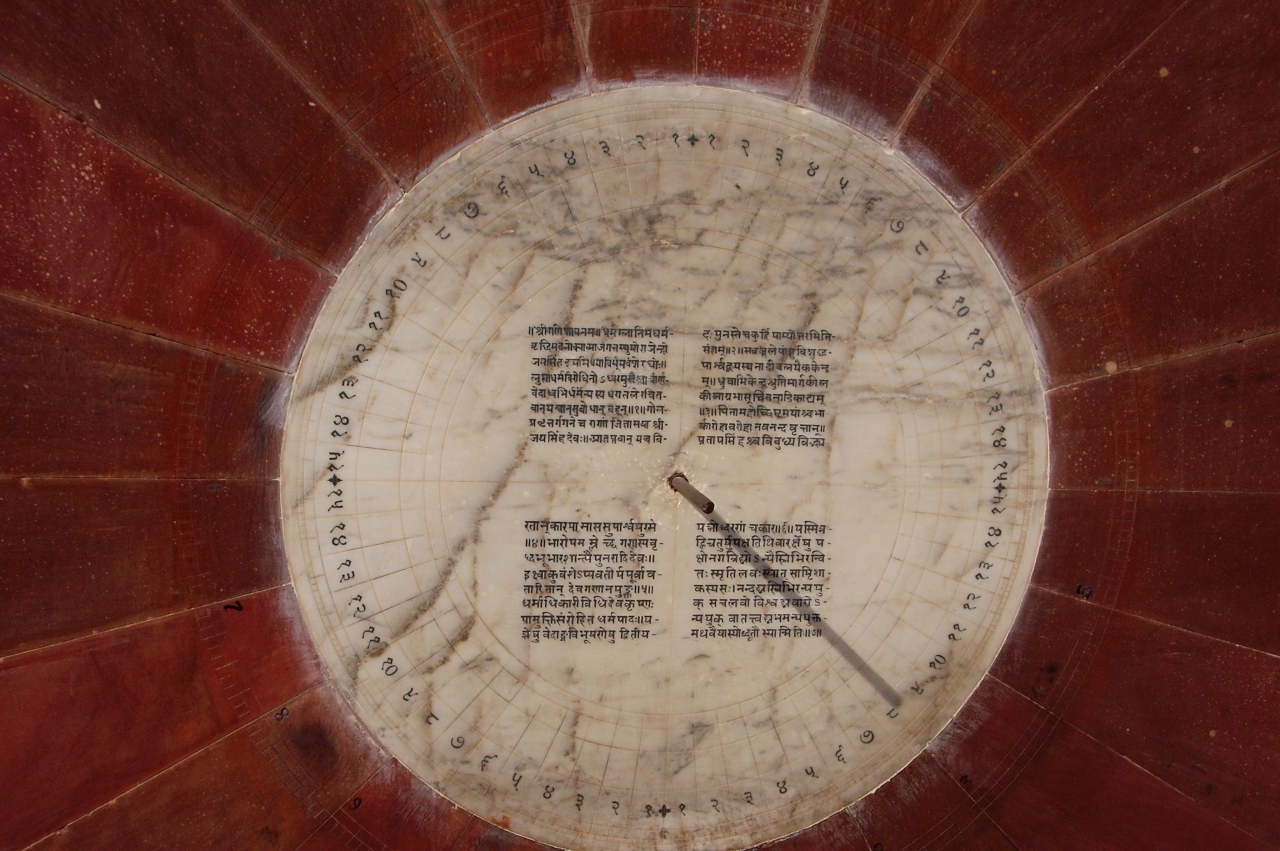 Vedic Mathematics is a more popular catchphrase than Vedic Astronomy. The adjective ‘Vedic’ has become associated with anything Sanskrit.

The four Vedas, though, are primarily slokas about ritual, prayer and philosophy. But numbers are mentioned, even revered; 28 stars, new and full moon, eclipses, seasons, days, periods, years, et cetera are mentioned. From these, we can glean some facts and deduce concepts.

All arts and sciences, of whatever variety that existed, had their own separate texts. Invariably, older texts or anthologies were discarded or forgotten over time, because newer compositions replaced archaic knowledge.

Panini’s grammar, for example, made 11 previous Sanskrit grammars obsolete. Even scripts of written languages underwent this change, as Brahmi and Kharoshti inscriptions in India, and Sumerian Cuneiform and Egyptian heiroglyphs show us.

As an aside: we rarely hear of Sumerian commercial mathematics or Pharaonic mathematics.

We don’t know what other texts or anthologies existed during the Vedic era. Also, the Vedas were transmitted from one generation to the next entirely orally.

If any other books were written or even transmitted orally, they are mostly lost to us. The Vedas, alone, because they were considered sacred, were passed on thousands of years later, unmodified.

No Indian astronomer, from Aryabhata in fifth century to Pathani Chandrasekar in the nineteenth century refers to the Vedas as a source of their astronomy or mathematics — they only refer to jyotisha siddhantas of earlier astronomers.

Nevertheless, some historical information may be gleaned from the Vedas.

Remember also, the Vedas are a compilation of various slokas of rishis – we don’t truly know the period of their composition.

The Puranas, and Vedic commentaries attribute yugas — millions of years — to history. Geology, archaeology, biology and anthropology consider Indian civilisation to be a few thousand years old; how many thousands is subjective.

Since it is least controversial, I call the period before the fifth century BCE as Vedic, without an upper bound.

The concept of solar (savana or divasa), lunar (tithi) and stellar (nakshatra) days co-existed, as we saw earlier. 28 Nakshatras are listed, but Abhijit was dropped, with no loss to astronomy. 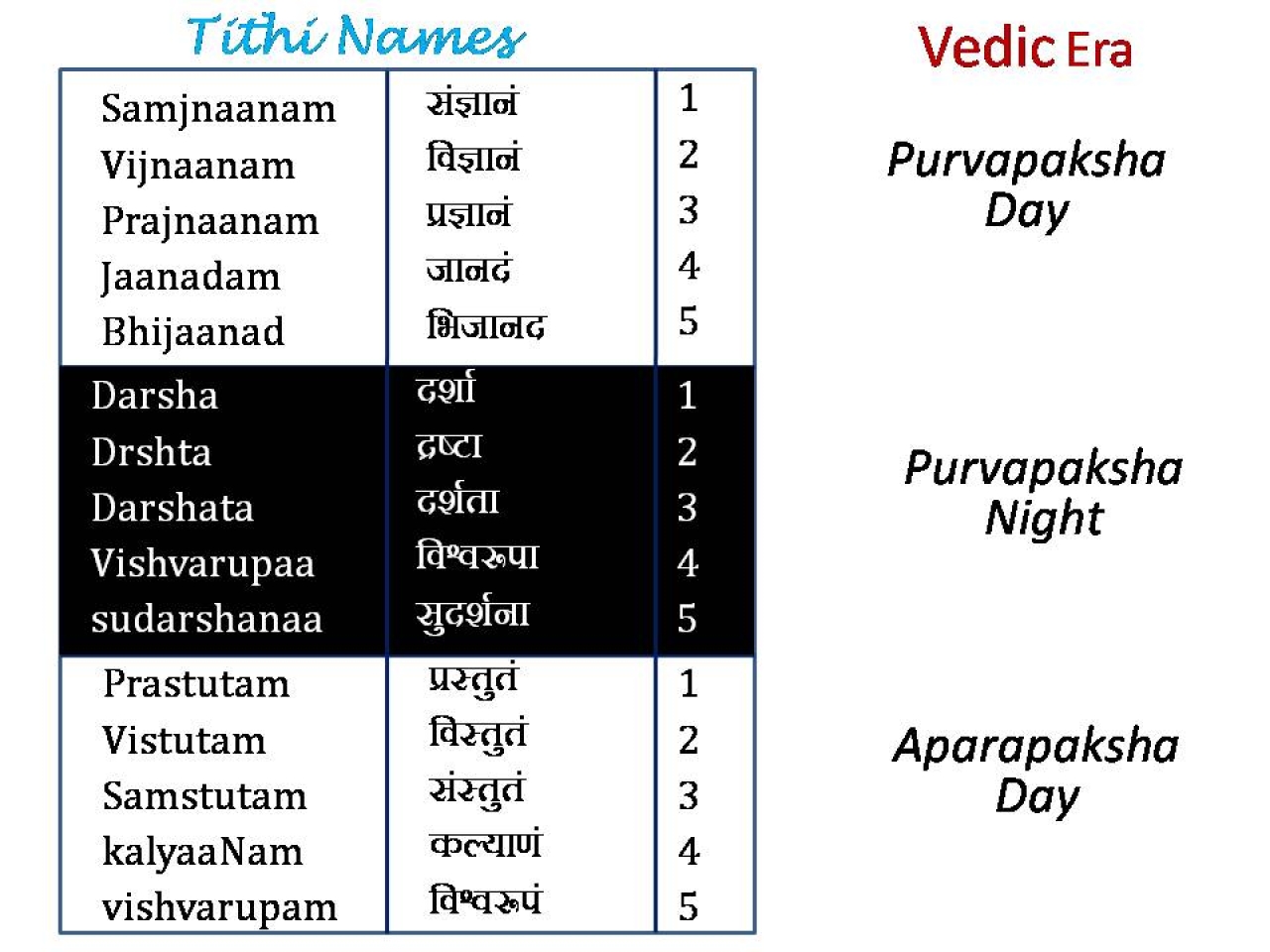 The 12 zodiac series from Mesha (Aries) to Meena (Pisces) was a later import, probably from Babylonia.

Moonrise or tithi is predictable. The opposite of tithi is atithi, which means guest. Perhaps because the arrival of a guest is unpredictable. What a magnificent astronmical pun.

This five-part division was at some point superseded by a division of the day into 30 muhurthas, 15 each for daytime and nighttime.

Today, we number the hours, from 1 to 12 or 1 to 24 (this is an import from Egyptian astronomy). But Vedic muhurthas were named, not numbered.

But the Vedas had names, not numbers, for each tithi. In fact, the tithis had different names for the day versus nighttime, and different names during the waxing (shukla paksha) versus waning (krishna paksha) of moon phase.

A sample of these names are shown in the accompanying tables.

Divisions of the Year

Just as the day was divided into parts, the year was also divided into days (Dina), months (Maasa), seasons (Rtu) and Ayana (half-years).

The months were named Madhu, Madhava, Shukra et cetera, not the Chaitra, Vaishaka, series we use today. 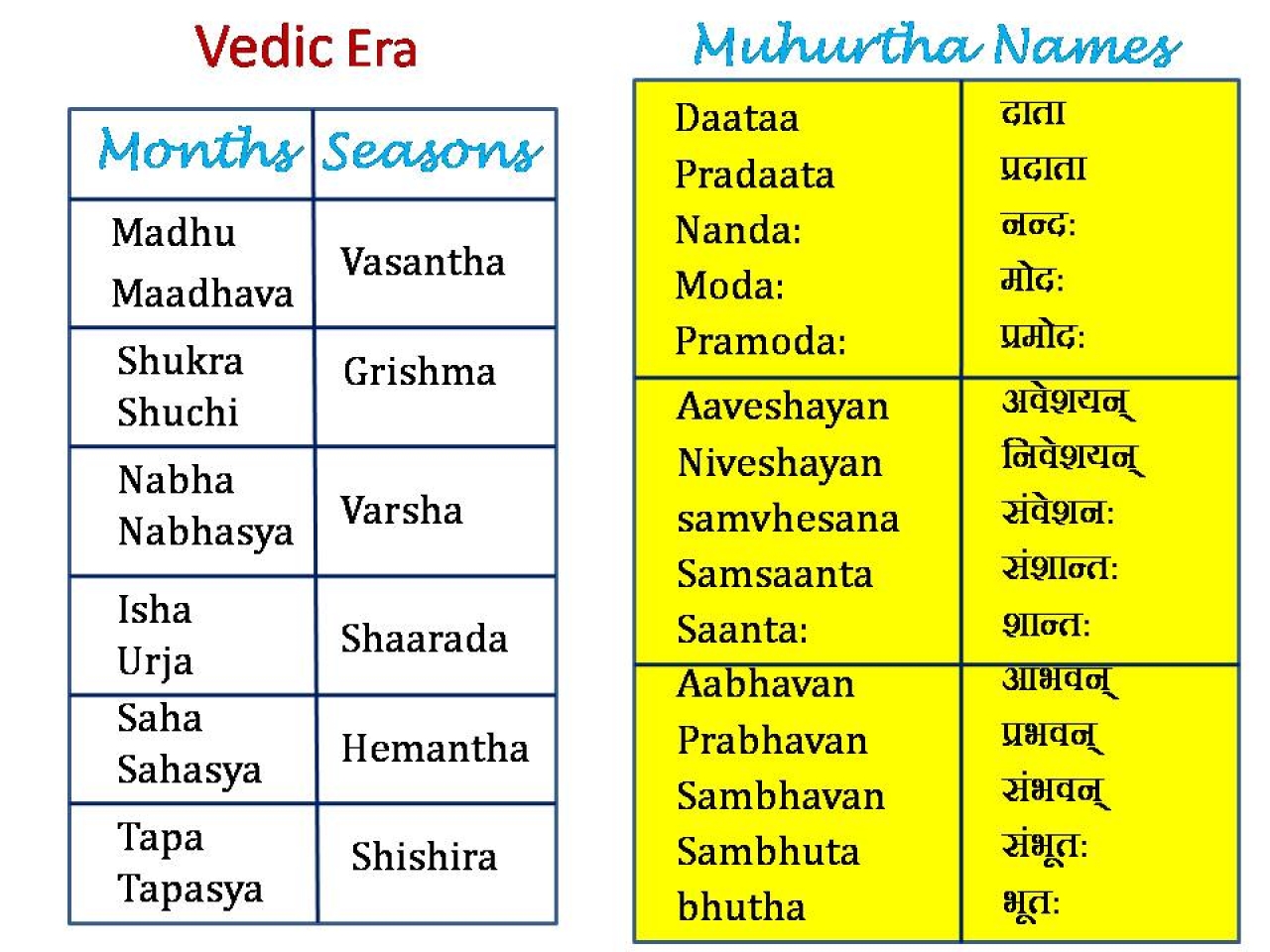 Disparity between lunar (the months were lunar; 12 months came to 354 days, but the solar year was 11 days longer) and solar calendars were observed, and to resolve this disparity, which threw the calendar off, the concept of adhika maasa was introduced. Adhika means extra. Basically, it was a leap month, similar to a leap day.

A five-year cycle after which five solar years and 62 lunar months aligned again, was called a yuga (which means conjunction).

These demonstrate that the concept of time evolved even during the Vedic period.

When the yuga transformed into a tremendous period of 4,32,000 years and a chaturyuga 10 times as long is unclear; this is the period the puranas mention. The five-year yuga is not even referred to by astronomers of the Siddhanta or Classical period, except Brahmagupta, who rejects it, and the entire Vedanga Jyotisha, without explanation.

A fine historical and philosophical anomaly — the very Brahmagupta who is dismissed as orthodox for rejecting Aryabhata’s alleged heresies — is not himself considered a heretic for rejecting an entire Vedanga.

The invocatory sloka of Vedanga Jyotisha mentions all these divisions of the year, saluting Prajapati, the Creator, as one whose limbs are days, seasons, months et cetera.

This is a common theme throughout the Vedas and Hindu philosophy: not only the Sun, Moon and planets, besides the Earth are considered manifestations of divinity, all celestial phenomena are described as parts of their divine bodies. Even numbers are considered divine, and offered salutations.

Everything was sacred, which rails against our perception of science today, when considering anything sacred is unscientific.

The Taittiriya Aranyakam 4.69 of the Krishna Yajur Veda has this sloka:

The Taittiriya Samhita 7.2.20 has this sloka:

Translation: Svaahaa to a hundred, thousand, ten thousand, lakh, etc..up to one trillion.

This prayer or offering follows a series of prayers to the first 20 natural numbers, odd numbers, even numbers, multiples of four, five, ten, twenty, forty and fifty. The religious significance is not my scope.

What they counted a trillion of, is an enigma. But these slokas demonstrate the use and understanding of decimal (base 10) numbers and large numbers.

Note the absence of the familiar laksha (lakh) and koti (crore). By the classical era, new names for some larger numbers emerged. Aryabhata, for example, uses koti for arbuda, and vrndam for samudra.

These are all names of numbers only, not mathematical operations or algorithms, which are explained in Vedangas.

Five planets are mentioned, but only Brhaspati by name, and Venus as Vena rather than Shukra.

The most famous constellation was Sapta Rishi, (a section of Ursa Minor), stars in the polar regions, which revolved around Dhruva, the Pole star. There is a beautiful poem, comparing stars rising after Vrkam (Sirius), as birds of heaven chasing the wolf.

The brightest star of the southern hemisphere suddenly became visible during this era. This star was called Agastya (Canopus) and linked with the story of the rishi who headed south, requesting the growing Vindhyas to stop until he returned.

Perhaps, the legend captures the period of a tilt in the earth’s axis, when the night sky at that latitude became on Aryavrata. Another southern star is called Vishvamitra, and three surrounding stars, Trishanku.

A prayer in Atharva Veda mentions comets (ulkaani) and meteors (dhoomaketu). Strangely, except for Varahamihira, no classical astronomer mentioned these objects.

This sloka refers to the rishi Atri “who set the press stone, revered the Gods, dispelled the illusions of Svarbhanu and restored the Sun’s light”, a reference to a solar eclipse.

“Atri and his sons alone could restore the Sun when Svarbhanu had covered him with darkness”, it continues.

By the era of the 18 Siddhantas, Indian astronomers understood eclipses, and could predict them. We will come to that after a look at the Vedangas.