How To Write About The Subalterns 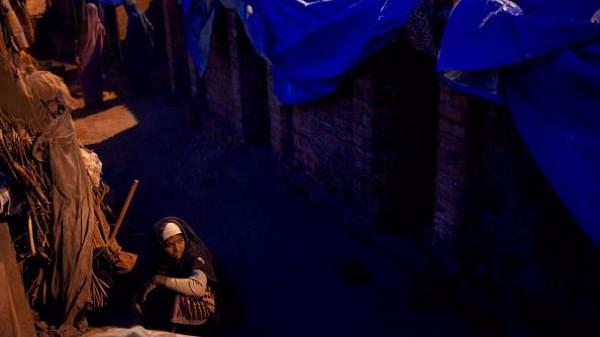 An Indian woman prepares food for dinner at the site of a makeshift home in front of the Jawaharlal Nehru Stadium in New Delhi, India. (Daniel Berehulak/Getty Images)

Today’s academic universe of the social sciences and its intellectual production resemble a limited service period in a university canteen or a roadside eatery. In the absence of a guaranteed supply of customers as during vacations, the canteen owner (who may double up as the cook) prepares a common hot and spicy gravy that can be poured onto fried eggs, fried paneer or fried fish so as to create an impression of a freshly prepared curry. The burst of flavours in the palate is so overwhelming that one forgets about the egg or paneer; all that he can admire or curse is the gravy. It is the gravy which subsumes the egg and virtually replaces the latter.

Our academic vocabulary is like the gravy; it drowns the specificity of the problem and leaves the reader only with words on the page. Empowered by theoretical jargon (borrowed from various isms that flood the academic market), which often draw attention to themselves rather than the issue at hand, academics produce knowledge like the egg curry in the preceding paragraph. It is the primacy of the theoretical framework or the critical vocabulary, which names and defines the problem and like the egg is buried under the gravy, finds a solution to the problem in the framework itself.

In an event castigating the Indian Army’s role in Kashmir and justifying stone-throwing incidents as the authentic expression of the oppressed, a speaker in an institute of national importance thundered that what Kashmir is experiencing today is nothing but majoritarianism and an experiment with the banality of evil (borrowing from Hannah Arendt). When a student wanted to know if majoritarianism in Kashmir referred to Islamic fundamentalism that not so long ago sanctioned the killing of Pandits and rape of their women, the honourable speaker clarified saying that majoritarianism cannot be region-specific but a pan-Indian feature and in this case it is Hindutva. The poor student resisted that majoritarianism always changes its hues and adopts a local character to respond to local problems. The speaker was non-committal though: “You see, if we raise these types of questions, it will dilute the potential of anti-fascist and liberatory frameworks. And then we cannot doubt the efficacy of the framework.” The young man was mystified, but the experienced ones knew, though could not offer help, that the framework survives on the seamless transferability of one term to morph into another, where patriarchy, fascism, Hindutva, Brahminism, capitalism all mean the same, and even may not mean anything specific at all.

Whether the framework and its vocabulary address the Kashmir problem or obfuscate it, is anybody’s guess. What is immediately clear is the priority and antecedence of theoretical vocabulary over the problem. Regardless of the problem of disgruntled Kashmiri youth or the displaced Pandits, the theorist or the intellectual remains the source of valid claims to knowledge, often coming from Western paradigms designed in the post-war period to offset the West’s guilt over its history of colonialism, slavery and mass murders. It is the theorist, the intellectual, the academic who can rescue the poor, the marginalised and the un/under-represented. These subalterns come into existence the moment they are theorised and articulated; their only virtue is their submission to the authoritative language of the theorist.

The epistemic privilege of the oppressed

There are subalterns, and then there are subalternists. The first is experiential, material and real; this is a life lived on the margins, on the edge and outside what constitutes the mainstream and the universal. Though subaltern historians saw them as a category of the unrepresented (both in colonial and postcolonial discourses), today they are variously called Dalits, Mahadalits, backward, adivasi, Bahujan, peasants, wage earners as well as women, sexual minorities, refugees and more.

The subalternists write about the first group, represent them, make cases for them and more often than not make careers out of them; they also make the first group be known, be engaged with and be converted to knowledge. This group variously comprises academics and intellectuals with a particular ideological slant, rights group activists, non-governmental organisations, opinion makers, eminent citizens and so on. Common sense would construe that there is an organic link between the reality of the former (subaltern) and the representation by the latter (by the subalternists). But our politically conscious intellectual habitus, which produces knowledge about people and places, does not always need the former to make claims on behalf of them.

This brings me to the question of writing. This is the world of subalternity, a hybrid space where the language of the subalternist has converted the subaltern experience into a research topic. But theoretical language is not only value-laden and designed to advance the ideas and interests of particular groups; it also mediates and even constitutes the reality while claiming to be reflecting it. The subaltern, as a category of social analysis, emerges the moment she is named and hailed as a Dalit or a peasant. The subalternist is pre-constituted as a knowing subject, and the subaltern as the problem waiting to be identified and solved.

Every government tries to do its bit (to varying degrees) in moving these groups out of deprivation, both material and social/political, and though many a time such efforts are more tokenistic and less transformative, it cannot be denied that some sort of effort is made to create a society without subalterns. The subalterns themselves, mostly, have worked in tandem with government policies, at times wholeheartedly and other times critically, and have adopted pathways that will move them out of poverty. Subalternity, on the other hand, is not something over which subalterns have any control; in fact, subalternity, as a domain of knowledge, very rarely takes into account subalterns, their life, anxieties and aspirations. Who then controls subalternity, the knowledge about subalterns, if not subalterns themselves?

Politics of representation and politics of presence

Now we enter the left-wing world of academia, activism and publishing industry, which, under normal circumstances, cannot allow subalterns to transcend their material condition and must sustain an imaginary relationship with the real-life subaltern aspirations. The subalterns’ desire to overcome subalternity will make intellectuals irrelevant; also, that would rob them of their access to fellowships and editorial memberships or foreign travel. If subalterns are allowed to speak, the edifice of subaltern knowledge will crumble. The real subaltern is the one who swears by resistance and vengeance in the narratives of subalternity (PhD dissertations, left-liberal reporting, field/study reports by most NGOs or rights groups or fact-finding teams); the aspirational, accommodating subaltern is often dismissed as one who has been co-opted by the powerful.

This leads to an interesting situation where subalternity may just be an academic problem rather than a material one, and whatever may be the source of that problem, it cannot be allowed to disappear if the supply of academic subalternity is to be guaranteed. Even if the subalterns themselves wish to advance in economic terms, we can always call this desire a false consciousness planted by global capital and their Hindutva agents in India. The only good subaltern is a voiceless subaltern, one who acknowledges intellectuals’ role in representing her and knows that her salvation lies in subaltern literature.

One academic forum of subalternity in an Indian Institute of Technology brings together one Dravidian ideologue (Periyar), who wanted to secede from India, and a Dalit icon (Ambedkar), who gave shape to the idea of a sovereign India predicated on equality, and sanctioned institutions that ensure the same. The contradiction of such an enterprise is apparent. But it never mattered if these two personalities were on the same page on issues relating to India’s future. It does not matter because as said in the beginning, it is the framework which creates a forum of resistance and, as such, cannot be subjected to scrutiny. Another intellectual forum in the same institute calls itself a bar where professors and students meet to discuss topics of contemporary relevance as they see them. Both the forums are run mostly by the same group of students, usually coming from a privileged background, and are led by Brahmin faculty members.

This brings us to the divide between the politics of representation and the politics of presence. In the former model, the subaltern does not exist as an independent group outside the narratives of the subalternists. She continues to remain silent and voiceless; her redemption is only in the writings of the saviour subalternist. The other model is agentic, where the subaltern knows what she wants; she also wishes to narrate her experience. The academic subaltern literature does not believe in the latter because it gets rid of the middlemen who add cultural capital to their academic stock.

In a meeting organised by an NGO in Bhubaneswar, some tribals challenged the environmental activists to come and live in the forests if they loved forests so much and swap forest life by giving away their city flats to tribals. That summarises the epistemic and material divide between subalternists and subalterns.