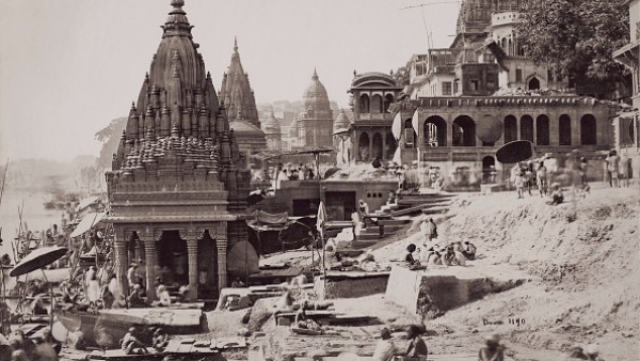 Ratneshwar Mahadev temple (left) and surrounding temples on the bank of the Ganges at what is now the Scindia Ghat in Benares (Varanasi), Uttar Pradesh, India, circa 1865. (Samuel Bourne/Hulton Archive/Getty Images)

Once the idea of an Indian nation is established, the contours of the Indian state become available. The Nehruvian and the Marxist saw Indian history as an arena of class warfare, and moulded the modern Indian state accordingly. The nationalist instead dug into the deepest sources of Indian history to establish the idea of an Indian nation. In his search, the nationalist found glimpses of the geographical unity and philosophical core of India, which made possible the immense flowering of thought in art, literature, philosophy, sciences, mathematics and metaphysics, collectively called the Indian civilisation.

However, the nationalist also found that whenever certain ideas contradicted this philosophical core, it led to the utter destruction of the Indian civilisation. He found that wherever the authority of the Indian state or Indic empires declined, it led to the complete annihilation of the Indian civilisation. His historical memory goes back to Afghanistan. This land was the seat of the Buddhist civilisation; it was the melting pot of Greek, Parthian, Turk and Indic cultures. The sublime Buddhas of the Gandhara School of Art, the majestic Buddhas of the Bamyan are the supreme gift of the Afghan people to the world. Now see what happens when the Indic empires collapsed and an alien philosophy took root. Not even one Buddhist remains in Afghanistan, and not even one Buddha statue remains unmolested.

Pakistan was part of the unified geography of India. It was the land where Panini wrote his Ashtadhyayi and Nanak preached his nirguna bhakti. They should have been Pakistan’s heroes, but see who their heroes are – the biggest mass murderers in Indian history, Mohammad Ghauri and Mohammad Ghazni. The state of Pakistan names its roads, releases postage stamps, builds monuments, and considers them to be the ancient founders of their nation. Does anything remain in Pakistan of Indic civilisation? Again, when an idea (Islamism) that contradicted the Indian philosophical core took hold in the minds of the people, the Indian civilisation was obliterated.

Tibet, the place of Mount Kailash and the source of Indus and Brahmaputra rivers, was part of the sacred geography. India and Tibet shared a civilisational bond of 2,500 years. Look what happened when China conquered Tibet – a complete annihilation of their cultural heritage, what the Dalai Lama described as the “cultural genocide” of Tibetans. Again, when an idea (Marxism) that contradicted the Indian philosophical core was imposed on the people of Tibet, the Indian civilisation collapsed.

Similarly, the limited authority of the Indian state over Kashmir led to the gradual decimation of the Indic civilisation. Indonesia, a part of the Indian civilisational matrix, has enshrined in its Constitution the worship of one and only one god! Atheism or teaching new religious philosophies is a punishable offence in Indonesia. The gradual destruction of Indic cultural heritage is happening right now in Bangladesh, and this process will continue to repeat even in the modern Indian state, unless the Indian state knows what it stands for.

To a nationalist, this is a moment of immense conceptual clarity. An Indian nationalist is a patriot because he believes that the Indian state stands for the same values that his ancestors stood for. He intuitively understands that another “tukde tukde” of the Indian state will be another nail in the coffin of the Indian civilisation. To a nationalist, India is not just a state whose territorial boundaries can be changed based on the ideological mooring of a select group of people or the latest political theories in Western academia. If India is just a piece of territory, then why fight and die for it?

The nationalist is wary of the theories from the West because it has done tremendous harm to the unity of India. He is aware that the various race theories in the West at the beginning of the twentieth century gave rise to Periyarism and Dravidianism, whose manifestation is seen in Tamil separatism and its rejection of the Indian civilisation. Similarly, the Marxist theory of revolutionary war of the proletariat to overthrow the ‘oppressive’ bourgeoisie has infected the very heart of India. It has given rise to the violent Naxal movement which aims to overthrow the democratically established government to establish a classless utopia.

In Part V, we look at how the Nehruvian and Marxist ideas of social justice and secularism are creating deep fissures in Indian society.