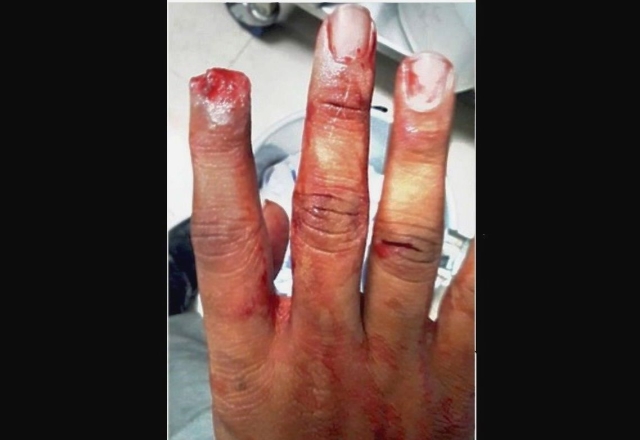 Mahesh Pandurang Dhumbre recalls a searing pain, so sharp that he went numb and closed his eyes. When he opened, he saw blood dripping from the mouth of the man standing in front of him, with whom Dhumbre was engaged in a minor scuffle.

The blood had splashed on the man’s shirt as well. Dhumbre had a fleeting thought that he might have had hit the other man hard. In the heat of the moment. The other man however didn’t seem to be in pain and coolly spat out something from his mouth.

That something was a part of Dhumbre’s index finger.

On Thursday evening, in a packed Mumbai local train, a man chewed off his fellow passenger’s finger over what seems like a minor scuffle over space.

Gory photographs of what remained of the finger have been shared on social media after newspapers published it. The sight has horrified many. What’s worse, the man allegedly showed no signs of remorse or shock at what he had done.

Dhumbre, a 34-year-old sales professional who lives in Ghansoli, narrated the events of that evening to this correspondent over the phone. The accused, 25-year-old Asif Yusuf Shaikh, is currently in police custody.

Around 6 pm on September 19, Dhumbre boarded a fast train from Dadar to Thane. He is not a regular on the route. He entered a hugely crowded first class compartment, found some space near the entrance and got busy with his phone.

Just then, a man, who looked much younger than him, entered the compartment, pushing the passengers who were standing.

An exchange of expletives between the two men followed. Dhumbre says the other man kept muttering something that he did not understand because of noise, but could make out it was directed at him. Again, they two got into a spat.

The train had reached Kurla by then and, before Thane, it would next stop only at Ghatkopar.

Dhumbre says the man held the collar of his shirt, so tight that two buttons came off. In response, Dhumbre held him by his neck.

The man shifted his face and grabbed a finger by the mouth, and did not leave it until he had chewed off a part of it.

“I tried hard but could not take the finger out. I could do nothing but bear the pain. I went numb,” recalls Dhumbre.

“It took me some moments to realise what had happened. I saw a part of my nail and flesh between his teeth, before he coolly spat it out of the train. He looked like a shaitaan.”

“I showed him my finger, so he could see what he had done. Instead of expressing shock, he attempted to hit me,” says Dhumbre.

When it dawned on other passengers that the man had chewed off the finger, they distanced from him.

“I could hear murmurs from the crowd that only an animal can do such a thing.”

Dhumbre recalls that the man attempted to hit him thrice, but was stopped by the crowd. The crowd now made space for him to move towards the exit, so he faced the city and not his co-passengers. The man did move towards the exit, but not before telling Dhumbre that when they both alight at Thane, he would tear Dhumbre’s stomach apart.

“Through eye contacts, everyone was telling each other that the man was scary and shouldn’t be touched,” says Dhumbre.

The train had crossed Ghatkopar. It was somewhere around Mulund when it occurred to one passenger among the stunned crowd that Dhumbre should call the police. “Just dial 182 [railway security helpline],” someone whispered softly but forcefully.

“I did, as it hit me that this man would only become bolder if he gets away. Until then, my plan was to let Thane pass and go till Dombivli, where I could get a first-aid done and catch a train for Ghansoli. I had no plans to take this to police.”

“We are educated people. We don’t want to get involved with the police,” he says.

Dhumbre says that to his surprise, the police responded well. They told him the cops would find him at Thane station outside his coach and he must not let the accused escape.

“The man did not hear my conversation with the police, but I had no way of instructing others to not let him flee. I had no option but to wait for Thane station.”

When the train stopped at Thane, the man was the first to exit. He seemed to disappear into the crowd even as Dhumbre was struggling to simultaneously find him as well as the police. He held his bleeding, mutilated finger raised. The cops reached him.

Dhumbre found the man as well, who seemed to be waiting for him near the stairs. “I walked towards him and the police rushed from behind and nabbed him. But I was confused. He could have easily rushed out of the station. Was he waiting for me? Did he want to harm me further? I don’t know,” he says.

“Maybe the CCTV footage will give some clues.”

A first information report (FIR) was registered around 10 pm at Kurla police station. The police identified the accused as Asif Yusuf Shaikh, a resident of Ghadiali Chawl in Khar (west). This detail surprised Dhumbre.

“Asif was dressed well, in jeans, a neat black shirt and sports shoes. He looked like he belongs to a well-to-do family. I was surprised that he lives in a chawl,” says Dhumbre.

A sub-inspector investigating the case, who requested not be named as he is not authorized to speak to the media, told this correspondent that Asif told the police that he bit the finger in self-defense. He also showed no signs of remorse or shock. He wasn’t found to be drunk or drugged at the time of the incident.

Asif has been booked under IPC sections 325 (punishment for voluntarily causing grievous hurt, punishable with imprisonment of up to seven years), and 504 (provoke breach of the peace, punishable with up to two years). He was produced before the magistrate on Friday and remanded to police custody till October 3.

The cop said Asif has no previous criminal record, is a college dropout (he enrolled in a BSc course but did not complete it, as per the cop) and is currently employed in a private firm on temporary basis.

The cop said the case is “unusual”.

Dhumbre, meanwhile, is taking treatment at a private hospital.

He recalls that after Asif gave his statement to the police, he was taken to the lock-up where, to everyone’s surprise, he promptly dozed off. “Even the cops were surprised at this nonchalance,” he says.

Dhumbre says his relative advised him to slap charges of attempt to murder on Asif, but he chose not to, as he got worried that the “boy’s career will be ruined forever”.