Now That It Is In Power, The Hindu-Right Must Define Itself Better 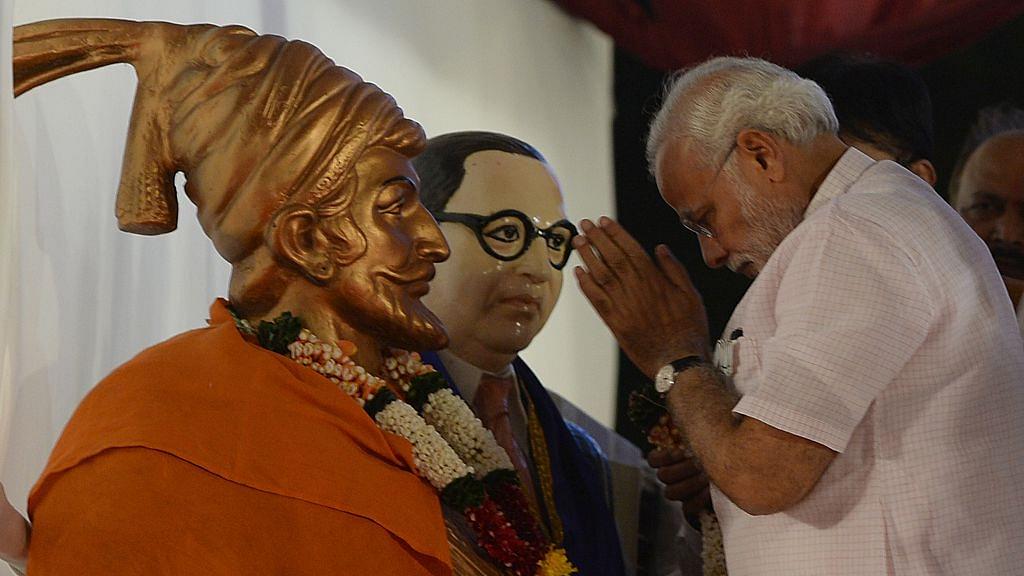 Prime Minister Narendra Modi pays his respects to Chattrapati Shivaji and the architect of India’s Constitution B R Abedkar before addressing an election rally in Mumbai. (INDRANIL MUKHERJEE/AFP/GettyImages)

The rise of the Bharatiya Janata Party (BJP) as the pre-eminent political power in India has brought the ideological discourse to the forefront of the country. It is for the first time since Independence that a government rooted in the Hindu-right framework is ruling the country, and it is the first time since millennia that India is being ruled by a dispensation, which is not anti-Hindu. In fact, the government is rooted in the larger movement of the Hindu-right. This makes it pertinent to reflect on the broad trends of the Hindu-right movement in India, and where it might be heading. The rise of the Hindu-right can to be traced to the colonial period, when India came into contact with the forces of capitalism and modernity.

It is true that the Hindu resistance to the forces of Islamic imperialism has been continuous throughout the past millennia, both on the battlefield and social-cultural realm, extending even to the literary field, and by the turn of the 18th CE had largely succeeded in blunting the assault and even rolling it back in several regions.

The lofty claims of Abrahamic monotheism of the Islam held little appeal to the Hindus, who largely ignored it or learned to tolerate its presence due to the long period of co-existence. The polemical denunciation of murti puja or polytheism by zealous sufis or the more orthodox ulema failed to make a dent into the Hindu psyche, which instead initiated a remarkable religious-literary renaissance around the same murti puja and polytheism led by the Bhakti movement and Tantra movement with their numerous poet-saints and sampradayas, like the now famous Nathsampradaya. The aggressive expansionism of Islam was stemmed by the 18th CE.

But the arrival of European powers had an entirely different impact. The establishment of the colonial rule backed by the industrial progress and Western modernity posed an entirely different challenge to the Hindu society. The intellectual movements in the increasingly industrialising Western world began to produce ideas, which started to flow into India via the new education system, emphasising the Western knowledge systems. Though these ideas were out of sync with the objective reality of the still largely agrarian-feudal India, they began to exercise tremendous influence on the educated gentry of India, especially in the field of political philosophy. The ideals of democracy, parliamentary system, republicanism and later socialism began to shape the ideological discourse in India. The contradiction of agrarian India faced with the colonial modernity not only forced open several fissures in the society but also remodeled them under the new reality.

Perhaps the biggest challenge faced by the Hindus was to justify their existence as a society. The very legitimacy of their existence came under question when seen from the Abrahamic prism of the colonial modernity. True that Islam earlier had questioned the validity of the Hindu beliefs and practices; Muslim overlords had seen Hindus as the followers of a false religion on their path to eternal hell. But now it was being asked can Hindus be considered as a religious community at all? Is there any unified religion at all to which these myriad sects and tradition can be said to be part of? The question was not out of place from the Abrahamic viewpoint as Hindus didn’t fit in the Abrahamic mould of a religious community. There were no explicit fundamentals, no ‘The Book’, no prophets or whispering angels. Instead, what they saw was millions of devas worshipped by different clans and castes in different regions. Some of these deities were exclusive to a clan or even to a family while some commanded regional devotion cutting across the caste or family lines. Others still were worshipped across the land with utmost devotion.

And this religious landscape was perceived as normal by the Hindu worldview as it wasn’t unnerved by the diversity of beliefs or felt insecure in its faith due to presence of other deities. The challenge to justify the legitimacy of their existence was as new as it was surprising to the Hindus! And what else? They had to do it within the framework of the Western knowledge system using the modern vocabulary. Various responses arose across the spectrum of the Hindu society trying to reconcile Hindu beliefs with the modern world and trying to explain the ‘scientific basis’ of these beliefs. Others tried to remodel the Hindu society on the monotheistic lines and attempted to purge the murti puja and polytheism as they too came under sway of the Abrahamic monotheismm whose ‘scientificity’, let’s remember, was once credited for the industrial and economic prowess of the West.

But the true response came from the religio-political construct, which asserted and reaffirmed the unity in diversity of the Indian pagan traditions under the umbrella of ‘Hinduism’. In the world of modern vocabulary and religious terminology derived from the Abrahamic framework, where the religious rights of a people held legitimacy only when they followed a ‘religion’, Hinduism was a construct par excellence. Unlike the liberal discourse, which sees Hinduism as something new which arose as a by-product of colonialism, it was only an attempt by the older pagan traditions anyways united by a Dharmic framework and intertwined by puranas, myths and folklore, to negotiate the changed political and intellectual landscape of the world under the Western imperial dominance.

When faced with the expansionist multi-national religions like Islam and Christianity, which see themselves as ‘world religions’ and with far greater resources at their disposal, this reaffirmation of unity helped Hindus to present a united front to resist obliteration suffered by hundreds of once powerful pagan traditions and civilisations across the world, and even the numerous tribal cultures and beliefs in India itself, most notably in the North-East. But the onset of the democratic politics and elections as the route to the state power during the colonial rule itself meant that this was not enough and much more was needed to safeguard the ancient culture and civilisation of India. It is out of this churning and the relentless assault of the Western imperialism and resurgent political Islam that “Hindutva’ was born. It has become fashionable among the liberal circles to say that Hindutva is not Hinduism. Well it must be said that otherwise under-informed liberal chatterati have got it right here. Hindutva is not Hinduism but a political response to Western imperialism and political Islam.

The construct seeks to bind various sects of Hinduism and castes within the Hindu fold to ensure the continuation of the freedom and diversity which has for so long defined this civilisation. It also promises to supersede the caste identity and differences, which have been a cause of great strife in the country, to create a post-caste Hindu society, where caste of a person will be immaterial within the Hindu fold. Various thinkers and activists within the fold of the Hindu-right have pledged their belief to these two broad aims of the Hindutva movement. But beyond it, there is no consensus within the Hindu-right about what should be the actual future trajectory.

At the upper levels of the political chain and among the educated urban India, it means something else while as we move towards the small towns and villages it is replaced by the social orthodoxy, which confuses caste-based honour killings with the defence of the ‘Hindu cause’. There is a very strong strain of bucolic arrogance and orthodoxy, which has inflicted the Hindu-right since the very beginning itself. When the Westerners defined India as other-worldly, spiritual, caste-ridden unchanging society, there were many, who responded by asserting the superiority of ‘this’ India over the materialistic West.

Although it was actually a defence of the collapsing feudal-agrarian order against the emergent modern-capitalist world, it was couched as a defence of Hinduism against the forces out to destroy the ‘Hindu way of life’. The echo of this confusion can be heard even today when in the name of answering the Marxist-missionary distortions of Hinduism and Indian history, a large number of young Hindus resort to defending everything and anything in the society and history. In the name of fighting the ‘Breaking-India’ forces, an ominous cloud of anti-intellectualism and reactionary outburst is clearly visible on the horizon.

A more sinister form of this can be seen when young-urban Hindus living in some apartment in a high-rise of a metropolis suddenly turn gau bhakts and start defending the lynching or mob-assault in the name of cow protection. Other is when any acknowledgement of systematic and still widespread caste atrocities or other such social problems is seen as ‘treacherous’ to the cause, a far cry from the days of Veer Savarkar and other stalwarts of the Hindutva movement.

The other problem has been that the vocabulary and symbols used by the Hindu-right are mostly derived from the narrow social base of the upper castes of North India. The question must be asked as to why is Prithviraj Chauhan a mascot of the Hindutva movement and why Raja Suheldev is not? Why it took a Bahujan Samaj Party government to install the statues of Uda Devi and Jhalkari Bai? Why a large number of Hindu warriors, religious saints and social reformers from the Dalit and Shudra castes are not at the centre stage of the Hindutva movement? North-Indian bias is ironical given that Hindutva movement arose in western India but maybe because it found a more receptive home in the gangetic plains, where the conflicts were far sharper since the colonial days and hence was moulded in the vocabulary and imagination of the region especially of its educated savarna castes.

But the challenge facing the Hindu-right is to rethink the broader contours of the movement and make it more systematic and inclusive. This is an urgent task as the Hindu-right becomes the main political player in the country. It can no longer pretend to be an opposition fringe of the 1960s and 1970s. What it thinks, what it does, how it perceives the world and most importantly how it perceives itself and its historical purpose will have consequences which will echo across the centuries.