Pandemic And Violence: How Safe Are Our Doctors And Healthcare Workers? 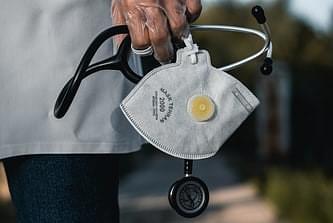 Indian Medical Association (IMA) has announced on Saturday (12 June 2021) that due to the increase in cases of violence against doctors throughout the country, it will hold a protest under the slogan "Save the Saviour" on Friday, 18 June 2020.

IMA president Dr J A Jayalal said, "Doctors serving in Covid wards have been beaten and brutally assaulted in Bihar, West Bengal, Assam, Uttar Pradesh, and Karnataka. It is responsibility of the government to ensure the safety and security of frontline workers who are working in a pandemic".

He also informed that no hospitals will be closed, and doctors can join the protest by wearing black shirts, badges or masks.

IMA has also released a state-wise list of the number of doctors who died in the second wave of the Covid-19 pandemic. Out of 719 total deaths, 111 deaths in Bihar and 109 deaths in Delhi have been mentioned in the "IMA Registry – Second Wave State Wise Doctors Martyrs" list.

Earlier, during the first wave of the Covid-19 pandemic, Dr Rajan Sharma, the then president of IMA, had said on 2 October 2020, "Our latest figures say 515 doctors treating Covid-19 patients have been martyred in the country so far".

While the total number of deaths-of-doctors due to Covid-19 is expected to be more than the figure mentioned by the IMA, the country has witnessed at least over a thousand deaths of doctor in the hands of Covid-19.

At the opening of the seventy-fourth World Health Assembly (WHA) on 24 May 2021, the World Health Organization (WHO) director-general Tedros Adhanom Ghebreyesus said that as many as 115,000 healthcare workers (HCWs) had died worldwide due to Covid-19 since the pandemic began in 2020.

Data obtained between 22 July 2020 and 15 August 2020 published in the International Journal of Infectious Diseases shows the mortality rate of HCWs due to Covid-19 across 37 countries. However, the limitation of the study was that the data related to the source of infection of virus — during work with patients or from the community — could not be provided.

Clearly, since the dawn of coronavirus – the virus has hardly spared any country from its appalling catastrophe.

There have been major cases of violence against doctors in recent times, some of which were also highlighted over the mainstream and social media.

For example, on 9 June 2021 in Assam, Dr Basanta Goswami was attacked by a mob at Majuligarh tea estate while he was returning from his evening walk.

On 8 June 2021 in West Bengal, Dr Shankar Roy was assaulted at Hoogly's Pandua Gramin hospital after a 24-year-old patient died. The locals claimed that the death was due to medical negligence and gheraoed the hospital.

On 7 June 2021 in Kerala, a mob attacked the emergency ward and assaulted the HCWs of Thrissur Medical College Hospital (MCH) after a patient died of complications.

In Manipur, healthcare workers (HCWs) at Jawaharlal Nehru Institute of Medical Sciences (JNIMS) hospital were assaulted, and the equipments of the Covid-19 ICU ward vandalized in Imphal east district. The recording of the whole incident was captured in the CCTV cameras.

On 2 June 2021, in Karnataka's Chikkamagaluru district, four culprits were arrested. The culprits had assaulted Dr Deepak when he was cycling home for lunch over the death of a 6-year-old dengue patient who was admitted to Basaveshwara Hospital.

In Assam on 1 June 2021, Dr Seuj Kumar Senapati, who was posted at Udali CCC in Hojai district, was attacked by nearly 24 relatives of the patient, including women.

These are only very few recent cases of violence against HCWs. In most of these cases, some, if not all, culprits have already been arrested. But still, similar cases of assault and vandalism continue to take place. Moreover, cases of violence and abuse against doctors, specifically by the relatives of the patients, have been occurring for a long time now.

A study published in October 2019 in the Journal of Clinical and Diagnostic Research says that in the nation, as many as 75 per cent of doctors face assault at the workplace, and 8-38 per cent of HCWs suffer physical violence at some point in their careers.

Similar studies on violence against doctors and HCWs occur almost every year; yet, nothing much has changed so far for HCWs when it comes to cases of violence and abuse at the workplace. Therefore, the demand for stringent laws for crimes against HCWs and its timely implementation for ensuring a safe environment in hospitals is justified.

However, the law — Protection of Medicare Service Persons and Medicare Service Institutions (Prevention of Violence and Damage to Property) Act which is implemented by 23 states in the country or the Epidemic Diseases (Amendment) Act, 2020 — alone cannot solve the problem.

Since the relatives of the patients commit the violence in most of the cases, there is a need for - spreading awareness on the existence of these laws, building the doctor-patient relationship, improving health infrastructure, increasing the healthcare budget, ensuring workplace safety, working on doctor/nurse to patient ratio and on other factors related to the behaviour of doctors and society.