Smart Covid: It Is Running Rings Around Us, Just Like A Guerilla Force Would 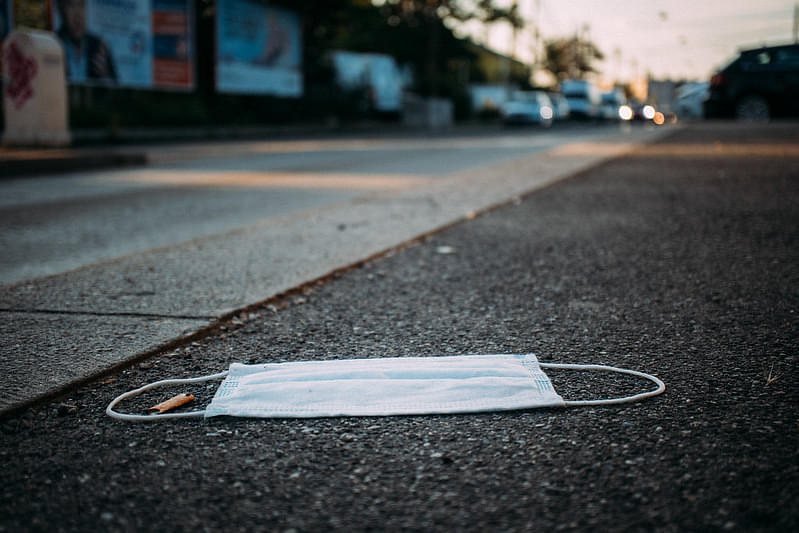 A mask lying on a street.

A few days ago, roughly a week since Maharashtra started unlocking itself after imposing stringent lockdowns that stretched for nearly six-eight weeks, I decided to conduct my own exercise to check whether people are following Covid-appropriate behaviour as the second wave tapers down.

The answer is no. We may see a third wave sooner than expected, and the Maharashtra Covid taskforce says it could happen in just another two to four weeks from now, when the second wave is far from over, even though the virus has loosened its grip.

As at the end of 16 June, Maharashtra had 139,744 active cases, but on some of the days before that, new cases were higher than recoveries. Active cases rose on some days even as the wave was waning.

My simple experiment was about two things: counting the number of people not wearing masks (or not wearing them properly) during one hour of my mid-morning walk (around 8.30-9.30 am), and observations of crowding behaviour around shops.

I counted 250 people (among an estimated 600-700 people whose paths I crossed) not wearing masks, and after that I stopped counting. My estimate is that at least another 50 were not using masks properly among those who I could not count (those travelling in autos or pillion on two-wheeler who I could not see properly).

Overall, my guesstimate is that around 40-50 per cent of people were not using masks properly on one particular day. This is not conclusive proof or valid data for scientific research, but enough to make a general point. People are not helping contain Covid.

I checked many shops, mostly kirana shops, vegetable/fruit cart pushers and street hawkers. Covid-appropriate distancing was best observed among small hawkers with one or two customers at a time, but slightly bigger kirana and veggie stores had people jostling one another almost all the time.

The reason: the bigger shops have better choices, and given the Indian propensity to pick and choose every item of tomato, potato or even bhindi only after verifying the quality of each piece, crowds tended to linger longer.

Even in departmental stores, where not more than five people are allowed in at a time, there were more people inside in many shops, not least because people will not queue up and shopkeepers do not want to lose business by enforcing a queue. Safe distancing is a near impossibility in India.

This is particularly sad, for the Maharashtra government had what I thought was a sensible unlock policy, where the degree of unlock depended on two factors: occupancy levels in oxygenated beds, and the Covid positivity rate. The higher the bed occupancy or positivity rate, the lower the opening up in each district or municipal area. The state adopted five levels of unlock.

Put simply, Uddhav Thackeray’s government was putting the onus on the people to prove themselves worthy of freedom to go about their daily lives, but mostly they are not proving him right.

Thane, which is where I currently live, was at level 2, with bed occupancy rates of 25-40 per cent and a positivity rate below 5 per cent. In this city, almost all activities are allowed, some with time restrictions and others with capacity curbs.

A few examples: parks and offices can function normally, malls, theatres and gyms can operate at 50 per cent capacity (with some caveats), all shops selling essentials and non-essentials can stay open at regular timings, and construction, agriculture and e-commerce can function as normal.

I must hasten to add that the distinction between essential and non-essential activity is difficult to police. We may think of medical supplies, fuel and food items as essential, but a pressure cooker gasket that blows is as much an essential for cooks using this vessel.

Towards the fag end of the lockdown period, Thane district saw many non-essential shops functioning in a clandestine manner, where shops kept shutters half open, so that they could be quickly downed if the police are sighted nearby. Most people and shopkeepers, purely from the point of view of economic and personal necessity, had found a way around stringent lockdowns.

But such need-based transgressions apart, the real worry now is that people have abandoned Covid-appropriate behaviour on a mass scale, and this can only mean trouble. We have a tendency to blame episodic crowds during festivals, election rallies and other functions as super-spreader events, but we tend to ignore the everyday transgressions that are regular and more frequent.

If the Kumbh, Ramzan crowds and election rallies were super-spreader (they probably were), we can say the same about the risks now being courted all over Europe and Latin America, where large crowds are gathering in stadiums to watch the French Open or the ongoing Euro 2020 and Copa America football cups.

We were quick to condemn our IPL, where there were no crowded stadiums but only players and support staff staying in “bubbles”, but Covid still struck the game. The world simply does not like being contained in safe spaces.

The question is what do we do now?

One obvious answer is to accelerate the vaccination programme, but since this is only a matter of time, we shall not over-emphasise this. The government is already acting on this priority.

The real issue is the assumption that Covid is some kind of episodic event, which will go sooner than later. We should know, after our failure to anticipate the second wave and its intensity, that Covid is not going away anytime soon. Nor is vaccination the complete answer.

The United Kingdom, which has one of the fastest rollout plans, has given one dose of the vaccine to 42 million people and another 21 million will get it by July. The second doses are being accelerated. But the UK is already beginning to see the emergence of the third wave. And Seychelles, the most vaccinated country in the world, began experiencing a new Covid wave in May.

India, which has vaccinated the greatest number of people fully (after China and the US, with nearly 48 million receiving both doses by 16 June), has a long way to go since barely 5 per cent of the eligible population has received both doses.

Coverage for the first dose is probably close to a quarter of the eligible population. The moral: vaccine or no vaccine, Covid is finding a way to get to us. The sooner we vaccinate the better, but even if we do that, we can’t presume that the danger has passed.

This implies that we have to do two things:

One, impose stricter fines for non-masking or wrong masking, and drill it through continuous messaging that Covid is going to be with us for years, and not just months. This mindset change is vital to ensure that the vaccination advantage is double-walled with adequate social awareness of the risks too.

Two, shops and places where people congregate for necessities should be open for longer hours even during curfews, so that people don’t rush to stock up and sacrifice safety protocols. Keeping shops open longer, and fines for crowding should become the norm. Restricting shop timings will worsen Covid behaviours in a country driven by the shortage psychosis.

A corollary: home deliveries should become the norm rather than the exception, and not only for e-commerce players. Many restaurants and shops have indeed embraced the need for home deliveries during lockdowns, but this idea needs to go mainstream.

The biggest lesson people need to learn is that the virus has learnt to use guerilla tactics and hit at our weak spots. It is mutating faster than ever, even while our behaviours are taking too long to change. The Delta variant. which is said to be behind India’s massive second wave, has already mutated into the Delta Plus variant, and more may be on the way. Our vaccines and covid-safety behaviours have to mutate as fast to cope.

To beat the virus, we have to be smarter than it.