The Civilisational Importance Of Draupadi Murmu Becoming India's Next President 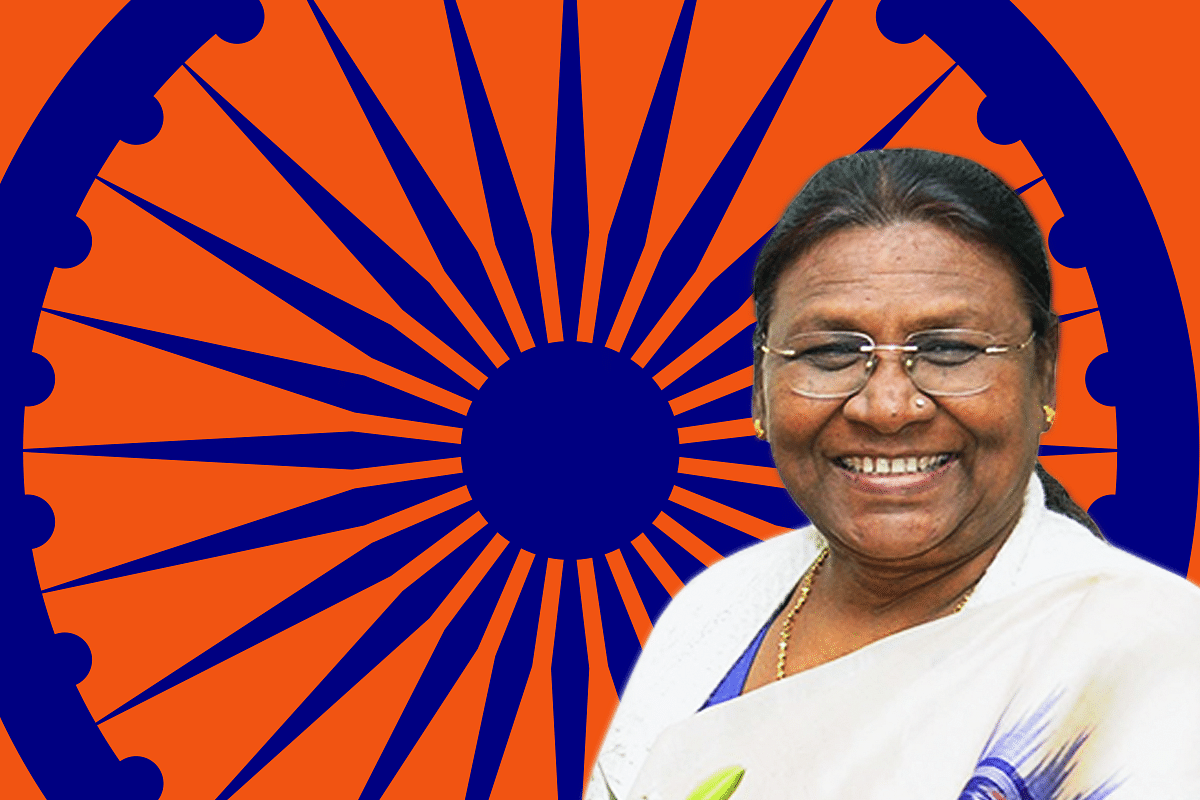 Tradition has a beautiful story about Jagannath of Puri.

King Indradyumna of Utkal (part of modern Odisha) wanted to build the most beautiful temple for Vishnu. His chosen form of the deity was as the blue-coloured, cowherd boy, Sri Krishna.

It was rumoured that the most charming, exquisite, sacred idol of Vishnu, as Nilamadhava, existed in a sacred, secret place of a tribal community. It was a dearly guarded secret for the community, which only its leader, Viswavasu, knew.

The king, through a very intelligent young man, discovered the place but at once a storm made the Lord disappear. Angry, the king jailed Viswavasu.

But the king himself was depressed. In his dream, he heard a divine voice telling him that the Lord had appeared in the form of Daaru tree trunk, floating in the ocean and he could make the divine idols from that tree.

Next day, sure enough, such a trunk was seen floating. But all the king's elephants and all the king's men could not pull it to the shore. Again, the king was depressed and again he heard the divine voice, telling him that he could not accomplish it with his army and power. He had to free the tribal chieftain Vishwavasu and they both should together pull the tree trunk to the shore.

Indradyumna understood his great mistake, went to Vishwavasu and asked his forgiveness and released him. Then he told him of the dream.

Indradyumna and Vishwavasu both walked together to the sea shore. The tree trunk with the sacred conch symbol naturally formed on it was floating. They tied the ropes and the tree trunk that ten elephants could not move simply came towards the shore when these two devotees pulled.

And it was from this wood that the original sacred idols of Krishna, Balarama and Subhadra were made.

Thus, Odisha is adorned by the exquisite temple of Puri Jagannath, which is the place where the Divine emphasised the importance of forest communities.

Throughout its civilisation, Hindu Dharma has emphasised equal empathy for all communities rather than focussing on arranging them on a 'scale of civilisation'.

So Arjuna getting the knowledge of weapons through Shiva who manifests as a tribal chieftain, Subrahmanya marrying the daughter of a tribal chieftain etc., are part and parcel of the civilisational narrative of India.

Unfortunately, this has been ignore by not just Western ‘scholars’ studying India but by Indian students of history and culture themselves, through indoctrinated Western concepts. Hence, they see Hindu culture and society as one that 'marginalises forest dwelling tribal communities' whereas in reality the dis-empowering of forest-dwelling tribal communities came with the colonial impoverishment of India.

Later, this abusive approach to tribal communities was followed by most Indian governments in the post-independent era. Even well-meaning approaches followed the post-colonial Western-centric development as their goals.

What colonialism and Nehruvianism created, Hindu Dharma was blamed for.

Here, let us pause and remember another historical coincidence.

The Santhals never had any major problem with the precolonial rulers of India. It was the British rule that ruthlessly exploited them. As a result, the Santhal rebellion that happened in 1855 happened to be led by Sidhu Murmu and Kanu Murmu.

It is in this context that one has to see the BJP-led NDA announcing Draupadi Murmu as its Presidential candidate. This is not tokenism. This is the new India and age-old Hindustan making a civilisational statement of Dharma that is Sanatana.

The Santhal rebellion against colonialism was one of the bravest yet largely-unknown chapters in the history of Hindu Nation. Puri Jagannath of Odisha, from where Draupadi Murmu comes from, provides the sacred model for the integration of forest-dwelling and non-forest-dwelling communities.

That today Draupadi Murmu stands against the social stagnation created by Nehruvian system of fragmented identity politics and as the symbol of a united, rejuvenated India, that is Bharat, is immensely poetic and also a majestic statement of India’s inner vitality.

This is aimed at removing a century-and-a-half-old narrative of the 'tribal non-tribal' divide. This is the display of the traditional Hindu ethos of inclusive and harmonious national development which is part and parcel of Hindutva.

It is what the old tradition of Puri Jagannath tells us—that for building the temple of national development and to make it a model for the whole world, we need the values and guidance of traditional tribal communities.