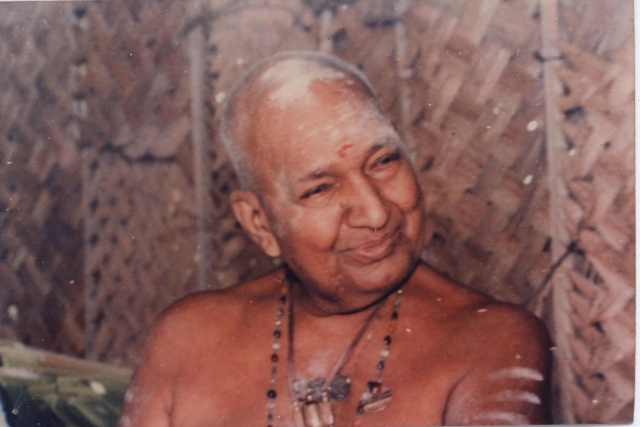 Thiru Muruga Kirupanandha Variyar Swamigal is a name known to every Hindu child of Tamil Nadu who grew up in the decades between 1950s and 1980s.

At a time when the pseudo-rationalist Dravidian movement was trying to appropriate all the cultural treasures of Tamil with their shallow rhetorical flourish, Variyar Swamigal answered them in his own characteristic, gentle, but firm and scholarly way.

His means of reaching the people was through upanyasam and kathakalakshebam - narrating the epics, Puranas and stories.

He could explain the most profound of the Shaiva Siddhanta concepts in a way that both a child and a scholar could understand.

Many could imitate the characteristic outer form in which he conducted his 'telling' of religious wisdom; but, to reproduce what he conducted through that form, it would take a lifetime and perhaps the accumulative good karma of previous birth.

He also had the good blessing of learning Shaiva Siddhanta from Pamban Swamigal, a saint who is said to have had a direct vision of Murugan.

Swami was a great scholar of Thirupukazh - the melodius mystic hymns poured forth by Arunagirinathar Swami.

Arunagirinathar himself was a genius phenomenon, unparalleled in the religious history of humanity.

Variyar Swamigal edited and published a magazine, Thirupukazh-amritham (nectar of Thirupukazh) - which brought forth not only the greatness of Thirupukazh but also of other works of classical Tamil religious literature.

The series on Sangham literature, Thirumurugattrupadai, by another great Tamil scholar Ki.Vaa. Jaganathan was a masterpiece, bringing out the integral way in which the literary aesthetics and spiritual science were intertwined.

Variyar Swami also wrote commentaries on important works of Arunagirinathar like Kantharalankaram and Kanthar Anuboothi. His prose work on Periyapuranam became so famous that it was made into the famous movie Thiruvarut Selvar.

Variyar Swamigal himself had appeared in a few movies to counter the Dravidianist propaganda of pseudo-rationalism and to nurture spirituality.

He also wrote a lot of books for children. He could reach out to the minds of the children without diluting the spiritual essence of great literature.

While in the popular minds, the Puranic story of Ganesha getting the elephant head is associated with a supposed rivalry between Parvati and Shiva, Variyar Swamigal, in his book on Ganesha, which he wrote for children, brought out the multiple Puranic dimensions of Ganesha.

He pointed out how out of two components of Pranava, painted in the hall of the mystic Mantra paintings at Kailasha, Shiva and Parvati made Ganesha manifest as the very embodiment of Pranava itself. This the primordial divine couple did through mere gazing, he explained.

Such a deeply spiritual concept was taken to children in simple, sweet language.

His work on Kanthapuranam is yet another masterpiece which brought out the intensity, inner truth and beauty of Puranic language.

He would never openly attack anyone. He was too soft, gentle and spiritually mature for that. Yet, while speaking about the inevitability of death, he stated that even American doctors could not stop the coming of death - the context being the death of C.N.Annadurai.

Though the statement was made almost a year after the death of Annadurai, yet the storm-troopers of DMK went and attacked Varriyar and even the sacred idol of Muruga he always carried. Later, the attackers realised their sin and approached Varriyar and begged him to forgive them, lest they suffer divine punishment.

The ever compassionate Variyar Swamigal blessed them and gave them vibhuti.

Though he was a staunch Shaiva Siddhanti, he would not criticise other Darshanas in a cheap manner.

For example, when he had to talk about Shankara's Advaita, he would take extreme care not to utter a single word of disrespect towards the great Advaitic acharya and would avoid calling his system wrong directly.

At the same time, the Shankara Advaita schools acharyas also respected him greatly.

It is said that when Sri Chandrasekarendra Saraswati was about to meet Variyar Swamigal, he forbade the latter to prostrate before him. Because of Shaiva deeksha, Variyar would be wearing a linga and that could have touched the ground if Swamigal prostrated before Kanchi Shankaracharya.

Variyar Swami also campaigned against animal sacrifice in Tamil Nadu temples. Without forcing or without the help of legislation, merely by the sheer force of his beautiful talks, spiritual strength and convincing arguments, he made people voluntarily give up animal sacrifices.

His love and pride for Tamil never forced him to hate any other language. More importantly, he emphasised the importance of Sanskrit in our culture and spiritual traditions.

In a popular Tamil magazine, a person had asked him the following: 'Shiva is a Tamil God and yet, all the mantras for daily anushtanas of those who got Shiva Deeksha are in Sanskrit'. This person wanted Varriyar Swamigal to explain this. Swamigal replied:

Variyar Swamigal was concerned about social issues as well. He advocated women education and always asked the husbands to treat their wives with respect. He was also against untouchability and other social evils. He worked for Hindu unity and was an honorary editor of Hindu Mithran, the official magazine of Vishwa Hindu Parishad. He was very much impressed with the Ekatmata Yatra.

Today, the same separatist forces, against which Variyar Swamigal won the battle with his spiritual strength and genius of his upanyasas, have raised their ugly heads again. The need of the hour is to remember him and by getting inspired through his sacred memory, continue the battle so that Dharma shall win the war and reclaim Tamil Nadu as the land of Vedas and Dharma.