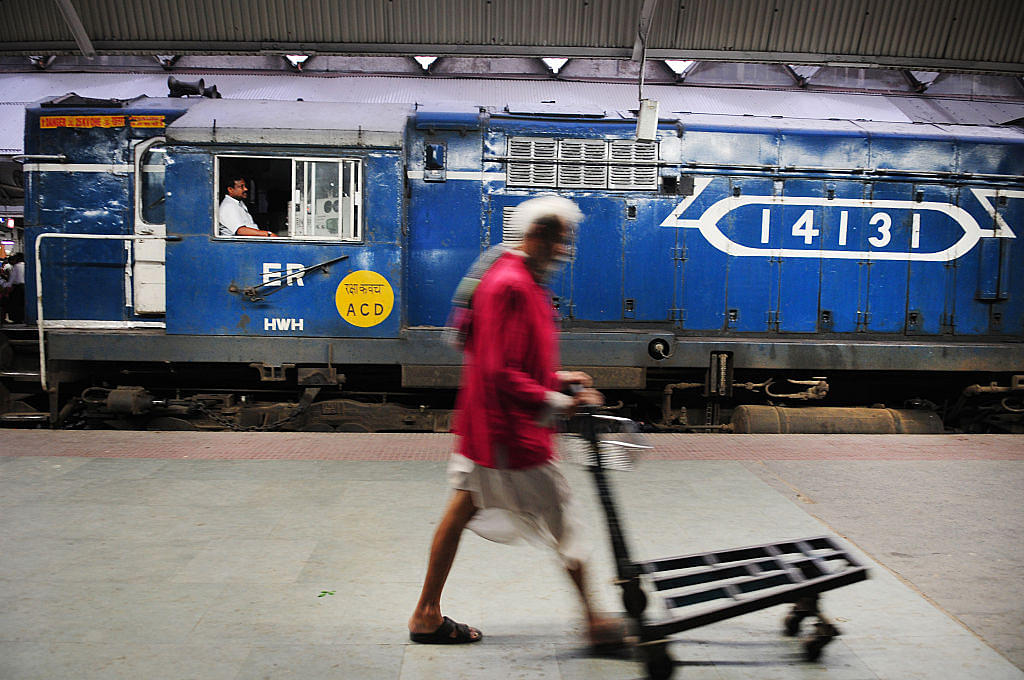 A porter walking in front of a diesel rail engine at Howrah Station on February 26, 2015 in Howrah, India. (Indranil Bhoumik/Mint via Getty Images)

The Indian Railways’ monumental station redevelopment programme envisages a transformation of our dilapidated railway stations so that they can serve as multi modal transit hub. By sporting an architecture that will reflect the culture and character of the city, the stations will enhance passenger comfort and experience by leveraging the real estate potential of the land and air space in and around them. The stations will be self financing and would generate revenue for the railway.

In an interview to Swarajya, Hanish Yadav, officer on special duty (OSD) to the Union Minister of Railways Suresh Prabhu, discusses the status of the projects and the various challenges that have to be overcome to reach this milestone in urban development.

Eight railway stations were identified for redevelopment to begin with - Anand Vihar, Bijwasan, Chandigarh, Habibgunj, Shivaji Nagar, Surat, Mohali and Gandhinagar. So far, we know that work on Habibgunj is underway. What is the status of the other seven projects?

We are trying to develop at least 100 stations actively as of now, not just eight. The stations that you have mentioned are all being developed by IRSDC (Indian Railway Stations Development Corporation), but there are six to seven other ways through which we are trying to develop stations. This is probably the largest transit oriented development across the world with a total cost estimate of Rs 1 lakh crore with a target to develop about 400 stations. IRSDC is responsible for the development of 12 stations, starting with the eight that have been named. Out of that, work on Habibgunj is in progress. Bids have been called for the Anand Vihar and Bijwasan project, and are in the process of being finalised. We should see the contracts for those stations awarded in the next four to six weeks. Bids for the Surat project are also in the finalisation stage, and we would soon see the contract being awarded. The rest of them have not as progressed in terms of the whole bid management process.

Designs of Shivaji Nagar, Chandigarh projects, etc, are still being finalised. But, this is only one way for the development of stations. There are 23 other stations that are being redeveloped by zonal railways through the Indian Challenge or modified Swiss Challenge (wherein a public authority receives an unsolicited bid for a project and invites third parties to match or exceed it) on a public private partnership (PPP) basis. For those 23 stations we received all the bids in and around January. Out of those, the first set of stations, which is Jammu and Kozhikode, have got bidders so the process over there will start.

Besides that, we have given 10 stations to NDCC to develop. Moreover, 18 suburban stations will be developed by our own public sector undertaking, Mumbai Railway Bus Corporation. State governments are also developing stations. For example, we have signed a contract with the government of Odisha to develop stations in Bhubaneswar. There are some stations where we are putting in our own money to develop the projects all of which are public private partnership (PPP)-based. We have sanctioned about 100 crore for works on Varanasi and Ayodhya stations. So, it's just not the size but also the impact of this programme which is massive.

This was approximately for 100 stations. What about the 400 others outlined in the plan?

The 100 projects are actively being pursued as of now. We told the cabinet that we want to execute 400 station projects through a particular method. Out of the 400, we have completed detailed feasibility reports for 50 stations, out of which we went to the market with 23. The real estate market is also not at its best. Thus, we wanted to test the waters first to see how the market is responding because I don't think there is enough capacity to even start absorbing so much of work with only five to six developers. If we put out 100 stations for bidding they will not be able to match up to the requirements. Hence, we restricted it to 23 stations. We have shortlisted about 35 stations for the next phase and this will be followed by adding another 150 by the end of the year.

How do you see the synergy between your station redevelopment plan and the smart city initiative?

Synergy is good. We signed a Memorandum of Understanding with the Ministry of Urban Development. It was agreed that stations will be developed in tandem with the smart city project. Some of the first stations that have been entrusted with the NDCC are those 10 which are also part of the sanctioned smart cities project.

What are the challenges you expect to face in a project as large as this?

There are many challenges. The biggest challenge is that the real estate market has not been upbeat for a variety of reasons. Look at Delhi, for instance. Real estate prices have not risen in various parts of the country. So, the mood is somber, that's the first one. Real estate players are also not in the best of their financial health, which prevents them from expanding at growth they want to. Sustaining their interest is becoming a problem. Those two are main issues from the market side.

I think, going forward, the challenge which we expect to face is the time being taken for bidders to obtain NOCs and approvals from state governments and municipalities. Bidders, whose money is locked in projects, would want to get the approvals faster, but the government works at its own pace. Also, since this is a Railways initiative, the state government has no skin in the game. However, we are trying to partner with states as far as possible, so that they can also become stakeholders in the development and give approvals as and when required.

The final challenge would surface when the construction starts, as these are all brown field projects, where the structure would need to be demolished or renovated. Since the railway lines operate 24/7, we have to carry on construction without disturbing the passenger flow, and we have such massive foot falls. This would require very good detailing and planning to make them work and to meet deadlines.

Is there an overall plan to deal with operational challenges that may come with brown field projects?

Yes, we follow a method which involves very detailed planning so we know when to block trains, when to divert the stations and platforms.

What has been the experience about working on a PPP-based development?

We have just started, and have awarded only the Habibgunj station project. We got a response and we got a private player, which is now operating the station for us. It has been officially handed over.

Is it along the lines of how the airports and most metro cities are now?

It’s very different. Airports are much more complex structures, for instance the Delhi airport. Airport developer GMR, the Airport Authority and a sub-equity are in charge of airport development, the reason why we could only build five to six airports. We are trying to put a model that could scale up to 100 to 120 stations in one go.

What has been the funding model of this project? Will it be financed by project revenues or station facility revenues or a mix of both?

The station development concept is based on a certain cost along with the provision of a barren piece of land. So, the revenues that come from the land actually start financing the cost of construction of stations. The revenues from stations are usually less than 10 per cent of the overall cost of the project. So, they are not the fundamental part. The fundamental revenue source is actually from the commercial exploitation of the land that we give along with the station.

In most cases you have best practices that are available around the world. Have you adopted any best practice for this particular project?

We have been in touch with majority of players. SNCF, French National Railway Company, has been developing designs for us in Ludhiana. We have looked at how some of the stations in China and Germany have been developed, after which we have adopted the methodology that we are following now.

How receptive have the state governments been, and what's the cooperation level with them?

It depends from state to state. For example, Odisha extended very active cooperation over the Bhubaneswar project, Maharashtra and Gujarat have shown a lot of enthusiasm. For both, Gandhinagar and Surat, special purpose vehicles were formed for these companies involved in the project in association with the government. Thus, the Surat’s local municipality along with the Indian Railway Stations Development Corporation (IRSDC) have formed a joint venture company to manage the station. Similarly, in Gujarat, there is a 50-50 per cent partnership between the IRSDC and the state government to fund that station. I think where people start to see the benefits, the interest is increasingly growing.

Are they any laggards that you would like to highlight?

The states are going to benefit from these projects. We would be happy to let any state that has evinced that kind of interest to take control of the stations.

Rishabh is a liberal inflitrating into the conservative scene. His interests are the cultures and politics of India and the Middle East. He tweets @rishabhrekhade