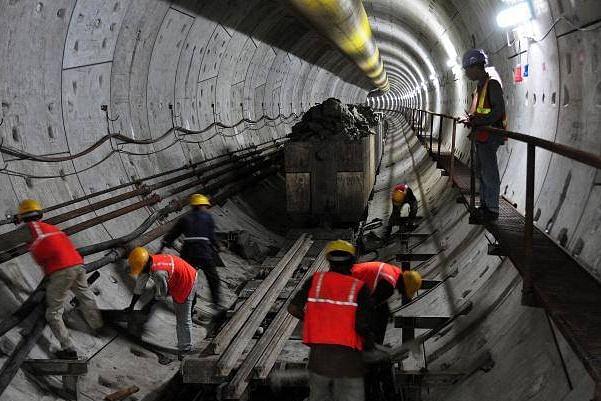 It was Rachna who was the first to embark on the ‘ground-breaking’ journey from the western bank of the Hooghly river on 18 April 2017.

With that journey under the river, Rachna scripted history and nothing short of an engineering marvel in this part of the world. Prerna also completed the under-river journey in the opposite direction from the eastern to the western side of the Hooghly on 21 June 2017.

Rachna and Prerna were two German-made tunnel boring machines (TBMs) that were shipped to India in parts and assembled underground in two huge shafts that had been dug on the two sides of the river.

The twin tunnels that Rachna and Prerna dug under the Hooghly are a critical part of the 16.6 kilometer-long East-West Metro that will connect Kolkata’s IT hub of Sector V in Salt Lake to Howrah on the other side of the river.

The metro line from Sector V runs on elevated tracks for 5.8 km covering five stations before going underground and travelling 10.8 km till Howrah. The under-river stretch measures 520 metres and lies at a depth of 13 metres from the riverbed.

The highly specialised TBMs that used the latest ‘earth pressure balance’ technology were manufactured by reputed German engineering firm Herrenknecht GmBH at its plant at Schwanau in Baden-Wurttemberg in Germany.

Transtonnelstroy-Afcons, a joint venture between Russian engineering giant Transtonnelstroy and Afcons (a Rs 8,750 crore firm that’s part of the Shapoorji Pallonji group) had bagged the Rs 938 crore contract for constructing a part of the underground stretch, including that under the Hooghly in 2010.

But tunnelling work could not start due to opposition from occupants of buildings and street vendors occupying sites where the Metro stations and other facilities were to come up. Ultimately, it was decided to realign the route to avoid relocating 80 families and displacing more than 100 street vendors.

The realignment was approved by the Indian Railways and Japan International Cooperation Agency (JICA), which is funding 48.5 per cent of the project cost.

Clearance from the Archaeological Survey of India (ASI) — it had to greenlight the tunnelling since many important heritage structures were in the vicinity of the construction sites — also took considerable time to come.

Ultimately, digging the huge shafts to lower the two TBMs, which had been lying idle at Howrah Maidan for over five years from October 2011, started at Howrah and on the eastern side of the Hooghly in March 2017.

“Right from the start, we had to battle many issues. One of the toughest was working out the realignment and getting it approved by the Railway Ministry. There were also major concerns about tunnelling under Brabourne Road (on the eastern bank) as the tunnel would pass within 100 metres of heritage structures and also many old and dilapidated buildings. Occupants of some of these buildings had to be shifted out temporarily and we had to engage experts to reinforce the weak buildings to prevent them from collapsing. We engaged experts from IIT Kharagpur,” said a senior officer of the Kolkata Metro Rail Corporation (KMRC), which has been set up for the East-West Metro project.

Tunnelling under the river was a very high-risk exercise since the TBMs had to bore through soft clay. “While the TBMs bored under the riverbed, a dense concrete layer was simultaneously installed on the walls of the twin tunnels to seal them and prevent water seepage,” said the KMRC officer.

“Each concrete liner segment was fitted with an imported neoprene main gasket and hydrophilic auxiliary gasket. The hydrophilic gasket expands when it comes into contact with water and thus seals off the tunnel. It acts as an extra protective layer,” explained the officer.

More than 250 workers were engaged in two shifts for tunneling under the riverbed. Another challenge that the engineers faced was that the two TBMs could not work parallel to each other because of the soft clay.

While tunnelling under the river, ensuring the safety of the engineers and workmen was an issue of major concern.

“The pressure under the river is three times the atmospheric pressure. It is extremely hot and humid inside the tunnel. So we had to install heavy-duty equipment to depressurize the tunnel and ensure adequate and continuous air circulation,” said a spokesperson of Transtonnelstroy-Afcons.

The upper layer of the riverbed is organic clay and sandy silt forms the lower layer. “We had to tunnel through the sandy silt and that was very risky,” said the spokesperson.

The two tunnels are 16.1 metres apart and 5.5 metres in diameter. The metro will travel at a speed of 80 km per hour through the underwater tunnels and whiz through this section in a minute.

After the two TBMs — Rachna’s technical number was S639 and Prerna’s was S640 — completed tunnelling, they lay below Curzon Park in Esplanade for over two years until end-June 2019. The reason: another bureaucratic delay over handing over land to KMRC for digging the huge shafts for bringing the two TBMs to the surface.

As they lay below Curzon Park, the backup parts and gantries of the two TBMs, each around 90 metres long, were disassembled and wheeled back through the tunnels they had bored to Howrah station, from where they were extracted bit by bit.

The main machines lay below Curzon Park until the shafts were dug in March-April 2019. A 160-tonne capacity crane was used to lift out the two TBMs in bits and parts, and the whole exercise concluded on 3 July 2019.

After a farewell ceremony attended by engineers, officers and workmen of KMRC and Transtonnelstroy-Afcons on 22 July 2019, the disassembled TBMs loaded onto huge trailer trucks to journey to Afcons’ equipment yard at Nagpur.

The Story Of Rachna And Prerna

Rachna and Prerna are actually two young women who live in Sodepur, a northern suburb of Kolkata, with their mother.

Their father, Bimal Saha, was billing manager with Afcons. He was very popular amongst his colleagues and known for his sincerity, uprightness and hard work.

Saha met with a fatal accident while driving to work on 25 February 2016. That was when the two TBMs were lying idle at Howrah Maidan. Saha would often rue their fate, and complain about keeping the machines idle for such a long time, to his seniors.

Saha’s colleagues say he was very keen that the deadlocks be resolved and the two TBMs start tunneling.

TBMs, like ships, are christened before they are launched. And they are usually given feminine names in the belief that it would bring good luck.

Once all issues were resolved and the TBMs were to start tunnelling, senior executives of Transtonnelstroy-Afcons decided to name the machines.

“We discussed this amongst ourselves and consulted our engineers and workers. Everyone felt it would be appropriate if the two TBMs are named after Saha’s two daughters. That would be a fitting tribute to Saha,” said a senior engineer of the joint venture.

This is how the two TBMs were named after Saha’s two daughters.

The Other Tunnel Under Hooghly

However, this is not the first tunnel under the river. Nearly nine decades ago, another tunnel, albeit a smaller one, was dug under the river to carry power cables from Kolkata to Howrah.

Howrah was witnessing phenomenal industrial growth from the early twentieth century with a large number of jute mills and engineering units coming up there. The British realised that power would have to be transferred from the generating stations in Kolkata to Howrah on the other side of the river.

In March 1930, hardy workmen hired from Punjab started digging vertical shafts on the west bank of the Hooghly adjacent to the Botanical Gardens and at Metiabruz on the eastern side of the river.

After four months of vertical digging to reach 33.5 metres below ground level, the tunnel diggers started boring their way horizontally with shovels and other implements under the supervision of British engineers.

The tunnel, designed by boiler specialist John Lochrance with Sir Harley Hugh Dalrymple as project chief was completed in July 1931.

This tunnel, situated a little downstream from the twin metro rail tunnels, exists to this day and engineers and workmen of the Calcutta Electric Supply Corporation (CESC) take it everyday to inspect the cables passing through it.

The British had, by then, mastered tunnelling technology; the London Tube was constructed 67 years before the CESC tunnel.

While the CESC tunnel took 17 months to build, the Howrah Bridge took over six years to construct and the Vidyasagar Setu in recent times took over 13 years.

This piece was first published on indiainfrahub.com and is republished here with permission