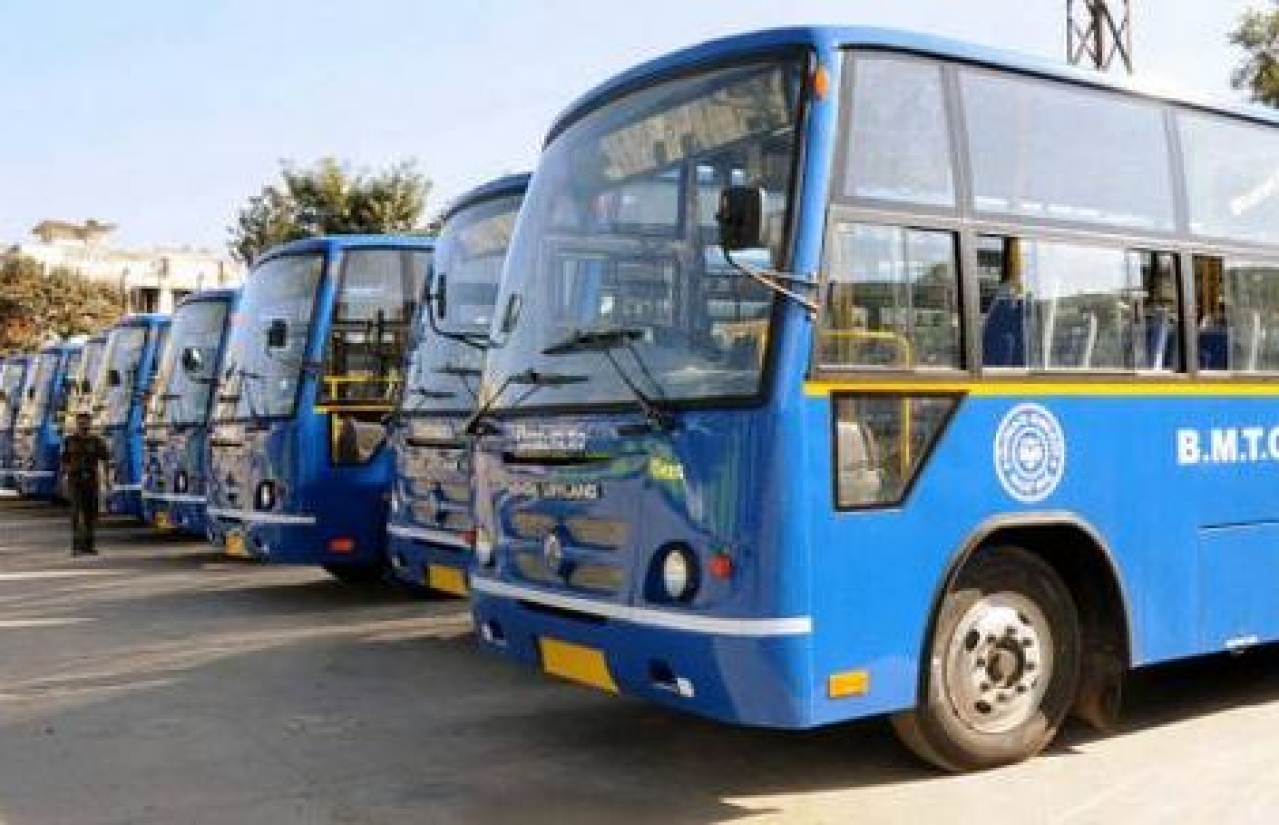 BMTC buses parked in a depot. Image courtesy of twitter.com/IChangeMyCity.

The Delhi government’s free travel plan for women was an initiative taken to address the issue of security for women commuters.  As already pointed out by many transport and safety experts, it is not clear how making transit free for women will increase their safety. The other genuine criticism of the free plan is regarding the cost of giving free rides that will hurt the balance sheet of transit companies. While this is a genuine concern, the suggested plan should trigger a debate on two interconnected issues that need to be addressed urgently in the wake of growing traffic congestion and pollution in the cities.

First is the issue of disproportionate resource allocation of the transport infrastructure towards the rich, especially in the urban context. Second, on the efficiency and profitability of the state-run public transit companies like Delhi Transport Corporation (DTC), Bangalore Mahanagar Transport Corporation (BMTC), and Brihanmumbai Electricity Supply and Transport (BEST), etc.

Who will pay for the free rides?

It is well understood that roads are the costliest transport infrastructure in a city and the primary use of this infrastructure is for cars, majority of which are owned by the rich (top 5 per cent). On the other hand, the remaining infrastructure like footpaths and cycling lanes hardly exist and public transit facilities are poor. From this view, the free plan (for public transport) does make the right noises about balancing the resources.

A key question that needs to be answered though is this: where will the money come from? But here is a counter question: where did the money come from when we built eight-lane roads inside the city, constructed numerous flyovers and parking lots which are primarily being used by car owners? Why are the same questions not being asked when millions of cars are parked for free in the busy and valuable city real estate every day?

Many studies have indicated that the city of Delhi alone loses thousands of crores of rupees in revenue owing to illegal and free car parking. This number is possibly even bigger than the combined current revenue of DTC and BMTC. However, we never hear the “freebie” argument associated with this. Likewise, we never debate on who will pay for the impact of pollution that is caused by these cars (especially the diesel cars) on the common man, majority of them being poor. While nobody grudges good road infrastructure, there is a visible gap in providing reliable and safe public transport which is almost the only means of transport for the poor.

The proportion of the expense that the poor incurs in transport relative to her total income is as high as 20 percent . And even then, the public mode of transport is unreliable, unsafe and inconvenient. At the least we can make it cheaper (if/and not free).

But, the question we asked earlier, still remains, “Where will the money come from?” The answer really is that the poor has indirectly already paid when we made roads that are primarily used by cars. Even if we keep the resource balancing argument aside, financing easy mobility for the poor will lead to various economic benefits for all the sections of the society. So in a way the cheap transport plan may be a win-win situation for all in the longer run.

But what about transit companies ?

The other concern about reducing ticket prices is premised on the profitability of the transit companies. The term profitability is referred generally for a company with a product, and a management that builds and evolves the product. For bus-based transit agencies like DTC and BMTC, the product is the overall riding experience of the passengers in a bus. In the current world of Uber and Ola, it is no secret that most state-run transit agencies are of extremely poor quality.

Contrast the experience of a DTC bus user with a Uber cab user. A bus rider across the country still waits for buses without knowing when will it arrive. The time tables are hardly followed. The bus stops/shelters are of poor quality and are even encroached by cars! The buses breakdown frequently. The routes and their coverage is not updated and there is hardly any integration with other means of transport that collectively makes the ‘bus- product' highly sub-optimal. No wonder, the only people who ride these buses are those with no other choice — mostly the poor. The rich would not prefer a DTC bus even when offered a free ride.

A natural path towards increasing revenue is therefore increasing the quality of the product rather than worrying about the ticket price of the poorest of the passengers. This is not to say that it should be free, but compared to the developed world with a robust public transit and a far superior quality, the ticket prices in India are already on a higher side.

Consider a per capita income of $50,000 to the ticket price of $2 ratio of 25,000 people in cities like New York, Minneapolis and San Francisco known for their efficient public transit. The same for an Indian city is 10,000 people, assuming 1 lakh per annum income and a ticket price of Rs 10. Higher ratio indicates cheaper transit. Again compare the quality of the service, and the rationale for a cheaper transport strengthens even at current prices.

Rather than focussing on the ticket prices, the governments of the day should focus on making the product better. The public transit corporations should focus on passenger experience just like private companies such as Uber and Ola do. Secondly, the corporations should optimise the operations. Both the above objectives require technical expertise and therefore require an involvement of public transit professionals and researchers from industry in the day-to-day operations of the transit agencies.

Companies like Uber, Ola and transit agencies in Hong Kong, Paris etc., are run by techies and professionals unlike the Indian public transit companies, which are run by civil servants, many of whom consider their work as a punishment posting.

In this aspect, the Modi government should facilitate a lateral entry of professionals at the senior level and forge a complementary partnership between technologists and administrators. With the right reforms and professional management there is no reason why public transit companies cannot be profitable.

India is suffering from extreme congestion and pollution in her cities. The biggest brunt of these two menaces is borne by the poor. Our cities are getting urbanised rapidly and the quality of life for the poor can be substantially improved if we provide everybody clean air and cheap and convenient transportation. It is time we make bus-based public transit in all cities our priority.

Pravesh Biyani is an assistant professor at IIIT Delhi. He works on systems and optimisation of urban transportation. He tweets at @pravesh.