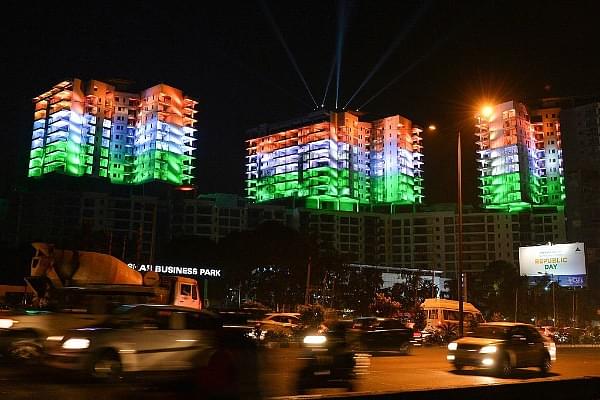 Commercialisation must not be seen as something intrinsically vulgar. It has its role to play in the story of a city. (MANJUNATH KIRAN/AFP/GettyImages)

Bengaluru’s Resident Welfare Associations (RWAs) and the bureaucrats, who govern the megapolis, have a simple relationship when it comes to changes in the city’s zoning regulations: that of the ‘proposer’ and ‘disposer’.

Zoning reforms would usually involve a shift towards some form of mixed land use, allowing commercial development on wide roads in residential areas of the city and more. Most of these measures would benefit the city as a whole by bringing down commute times, increase municipal revenues as well as housing options available to the city’s professionals, among a host of many other benefits. The RWAs, however, oppose the idea of mixed zoning for one major reason – ‘Not In My Backyard’ or what they call in informal terms, NIMBY. The strange stance adopted by various RWAs is not opposition to commercialisation of the city, but selective commercialisation which does not affect vested interests.

One RWA president from Indiranagar presented a list of objections to the government when the Draft Common Zoning Regulations for Bengaluru were released. The list included (quoting from The Hindu):

1. The notification was against the 74th Amendment to the Constitution which provides for planning to be undertaken by the Metropolitan Planning Committee or the municipal body, and not by the state government.

2. The objections also state that the “right to life” of residents of the city will be challenged because of commercialisation, which is a violation of public trust.

Another bunch even speculated that zoning reforms will lead to "overcrowding and increase in traffic on narrow roads, worsen the parking problem, and add to the garbage problem”.

While I do not agree with the views of the RWAs on zoning reforms, I do understand where they come from. They are, after all, groups created to maximise the welfare of a set of residents in a particular locality with very specific pet peeves ranging from:

b. Preventing any commercial activity near the places of their residence (even on land not owned by them)

c. Preventing younger professionals from moving into these localities

Of the three, I definitely agree with the third. An increasing number of professionals from my generation have rather loathsome habits ranging from a general lack of etiquette, to frequently smoking up in places of their residence, to public displays of drunkenness among several other negative traits. On the whole, the RWAs manage to represent the interests of its members quite well. Their pet peeves influence public discourse on zoning regulations, partly because people in the media share them to an extent and definitely because those residents who don't share these views are not as organised.

In the midst of this impasse over zoning reforms, however, Bengaluru hasn't stopped growing. Newer localities continue to develop on the peripheries of the city, further away from the city centre, but closer to newer areas of commercial development. Newer areas of commercial development necessarily have to be at the borders of the city, given that the Central Business District (CBD) is quite small and the Floor Area Ratio (FAR) allowed in this area is low, as a result of which commercial development isn't allowed even on 30-foot roads of residential areas. This phenomenon is the product of a need that almost every reader will identify with – the need to live close to one’s office. At the same time, given the distances between the various commercial and industrial areas of the city, commute times for most residents, especially those belonging to the lower middle class and the poor, will continue to skyrocket. The upper middle class and the rich are not completely unaffected either.

The question one needs to ask is what can be done to break this impasse, or rather, find a solution acceptable to most RWAs as well as address the need for zoning reforms in the city. This writer thinks that the answer to this problem (like many others) lies in learning from the Japanese. Whoever had a role in drafting the Bharatiya Janata Party’s (BJP’s) manifesto for the 2018 Karnataka elections seems to have held a similar view. This is what the BJP promised to do:

The Japanese implement a much more stratified model of zoning where they divide residential zones and commercial zones even further according to noise levels. Such levels of stratification are neither desirable nor possible in a city of ours, which is barely law abiding. The zoning model, however, does offer us a way to get out of our current impasse with respect to zoning reforms.

In addition to this, a few more measures can be undertaken by the state government to address the shortage of commercial spaces near the city centre. They are as follows:

1. The Revised Master Plan 2031 for Bengaluru has done a good job in identifying first order markets in the city (CBD) such as Mahatma Gandhi Road (also Brigade Road and Commercial Street), Shivaji Nagar, Gandhi Nagar, Krishna Rajendra (KR) Market, and Kalasipalya. Zoning regulations along with land use conversion norms and FAR limits can be relaxed here (to any politician reading this and is interested in proposing this, I would suggest renaming the CBD as the Kempe Gowda Innovation Zone when proposing it. This will increase the acceptability of the proposal). RWAs don't have much interest in an area which is already commercial.

2. Increase the density of the metro network within the city and allow relaxed zoning rules, change in land use norms and FAR limits in the area within X km (0.5-1 km) radius of the metro line. RWAs can't use the excuse of traffic problems here due to the existence of metro lines. BBMP, the municipal body, and Bengaluru Metro Rail Corporation Limited can make money out of the relaxation of rules here to fund the metro lines as well as any new infrastructure in the area.

3. Acquire 2,000-4,000 acres through the Bengaluru Metropolitan Region Development Authority near Nelamangala, Bidadi, Kanakapura, Dabaspet, Hosakote and any other town around Bengaluru, and extend the Bengaluru Metro to the area and auction 200-acre plots to private developers to build integrated townships free from zoning rules, change in land use norms and FAR limits. The benefit with large-sized integrated townships built by private developers is that the state would not have to spend anything on providing sewage, roads and similar infrastructure in the area. Such infrastructure would be the sole responsibility of the private developer. This can even be sold to the voting public as a plan to decongest the city (which it partly is). Moreover, RWAs will have no interest whatsoever in opposing such a proposal.

Bengaluru as a city desperately needs to break the impasse over zoning reforms. What remains to be seen, however, is the level of interest the current political leadership of the city and the state has in solving this problem. This writer certainly hopes that Chief Minister H D Kumaraswamy finds it politically and financially beneficial to make some headway in the matter.