A Step Towards Dignity: Transgender Persons Bill Passed In Lok Sabha With 27 Amendments 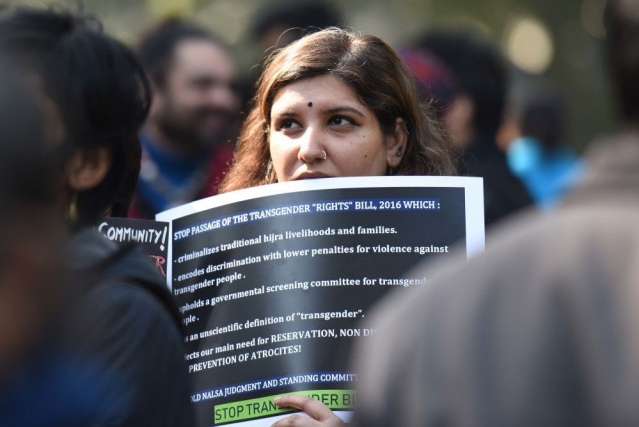 Transgender community members and supporters protest against Transgender (Protection of Rights) Bill 2016, and and other demands at Jantar Mantar, on December 17, 2017 in New Delhi. (Photo by Arvind Yadav/Hindustan Times via Getty Images)

The Lok Sabha on Monday (17 December) passed a bill that aims to empower the transgender community by providing them a separate identity, Deccan Herald has reported.

The Transgender Persons (Protection of Rights) Bill was passed in the Lok Sabha amid calls from opposition to defer the legislation for a wider debate.

The bill also prohibits discrimination against transgender persons including denial of education, healthcare, employment, right to movement and right to rent and own property among others.

As many as 27 suggestions made by the parliamentary standing committee had been accepted by the government and accordingly amendments were made in the bill, Social Justice and Empowerment Minister, Thawarchand Gehlot informed.

Many in the opposition argued that the bill has many flaws and urged the government to withdraw it.

However, Social Justice Minister said the objectives of the bill included protecting interests of transgenders, defining the term 'transgender', providing them recognition and setting up of a national transgender council.

He said the bill was complete and no further discussion was required on it. The bill was passed after incorporating 27 amendments moved by the government.

The Modi government, in 2016, had introduced the bill in the Lok Sabha from where it was sent to the consideration of the parliamentary standing committee.