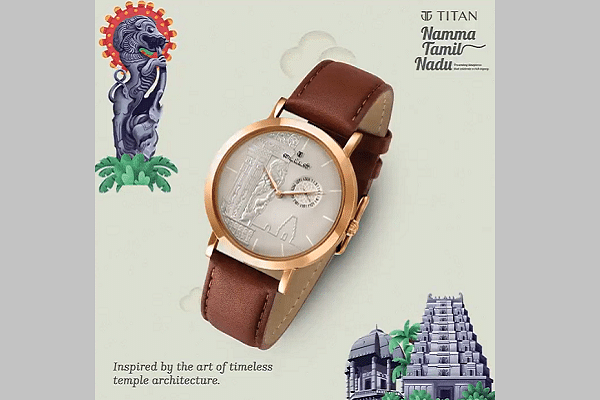 Here is the advertisement in question:

What a brilliant ad, @titanwatches!

This New Year and Pongal, will be gifting watches from this collection for sure! pic.twitter.com/fo1farPC7Y

The advertisement contains stunning footage of iconic temples in Tamil Nadu like Darasuram, Brihadeeswara and Kailasanathar.

The advertisement goes, “Travel around our land, where even stones speak of poetry” as one can see a boy caressing the ancient temple stones and women making flower garlands used in pujas.

Temples, Kanchi silk and relics of the Tamil-Hindu culture featured prominently in the advertisement which led many to hail Titan for its effort.

While a sizeable section of social media was praising Titan, a swarm of Dravidian activists descended and began slamming the watchmaker for passing off “Brahminical traditions as Tamil culture”.

Why #BoycottTitanWatches is trending?
Recent Ad of @titanwatches has depicted Brahminical books, culture, food, anti Tamil writers&Godmen as Tamilnadu's culture. There is nothing Tamil in it. Brahmin Chauvinism has reached a new high in this Ad.Titan must apologize to Tamils

Tamils are not Brahmins, you fools @titanwatches

That 3% Aryans doesnt represent us 97% Tamils!.#BoycottTitanWatches

Some social media users claimed that one of the reasons why the aforementioned activists were irked, was a brief newspaper clipping in the advertisement which reportedly stated, “Rajini will crush Stalin”.

While the Dravidian activists were lambasting Titan, many social media users came to the watchmaker’s rescue and also promised to buy its products.

Will not #boycott Titan watches. pic.twitter.com/pdzkJTgy98

If they want to boycott Titan watches for this,

they want to boycott the rich Indian architecture, History, culture and Traditions,preserved for generations that is is holy and sacred for us.#BoycottTitanWatches
pic.twitter.com/Fa4FopXd8F

I got this on internet :-
The watches equipped with rich canvas of culture, art and language of Tamil Nadu -- be it temple architecture

Titan watches has launched a new chain of limited edition watches with the aforementioned Tamil-Hindu themes inspired by Tamil temple architecture and script.