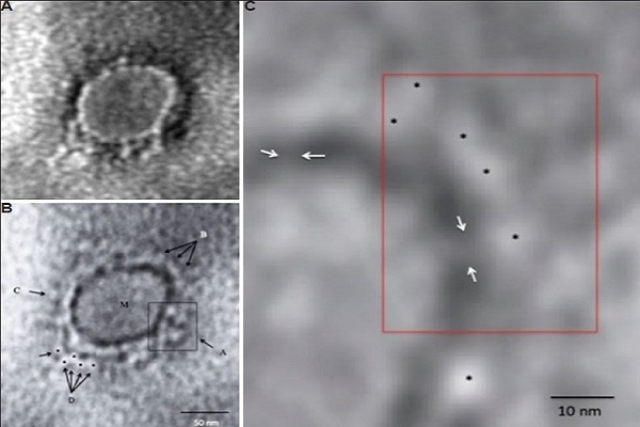 A NIV Pune team led by Deputy Director and Head of Electron Microscopy and Pathology Dr Atanu Basu, has released the first images in the country of SARS-CoV-2 the virus responsible for Covid-19.

These pictures have been published in the Indian Journal of Medical Research, Hindustan Times has reported.

The viral samples were acquired by the scientists via throat swab of India’s first Covid-19 positive patient in Kerala.

Here are the miroscopy images of the virus:

As per the report, the images have revealed that the SARS-CoV-2 virus closely resembles the MERS-CoV virus responsible for the Middle East respiratory syndrome.

Following gene sequencing at NIV Pune it was found that the virus is 99.8 per cent identical to the one which emerged in Wuhan.

In order to produce the image the team led by Dr Basu used centrifugation to remove debris from the sample. The virus particle is 75 nano metre long and shows patchy stain pooling on the surface and a distinct envelope projection which ends in a round glycoprotein spike on the viral surface.

Incidentally these spikes only bind to specific receptors on the host cell.