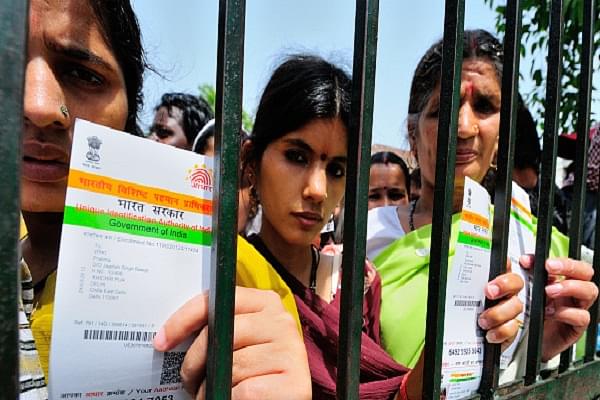 Women with their Aadhaar Cards at a government camp in New Delhi. (Photo by Priyanka Parashar/Mint via Getty Images)

On Friday (4 January 2019), the Lok Sabha passed a bill carrying amendments to provisions of three existing laws, to give effect to the government’s decision to move towards voluntary linkage of Aadhaar with mobile numbers and bank accounts, reports Mint.

The three laws which will be amended are the Aadhaar (Targeted Delivery of Financial and Other Subsidies, Benefits and Services) Act, 2016, the Indian Telegraph Act, 1885, and the Prevention of Money-laundering Act, 2002.

The move comes in the aftermath of a Supreme Court order in September stating that Aadhaar can only be used for the transfer of state subsidies or for government welfare schemes, and not by private corporations to authenticate customers. The court had also noted that linking Aadhaar with bank accounts or mobile numbers was not a mandatory requirement.

About the bill, IT and Law Minister Ravi Shankar Prasad stated to the Lok Sabha, “The cabinet will pass the Bill, I am not passing it. Aadhaar is for the people of the country, we had opposed Aadhaar before because there was no Act, our government has brought in a rule. Digital identity confirms the other forms of identity. Through Aadhaar there will be a check on corruption.”

On the other hand, some opposition parliamentarians have called some of the amendments in the bill a violation of the apex court’s ruling. Congress MP Shashi Tharoor, along with others, called for a data protection law to be passed before the Aadhaar amendments are cleared.

The amendment bill will allow for the verification of Aadhaar number holders through QR codes, without the need for giving out biometric or other information to government centres.

The bill states “no offline verification-seeking entity shall— subject an Aadhaar number holder to authentication; collect, use, or store an Aadhaar number or biometric information of any individual for any purpose; take any action contrary to any obligation on it as may be specified by regulations.”