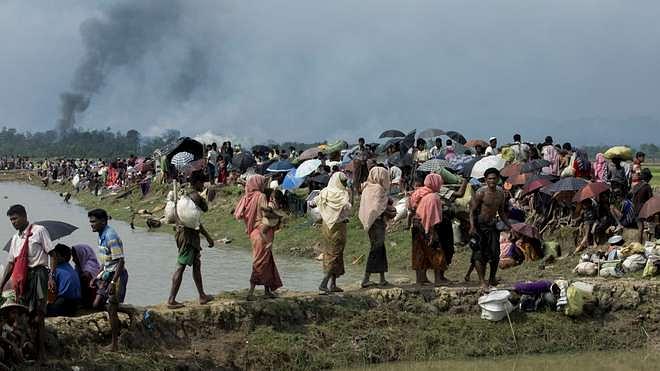 Rohingya Refugees in Ukhia along the Myanmar-Bangladesh border. (KM ASAD/AFP/GettyImages)

With the European Union (EU) imposing sanctions on seven key Myanmar army officials, Malaysia announced the ouster of one of them, Major General Maung Maung Soe, chief of the Western Command in August last year when the military launched a crackdown on numerous Rohingya Muslims along the Myanmar-Bangladesh border. The country also announced that Lieutenant General Aung Kyaw Zaw, leader of the Special Operations Bureau during the crackdown had resigned.

A statement released yesterday (25 June) said that under Soe’s command, security problems arose that resulted in Rohingya-led attacks on military and police outposts.

Both the officials were a top a list of officials that the EU had sanctioned, thereby barring them from travelling to the EU and freezing any assets they may own there. Earlier in April, the EU had imposed an arms embargo on Myanmar.

EU foreign policy chief Federica Mogherini said that the Union wouldn’t add any more names to the list as their priority was to protect democracy in Myanmar. A report in the Wall Street Journal added that following the EU sanctions, Canada too, announced sanctions against the seven men with foreign minister Chrystia Freeland referring to the crackdown as ethnic cleansing..

The United States had imposed sanctions against Soe in December but hasn’t extended it to other officials.