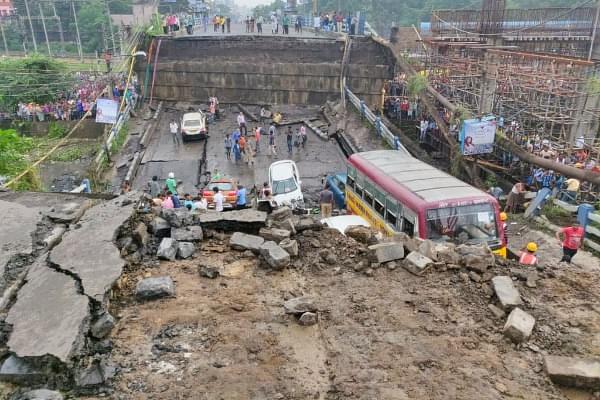 The collapsed bridge in Kolkata (@INCWestBengal/Twitter)

Following the collapse of a bridge in Kolkata, West Bengal Chief Minister Mamata Banerjee has said that she is unable to return to the state capital today evening as there are no flights, NDTV has reported.

On Tuesday evening (4 September) a portion of Majerhat bridge collapsed in Kolkata, resulting in injuries to seven people after vehicles were trapped in the debris. The bridge is situated on the Diamond Harbour road.

Following the incident fire brigade, police, NDRF and the Indian army was called to help with the rescue operations.

Reacting to the incident, the official twitter account of the Trinamool Congress (TMC) expressed worry, but said that Mamata and others were unable to return as there are no flights back from Darjeeling:

We are very worried. We are receiving information from the rescue team on ground. We want to go back as soon as possible. There are no flights in the evening, we are unable to do so: Mamata Banerjee (now on an official visit to Darjeeling)

Mamata has also assured that a detailed investigation would be ordered, but the current priority is relief and rescue.

This isn’t the only time a bridge has collapsed in the city, thereby raising questions over the state of public infra in the state capital.

In March 2016, a 150-metre portion of under-construction Vivekananda flyover had collapsed in a very busy section of the city, which led to the death of 27 people.