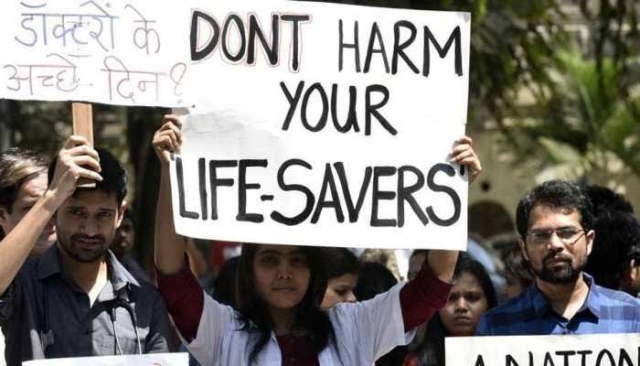 Doctors all over the nation are standing in solidarity with their colleagues in West Bengal. (Twitter image/@Kritika76263279)

The Resident Doctors Association (RDA) of the All India Institute of Medical Sciences here has written to Union Home Minister Amit Shah and urged for the implement a proposed law that prohibits violence against healthcare professionals and clinics.

In the letter dated 16 April, the RDA said that in spite of an advisory issued by the Home Ministry to ensure protection to the doctors, there were multiple instances of violence against them all over the country.

At least seven incidents of violence against the healthcare workers, amid the novel coronavirus outbreak in the country were mentioned, including the Moradabad incident of 15 April, wherein a team of doctors and other medical staff were attacked by a mob.

The RDA also mentioned the incident reported at the Lok Nayak Jai Prakash Narayan Hospital wherein a female doctor was allegedly assaulted by a patient on 14 April.

The letter noted that the healthcare professionals were not scared of infection but assault and abuse by the very community getting treatment.

"This has become an emerging unforeseen 'occupational hazard'. We treat our patients suffering from life-threatening diseases and infections without getting worried about our own safety but what we get in return is violence from the relatives of patients," the RDA said, adding that "we request you to implement 'The Health Services Personnel and Clinical Establishments (Prohibition of Violence and Damage to Property) Bill' as proposed by the Ministry of Health."