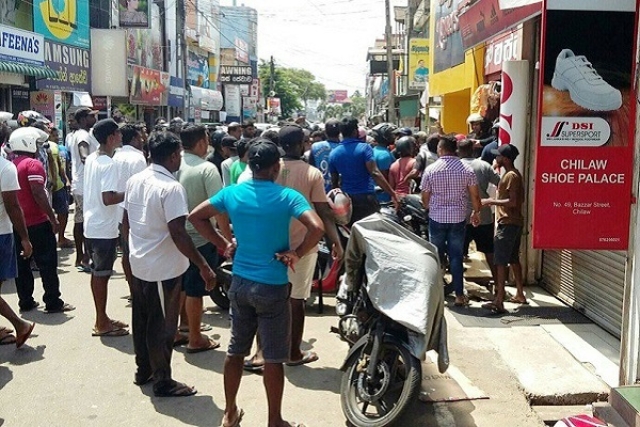 People out in the streets of Chilaw (Pic via Twitter)

Social media platforms including WhatsApp, Facebook and YouTube have been temporarily blocked in Sri Lanka via a notification by Government Information Department, Daily Mirror reported.

The decision to ban social media sites was taken in an effort to stop the dissemination of communally charged rumours following the violence clashes which erupted in Chilaw and the Kuliyapitiya area last evening.

Tensions between the minority Muslims and majority Sinhalese have escalated in the wake of the Easter Sunday bombings which killed nearly 260 people.

The digital blockade comes a day after Sri Lankan police imposed a curfew in the  western coastal town of Chilaw where an irate Sinhalese-Buddhist mob targeted a mosque and few commercial establishments owned by Muslims over a dispute triggered by a Muslim shop owner’s Facebook post.

Late in the evening on Sunday (12 May), the communal unrest spread to Kuliyapitiya where a mosque and a few Muslim owned shops came under attack, prompting the authorities to impose curfew in the northwest town. The curfew has since been lifted in the two towns.

Facebook and WhatsApp were blocked from midnight following violent incidents between the minority Muslim and majority Sinhalese communities, officials said.

Nine suicide bombers, including a woman, carried out a series of devastating blasts that tore through three churches and three luxury hotels, killing 258 people and injuring over 500 others on 21 April.

The Islamic State claimed responsibility for the attacks, but the government has blamed local Islamist extremist group, the National Thawheed Jama’ath (NTJ), for the bombings.

In the aftermath of the terror attack, several Sinhalese-Buddhist nationalist groups have sprung up on Facebook, reviving calls for boycotts of Muslim-owned businesses and spreading hate. Muslim groups too have been organising themselves on Social Media following the attack.