Staring At Political Irrelevance After NDA’S 10% Reservation For General Category, Hardik Patel To Formally Join Congress And Fight As Its LS Candidate 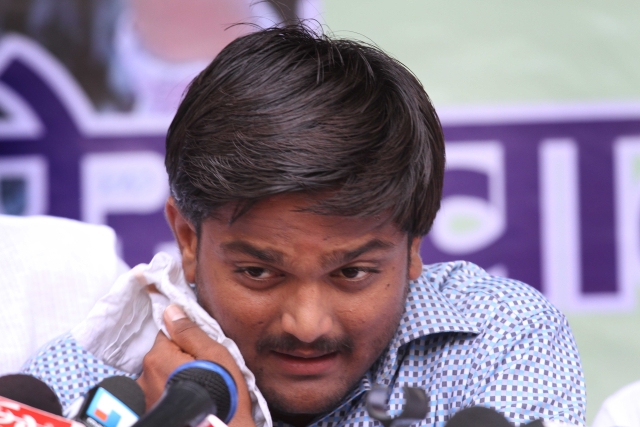 Political circles in Gujarat are abuzz with speculation that Patidar Anamat Andolan Samiti (PAAS) convener Hardik Patel is likely to join the Congress ahead of the upcoming parliamentary election and will be fielded as the party candidate from Jamnagar Lok Sabha seat, The Times Of India reported.

Hardik getting aboard that Congress bandwagon will lend credibility to the accusations that he was acting as the handmaiden of the party in its efforts to undermine BJP’s s strong support among the Patidars.

According to the political observers in the state, Hardik was staring at complete political irrelevance given that Modi led NDA government has already began implementing 10 per cent reservation in government jobs and higher education for economically weaker sections in the general category after successfully passing the constitutional amendment in both houses of the parliament.

According to the ToI report, Hardik has met senior leaders of Congress in Delhi the formal announcement of his entry in to the party done at the Jan Sankalp rally after the Congress working committee meeting in Ahmedabad on March 12 or during a public meeting of Congress president Rahul Gandhi.

Banking on the consolidation of Patels, Muslim and Dalits, Hardik fancies himself as a strong contender in Jamnagar Lok Sabha seat.

In 2015, Hardik mobilised over two lakhs Patidars in the GMDC ground in Ahmedabad and his arrest the same night sparked large scale violence, catapulting the then little-known 22-year-old activist as the face of Patidars' fight for reservation.

Despite a section of national media pitchforking him into the limelight and his overt support to Congress party in its attempt to overthrow the BJP government in Gujarat, Patel’s Patidar Anamat Andolan Samiti (PAAS) has been steadily losing its momentum. It has been hit by desertion as several key lieutenants of Patel, including Reshma Patel, Varun Patel, Chirag Patel, Dinesh Bambhania and Amris Patel, left him in the run-up to the 2017 Gujarat assembly elections.

In yet another setback, Patel has been sentenced to two years imprisonment and fined Rs 50,000 by a court in Visnagar for indulging in vandalism during the violent protests in 2015. The court found Hardik Patel and two of his associates guilty of resorting to arson and creating a ruckus at the office of BJP legislator Rushikesh Patel in Visnagar. P

In August 2018, Hardik went on a 19 day fast demanding reservation for Patidars but has ended his fast as the Gujarat government has refused to budge to his demands,