A Rural Idyll Lost In Translation 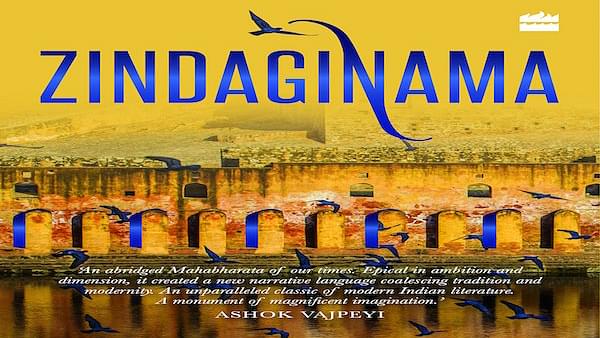 Krishna Sobti’s Hindi novel Zindaginama (Chronicle of Life) is often described as her magnum opus—a work that represents the very acme of her glittering literary career. Set in rural Punjab (in the part that is now in Pakistan) in the early years of the last century, it has been hailed as an epic novel that vividly depicts life as it was lived in that antique locale.

In 1980, Sobti, who is now 91, and is also known for such critically acclaimed works as Mitra Marjani, Dil-O-Danish and many others, won the Sahitya Akademi award for Zindaginama. In 1996, she was awarded the Sahitya Akademi Fellowship, the highest honour awarded by the Akademi.

Hence, the translation of Zindaginama into English was long overdue. However, there are times when the essence of a work—and, therefore, its appeal—is lost in translation. This is especially true when a literary work is built entirely on a slice of folk life, one where the colours, tastes, rhythms and quotidian practices of that life predominate over the drama and trajectory of a human story. The rural idyll that Sobti evokes in her book is all about the everyday and the humdrum, the small human joys and sorrows, the goodness and generosity, the scandals and sensations that are woven into the warp and weft of life in a remote village.

Unfortunately, this translation never quite manages to make you feel that this is enough. Indeed, reading Zindaginama in English—and the fulsome praise from critics that adorn the book’s blurb, one is tempted to learn Hindi so as to be able to read the work in the original. Perhaps then one might appreciate its avowed greatness.

Zindaginama plays out in an unnamed village in the Gujrat area of Punjab in present-day Pakistan. The narrative revolves around the Shah family, whose heads are rich landowners and moneylenders. The two brothers Shahji and Kashiram—the one kind but pragmatic, the other almost saintly in his generosity—represent not just money power. The villagers look to them for wisdom and information about the world without.

In the evenings, the men gravitate towards their haveli and sit burbling on their hookahs, exchanging news and gossip.

The brothers’ wives, along with other womenfolk and assorted chachis, tais and bebes, are the centre of the cultural life of the village. They observe rituals and festivals, churn the milk, make an abundance of ghee, butter, besan ki roti and suchlike; they sing songs of the earth and of love and loss, dispense shagun (auspicious articles), assist at childbirths; they moan if they are barren and rejoice if they are blessed with a child.

Rooted in their age-old traditions, the villagers—Hindus, Muslims, Sikhs, Gujjars, and every other caste and community—live in perfect harmony. Indeed, but for the occasional reference to the rule of the firangis and the division of Bengal (the British bifurcated the province in 1905), Sobti’s village could be immured in a timeless past.

It is only towards the latter part of the book that the author makes a sudden dash to place her story in a historical and political context. The minions of the British Raj come to recruit men for the Great War; villagers discuss British oppression and the Ghadar movement (a rebellion to overthrow the British that began in 1915 and was spearheaded in large part by Sikhs). They talk about the execution of revolutionaries from Bengal and of Mohandas Karamchand Gandhi standing up to the White rulers in South Africa. The winds of change have begun to blow, and the reader knows that zindagi (life) will never be the same again.

Sobti is, without a doubt, a remarkably visual writer. Her canvas is painted in rich colours, one where the gleam of the mud-washed floors, the gold of the ears of wheat, the white of the fair-skinned maidens with their tattooed chins and swaying parandas (tasselled hair extensions) are evoked in painstaking detail.

Indeed, the songs, the foods, the fragrance of ghee-chawal, laddoos and halwa, the earthy conversation of the village folk peppered with hai rabbas and balle balles that fill the narrative, all come together to bring the place, its society and people alive.

However, even as you immerse yourself in the simple rhythm of the zindagi of Sobti’s characters, you begin to miss something. Nothing much happens here. It’s just sunrise and sunset, sowings and reapings, the general amity and fellow feeling punctuated by minor contretemps—a murder here, an elopement there. Perhaps the writing style of the original has a vibrancy that renders the lack of plot irrelevant. The translation, however, fails to compensate for it. And in the end, you are left with an impression of having had a brush with a serene but stagnant pool.

Perhaps that is exactly what life was like in that time and place. It’s just that it doesn’t make for a very good literary harvest.

The idiomatic awkwardness of the translation doesn’t help matters either. Literal translations of Hindi phrases abound, and the effect is not always felicitous. For example, the phrase “sweeten your mouth” (a direct translation of “mooh mitha karo”) pops up again and again. At another place, someone says a government enquiry is not a “game of dolls” when a regular English phrase like “child’s play” may well have been used.

In 1984, Sobti sued fellow Hindi writer Amrita Pritam for copyright infringement when the latter published Hardatt Ki Zindaginama, the biography of a revolutionary. She felt that the use of the word “zindaginama” was a breach of her copyright. The case dragged on for years and was finally awarded in favour of Pritam in 2011—six years after her death.

Clearly, Sobti felt that Zindaginama was such a defining element of her oeuvre that even its name was important enough to be worth fighting a lengthy court battle for.

Pity that its English translation doesn’t manage to live up to that.

Shuma Raha is a senior journalist based in Delhi.