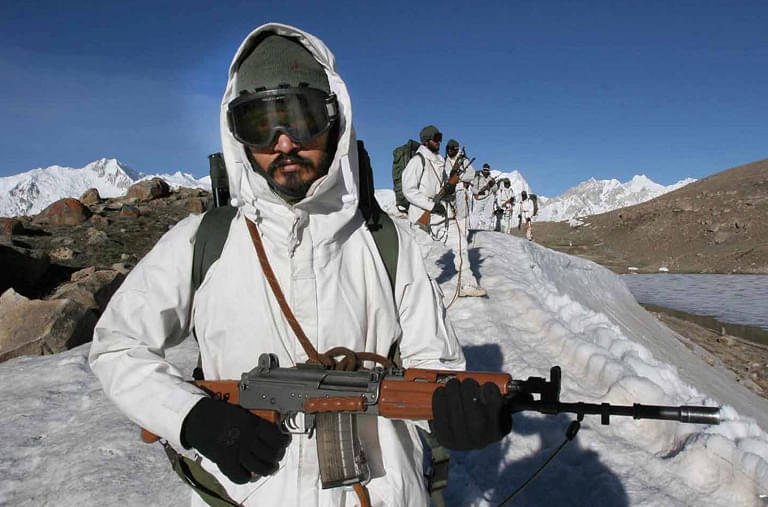 Though the formation of the Mountain Strike Corps has got delayed, many new initiatives are being implemented along the China border

For much of the last decade, the Perspective Planning Directorate of the Indian Army was engaged in evolving a road map that would transform the force into a lethal war machine capable of fighting future threats rather than perfecting its concepts for yesterday’s wars. Various groups were formed to look into force restructuring, logistics upgrade and acquisition of modern weaponry. The studies were based on the premise that a two-and-a-half-front war was imminent in the near future. In other words, Indian military planners were preparing for a possibility of simultaneous threats emerging from Pakistan and China combined with a deteriorating internal security situation.

The papers were prepared in anticipation of appropriate government support in terms of funding and restructuring. A major recommendation emerging out of the study was the need to bolster India’s defence posture along the northern frontier with China. The 4,000 km-long land border with China extending from Arunachal Pradesh in the East to Ladakh in the North-west, needed improvement on all fronts: roads, logistics bases, forward landing grounds for aircraft, communication and connectivity besides the presence of battle-ready and well-acclimatized troops stationed close to the border.

Accordingly, a Mountain Strike Corps, comprising some 40,000 troops armed with specialised equipment to fight in the high Himalayas, was envisaged as an offensive formation against China. The Strike Corps, as the name suggests, was to be different from the four different formations—3, 4, 33 and 14 Corps—currently deployed in a defensive mode along the China frontier. The planners wanted to raise this new formation to retain an option for offensive action inside Tibet in case hostilities broke out between India and China.

But the UPA Government was not fully convinced about the necessity of such a force,  and was loathe to sanction it. Then, in the summer of 2013, a small band of Chinese troops intruded some 20 km inside Indian territory in Ladakh’s Depasang plains and stayed put there for a good three weeks, triggering a military and diplomatic standoff. The intrusion crisis was resolved after hectic diplomacy but the Manmohan Singh government, under pressure of hostile public opinion, sought a solution from the Army.

As the proposal gathered steam, two notes were prepared for the Cabinet Committee on Security (CCS), India’s highest-decision making body on matters of security. One file contained details of the overall concept and justification for raising the Mountain Strike Corps and the other sought additional funding, over and above the sanctioned defence budget to equip the new Corps.

In an inexplicable move, the CCS under UPA II gave its approval for raising the Mountain Strike Corps but withheld clearance for additional or specific funding! The mammoth funds (some Rs 80,000 crore spread over seven years) were never sanctioned.

A temporary Corps HQ was raised in Ranchi on January 1, 2014, to be shifted to its permanent location in West Bengal’s Panagarh. However, for more than a year, the new formation was starved of specific funds, forcing the Army to “cannibalise” its War Wastage Reserves (WWR)—stores earmarked for emergencies for sustaining the troops in the event of a war.

In late December 2014, The Tribune newspaper reported  that the Army’s Vice Chief, Lt Gen Philip Campose, admitted to the use of WWR for equipping the Strike Corps. “We are not getting additional budget. A certain amount of about Rs. 5,000 crore has been set aside saying that this is meant for the Mountain Corps. But this is not over and above the budget. So, we need money over and above the budget to be able to make up all the stores and weapons which we have pulled out from the War Wastage Reserves for the initial raisings,” he is supposed to have told the Standing Committee on Defence.

After he took over as Defence Minister, Manohar Parrikar was briefed about the status of the Mountain Strike Corps. He realized the necessity of having such a force but was also cognizant of the fiscal reality. While agreeing with the army brass that India must move from a “dissuasive” posture against China to acquiring a credible deterrence for maintaining the power equilibrium in Asia, Parrikar reminded them of the lack of finance in the immediate term. So he ordered a review and a freeze on cannibalising existing resources.

His orders and a couple of misinterpreted public pronouncements led to a sense of disquiet in the Army HQ. Many thought Parrikar had decided to scrap the Mountain Strike Corps. But on 21 May, speaking to a TV channel, Parrikar clarified that all that he had done was to slow down the raising of the Mountain Strike Corps and had not ordered any cancellation. His argument was: the current fiscal and infrastructural reality must be taken into account.

While shortage of funds can be overcome once the expected surge in India’s economy takes place in the next couple of years, there is also the physical factor. Building infrastructure to support additional troops and their equipment in the mountainous regions of Arunachal Pradesh, Sikkim and Ladakh is a slow process, given the limitations of terrain and weather. Unless a proper logistics chain is built, capacities of roads and airstrips are increased and proper facilities are built in these areas, the Mountain Strike Corps will not be effective.

In a way, therefore, reordering the timelines for fully raising the new formation is a blessing in disguise for both the Northern and Eastern Commands, ranged against the Chinese. Neither command currently has the requisite infrastructure to support additional troops.

Meanwhile, many new initiatives are in the process of being implemented along the China border. For instance: A new Air Force Station to base fighter jets is being built just 25 km from the Line of Actual Control (LAC) at Muth near Nyoma in Ladakh. This is the first time India will be deploying combat jets in the high-altitude area.

For the first time since the country’s Independence, a regiment of tanks is stationed in Ladakh. Even Sikkim has witnessed induction of mechanised infantry and a small complement of tanks over the past couple of years. One more infantry brigade (3,000-plus troops) has moved closer to a crucial area where Chinese troops had intruded and stayed put for over three weeks in 2013.

Work has been accelerated on at least 13 strategically important road projects in this region. In Sikkim and Arunachal Pradesh, new roads, strategic railway lines and key location points for basing more military assets are under various stages of construction. The belated border area development has come not a moment too soon. India is at least a decade behind China in building huge infrastructure in the Tibetan Autonomous Region (TAR). Since the 1990s, China has built a network of roads, airports and railway lines in the TAR,  which gives the PLA a distinct advantage when it comes to mobilizing its forces if needed.

The Qinghai-Tibet Railway that connects Lhasa to mainland China has come closer to the Indian border at Xigatse (near Sikkim) last August. By 2020, a rail link to Nepal’s capital Kathmandu is also planned. According to an Indian assessment, there are 15 airfields in the TAR, 12 of them meant exclusively for military purposes. The Indian military, on the other hand, is still dependent on a few old airstrips and a couple of airfields built in the 1960s.

Even as the infrastructure work gathers pace, the army’s topmost leadership has had a preliminary discussion on ways to balance the need to acquire an offensive capability against China and the fiscal reality. Informed sources say that the army’s top brass will look at the possibility of internal accruals by tweaking its ORBAT (Order of Battle) against Pakistan.

In simpler terms, an assessment is likely to be ordered to relook at the three existing strike corps (I, II and XXI) ranged against Pakistan. The armour- and mechanised infantry-heavy strike corps are all deployed on the Western front. They are considered essential for the Cold Start doctrine—designed for lightning strikes against Pakistan in the event of a war. This was proposed by the Indian Army after the experience of Operation Parakram in 2002, when the strike formations took a long time to mobilise, forcing the then NDA government to go slow on its plan to punish Pakistan in the wake of the attack on Parliament in December 2001.

Although a full-fledged war with China is unlikely in coming years, India must continue to build a credible deterrence against the much larger—and stronger—adversary. That can happen only if the plans to build infrastructure and military strength get implemented in time.

This piece appeared in the June 2015 issue of our magazine.