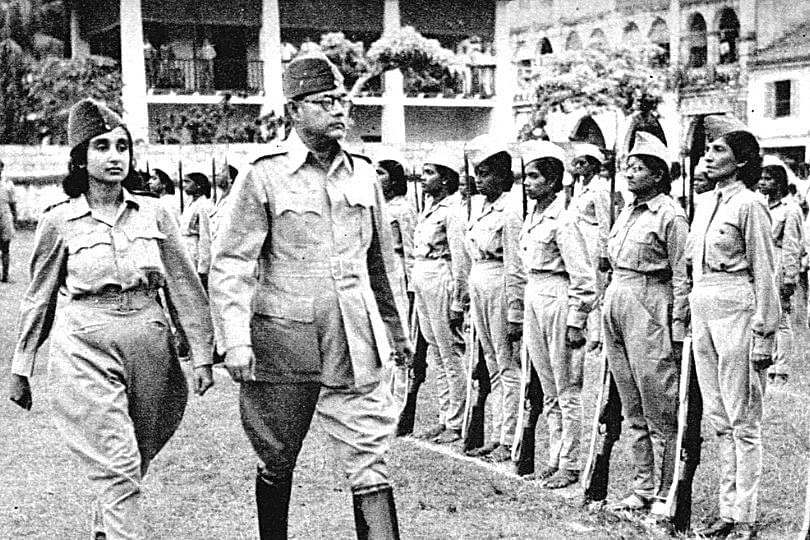 It is not often that a forgotten and glorious chapter of a country’s history is resurrected and presented to its people and the rest of the world, and that too by a foreigner. This is what India now sees with the publication of a riveting and meticulously researched account of the INA’s Rani Jhansi Regiment (RJR) authored by Danish historian Vera Hildebrand.

As the author says, this unit was the first in recorded military history that comprised only women. Admittedly, the Soviet Union’s Red Air Force in World War II had a few squadrons of women pilots, but the support staff included men. In any case, these squadrons were not formally designated as “women’s regiments”. The RJR’s status as the world’s only all-women ground forces fighting contingent remains uncontested.

The sad part is that we needed a foreign scholar, admittedly an Indophile like Hildebrand, to come up with a book like this. It is not only her deep empathy for our freedom struggle that comes through; it is also her perception, insight, commitment and sheer hard work that one must admire.

The publication of this remarkable study at this juncture is important. In the last few years, we have seen some well-meaning, but sporadic, uncoordinated and poorly planned initiatives to present a balanced perspective of our freedom struggle.

This writer has said many times that most of India’s post-independence historians have conducted themselves disgracefully when it came to analysing and assessing our freedom struggle. At worse, they behaved like factotums of a single family and party; at best they displayed lamentable biases and ideological slants that were blatantly distorted and factually inaccurate. The minority who sought to present a balanced picture were sidelined by New Delhi’s establishment and the mainstream media. Even the reputed university departments did not give sufficient space and importance to these lone scholars.

Hildebrand puts in considerable effort to construct the socio-historical canvas for her narrative. Young Subhas went through a trajectory whose origins were very similar to that of Jawaharlal Nehru, before their two paths diverged so radically. Both the fathers of the young boys were affluent lawyers, one, Janakinath Bose, in Cuttack, and the other, Motilal Nehru, in Allahabad. Young Subhas started his academic life in an English missionary school, Stewart College in Cuttack, where all his brothers and uncles had studied. JLN was packed off by his doting father to Harrow in England where he could be moulded into a brown Englishman.

Subhas, on the other hand, was transferred to an Indian institution, the Ravenshaw Collegiate School, at the age of 12, and this proved to be a turning point in his life and psyche. The principal, Beni Madhab Das, had a profound impact on the young boy and became his life-long mentor. In Bharat Pathik (Indian Pilgrim), Subhas recounts how Principal Das changed his entire mindset and inculcated in him a profound attachment to Indic culture, civilisation, not to mention moral values.

Kalyani and Bina, the two daughters of Principal Das, became prominent members of the revolutionary wing of the freedom movement and had many stints in British imperial prisons in the 1920s and 1930s. Subhas continued to remain in close touch with them and Principal Das till his escape from India in January 1941.

The interface between Subhas and the Gandhi-Nehru duo was also a very important chapter in Indian political history. Hildebrand pithily describes how Gandhi treated Subhas within the Congress party and outside. The denouement, of course, was the landmark Tripuri Congress session of 1939, in which Subhas Bose won a decisive victory over Gandhi’s proxy candidate Pattabhi Sitaramayya and Gandhi came up with his disgraceful statement about Sitaramayya’s defeat “being more mine than his”.

This was when the bridges between Netaji and the Indian National Congress were decisively burnt.

After having laid out the political-historical backdrop for her main theme, Hildebrand has a very empathetic (at least for a West European) assessment of Netaji’s views on women. Here again, Subhas Bose and Gandhi were poles apart. Whereas Gandhi had an antediluvian attitude towards women that conceded some limited space to them quite grudgingly, Subhas, on the other hand, wanted women to be fully educated and capable of participating in independent India’s politics, business, society and academics on equal terms as men.

Subhas genuinely believed that the members of the Rani of Jhansi regiment would successfully match their male counterparts in every endeavour.

The choice of Lakshmi Swaminathan as a key figure in the formation of the RJR was particularly apt. She had everything going for her and she emerged from the battles and struggles with a larger-than-life image.

There are many interesting vignettes in the entire book about the setting up of the Rani of Jhansi regiment, its impact on the resident Indian population of Singapore, Malaya and Burma, and the problems faced by Netaji and his senior officers in forming the unit. There were many sceptics but ultimately they were won over. Whether the Ranis (as the members of the regient were designated) would actually be sent to the battlefront is not clear. Subhas was categorical that the sight of combat women soldiers in Indian territory would induce the men of the British Indian Army to desert to the Indian National Army.

Hildebrand’s book, of course, is a mine of information on the Rani of Jhansi regiment but also has an enormous amount of research into the Indian National Army as a whole. The personal interviews that the author had with the surviving Ranis, after tracing them down in various parts of South-East Asia and in a number of Indian cities, would, by themselves, constitute a major achievement. This is because we have rare personal insights on Netaji and how he was perceived by his woman soldiers. Hildebrand also draws upon the books written by former Ranis on the INA and the RJR.

There are a few unnecessary detours in the book. The entire section on the relationship be-tween the Ranis and their male comrades in the INA does not add much to the basic qualities of the work as a whole, but one should be generous in allowing the author the prerogative to wade into this area. Hildebrand also raises some valid queries about the conduct of Captain Lakshmi Swaminathan after she surrendered to the British forces in June 1945, but she confesses she is unable to come to any definite conclusions about the actual role played by the RJR leader at this juncture.

The important point to note is the impact of Netaji on the Ranis. Clearly, he was a larger-than-life figure for them. Each one was mesmerised by his personality and had nothing but admiration and complete devotion for the man. The figures tell the tale Hildebrand confirms that not a single Rani either surrendered or deserted. Even though the RJR never saw actual combat in war, its impact on the psyche of Indian women can never be underestimated. The book’s summary is noteworthy: the Ranis never abandoned their loyalty to their cause or their faith in Netaji. They remained convinced that he was leading them and their country towards freedom and equality for women.

In passing, one must note that Hildebrand’s book also raises substantive questions about the entire narrative of the Indian freedom movement that has been presented to the country by the Congress-Gandhi-Nehru camp. She hints in many places about the completely different terrain that India would have traversed if Netaji had been at the helm of affairs after independence. These thoughts of the author are interspersed randomly throughout the book’s discourse and for this writer, they are a most welcome initiative.

The final epitaph in this book on the Rani of Jhansi brigade and the Indian National Army should be left to the author’s own words: “Despite the failure of their noble ambitions, the Ranis and their leader deserve to be honoured for their commitment to the highest of human aspirations-- freedom.”