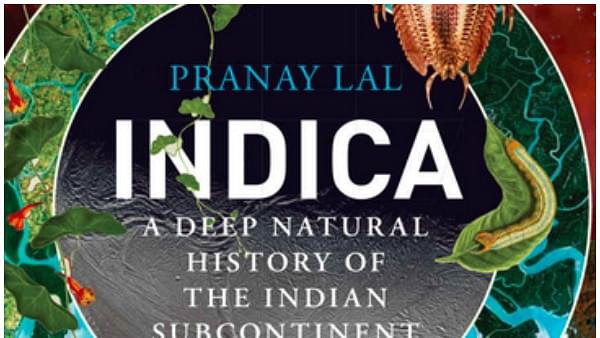 I have a signed copy of David Attenborough’s The Living Planet. I picked it up cheap from an old book store for a quarter of its original price which still was a considerable amount in Indian money. In the prologue of the book, I read about fossilised ammonites in the upper Kali Gandaki river valley in Nepal. The creatures, when they were alive, lived in the waters of a sea. Now they are found “not only 800 kilometres from the sea but some 4 vertical kilometres above its level”, writes the master producer of the finest earth documentaries.

As the Indian land mass moved closer and closer to the Asian mainland, the sea became increasingly shallow. The process continued for millions of years. Writes Attenborough: “Nor has this process stopped. India is still moving north at the rate of five centimetres a year and each year the rocky summits of the Himalayas are a millimeter higher.” Reading this fascinating account of the geological history of our planet, I could not help but wonder how nice it would be if we had a book that is completely devoted to the geo-bio evolution that happened in the land mass that is today India. When would we have our own David Attenborough?

As I read Indica: A Deep Natural History of the Indian Subcontinent, I realised that I do not have to depend on non-Indian authors to evoke in me the universal sense of identity you feel while reading a good science book. Here is a book typically Indian and its Indic nature complements the universal story it says; Indian science writing at its best when rooted in the terra firma that is India. Through the immensity of geological deep time, this book takes you on a pilgrimage which will change the way you look around you forever.

The author is Pranay Lal, a young bio-chemist and an artist who is also interested in the environment. He is India’s contribution to the list of chroniclers of the history of the planet from this part of the earth. The book takes us to the familiar natural sights we see every day around our country and places them in the context of the deep geo-bio evolutionary narrative. I live in Kanyakumari, the southernmost tip of the Indian mainland. Almost once every week, I find myself standing before the rocky sea shores of Kanyakumari looking at the evening sun. Right before me stand rocks and rocks. I have seen them, felt them and yet I know not their significance. I have taken them for granted.

Indica tells me that the rocks were ancient charnokites which were formed deep within the earth’s crust. Geologists call this part, where I used to stand with waves broken by these ancient rocks washing my feet in a gentle embrace, “Gondwana junction” because “this marks the place where India, Madagascar, Sri Lanka, East Antarctica and Australia were once joined together, forming the supercontinent Gondwana”. So that is where I stand, an ancient deep line on planet earth’s body. After I read Indica, when I went to the same place, I looked at the rocks and felt them glowing—the ancient spectators to changes in which you and I are not even a millionth of a wink of their eyes.

There is a fascinating portion on the dinosaurs which stalked the geological regions that are today India. Dinosaur nest sites have been discovered in the states of Gujarat, Maharashtra, Madhya Pradesh and Tamil Nadu. And whenever the news of a discovery was announced, there have been thefts and raids. In 1982, when Prof Ashok Sahni, a paleontologist, was asked by a young officer of the Geological Survey of India (GSI) about the often discovered “cannon balls” in their sites, Sahni studied the objects and found them to be dinosaur eggs. This was at a village called Raiholi. Lal says that the Raiholi site was perhaps the “largest nesting ground of dinosaurs” in the world. The proximity of eggs suggest communal breeding grounds. “The nests were made like hollows in the mud or sand and were lined with vegetation. In each nest the eggs were laid or arranged in a neat pattern so they would not roll around or bump into each other.”

There is the mystery of the Bruhathkayosaurus, which would have been the largest dinosaur to have lived not just in India but perhaps in the world. The story Lal narrates is exciting. In 1989, two paleontologists from GSI discovered fragmentary remains of the pelvis, vertebrae and the two-metre-long shin bone of a giant carnivore in Tiruchirapalli district and called this new dinosaur Bruhathkayosaurus (“bruhat” in Sanskrit means big, “kaya” means body). Speculative reconstruction of the dinosaur showed it should have been 34 metres long and should have weighed 85 to 139 tonnes.

However, the bones could not be safely brought back for studies and were washed away in a monsoon. The only evidence for Bruhathkayosaurus are today the blurred photographs which announce the discovery.

As questions started arising, the discoverers of Bruhathkayosaurus also claimed that they had discovered the remains of the last surviving stegosaurs from a marine bed in Ariyalur in Tamil Nadu. “Dravidosaurus”, as they called it, turned out to be a hoax, perhaps unintentional. However, that was enough to relegate the claims of Bruhathkayosaurus to the dustbin of similar paleontological hoax claims. Lal narrates these events and one can almost feel a sense of loss there. Only if Bruhathkayosaurus could have been proved to be true, how interesting it would have been! So he has provided us a reconstruction of the dinosaur, had it truly lived, and it is mesmerising in its gigantic proportions.

However, even without the lost Bruhathkayosaurus and the hoax of Dravidosaurus, India had a rich collection of exciting and terrifying species of dinosaurs like Indosuchus and Rajasaurus. We learn that the Indosuchus were group hunters. They had razor-sharp teeth, with the front teeth measuring 10 centimetres. Their skulls measure one metre in length. In the limestone beds of Ariyalur, their vertebrae have been found, says the author. I wonder if we ever construct a time machine, whether I would like to take a time safari to Tamil Nadu of the Cretaceous and Jurassic periods. Then there was the Titanosaurus, the largest herbivorous dinosaur of Cretaceous India.

All these are presented with a wonderful artistic reconstruction in life-like situations, unlike the boring reconstructions in black and white one sees, that too rarely in text books. The discovery of the topmost predator of the dinosaur era in India, Rajasaurus narmadensis, reads like a detective story.

The book is an exciting journey into the geological processes which make India what it is today. Here for example is what Indica says about the Ellora temple marvels: “Ellora’s spectacular temples and caves were carved from the dark-grey rocks that were piled up into a series of high plateau.

These rocks were made by massive lava flows known as the ‘Deccan Trap’ and their story takes us back some 68 million years to a critical juncture in Earth’s history.” We have all seen the Ellora cave temples with a sense of awe and wonder, with the knowledge of history and mythology, and now we will look at the grand geological processes which made the rocks suitable for that great artistic marvel.

This book is a wonderful work of love. It is also the lucid narration of her deep history which is integral in the course of the geological evolution of the planet. This is a book that will make you sensitive to the soil on which you are standing, the mountains around you, the stream that runs in your village. The book is rich in illustrations which are aesthetically pleasing—453 pages of well-printed delight. This is a work this generation can be proud of and a work on which subsequent generations should build. Buy it. Read it.

This is a book that can light that fire in the heart of the coming generations producing hundreds of Darwins and Vernadskys and Birbal Sahnis.