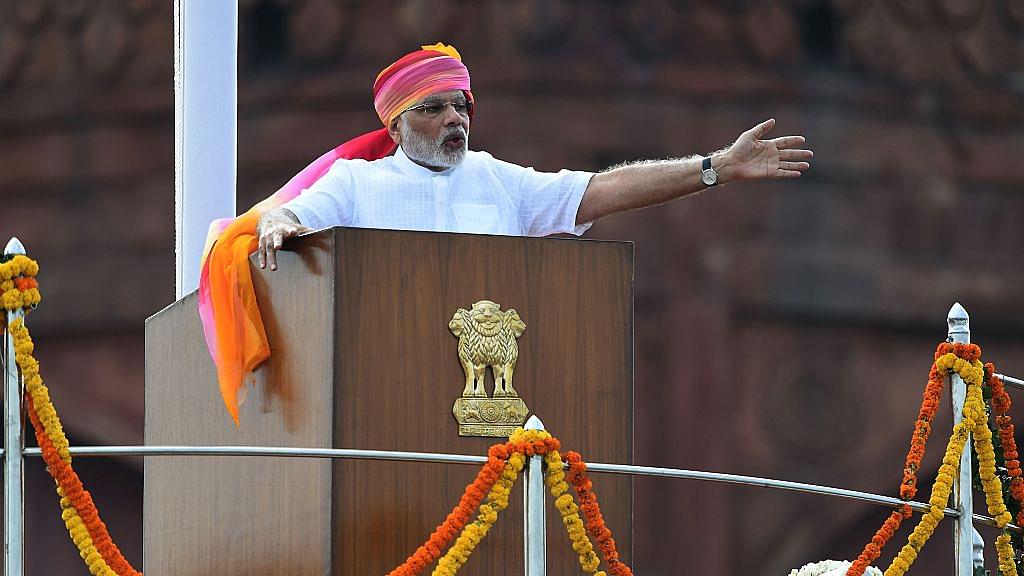 The title of this book will probably be best remembered for being tweaked by Finance Minister Arun Jaitley to deliver a broadside against his predecessors at the launch function. “India at 70, Modi at 3.5 and job applicant at 80,” he sneered at former finance minister Yashwant Sinha who had, a few days earlier, taunted Jaitley and torn into the government’s mishandling of the economy.

But, that apart, what’s with the title? Why juxtapose 70 years of India and three-and-a-half years of the Narendra Modi government? The editors of the volume – Bibek Debroy and Ashok Malik – say the book is an attempt to look at the Modi government’s actions in the larger perspective of nation building, which is a continuous process.

Modi’s overwhelming victory in the 2014 general elections, they say, was “more than a popular mandate, it was a cry from India’s heart, a call for profound change and decisive governance”, and that “on Modi fell the burden of realistically defining the next twenty years”.

And, no, there isn’t a separate chapter on demonetisation, though there are references to it in several essays, mostly to make the point about the fight against corruption, people’s buy-in of Modi’s ideas and how this is part of the Swachh Bharat movement. Swapan Dasgupta’s essay explains why Modi sprang demonetisation on an unsuspecting nation, saying this is part of his willingness to take risks.

Also missing is a chapter on the goods and services tax (GST), but that may be because it is too early and the book must have gone to the press just as the new indirect tax regime kicked in. Arvind Virmani’s chapter on tax reform, however, does list three challenges that the GST regime should address once it had stabilised.

The editors do admit that this does not cover every initiative – it cannot. But the absence of discussion on these two topics will be noticed.

The tone is set by the essays of Dasgupta and Anirban Ganguly, which set out Modi’s philosophy of and approach to governance. Ganguly talks about Modi’s governance model being citizen-centric and focussed on getting people involved in the process – a point various other essays also make. Two other recurring points that are made are about effective delivery, whether of welfare or infrastructure projects, and, as Shakti Sinha puts it in his essay, this government’s “ability to think big and audaciously”. Dasgupta also puts Modi’s governance model in a political context, which is welcome.

There can be little quarrel with the statement that Modi’s mandate represents a fundamental shift in voter expectations and that it put him in a position where he can shape the future of India and Indians. How far he has succeeded in doing that is what one would like to know as one starts reading this book.

The Editors’ Note says “this is not to suggest that the governance experience has been perfect and is beyond a critical look”. Disappointingly, few of the essays subject the Modi government to an honestly critical look. The Editors’ Note admits that “while there is broad appreciation, as is to be expected, writers make subjective calls on where they see shortcomings and scope for improvement. However, the overall trend remains decidedly positive.”

There’s a thin line between appreciation and admiration and many of the essays cross this. They’re not gushy, fortunately, but one would have expected more than the token references to ‘remaining challenges’, running through most of them. But a healthy dose of criticism need not detract from an overall positive tone, does it?

A case in point is the references to UDAY – the Ujjwal Discom Assurance Yojana – which has been touted as a radical departure from the earlier financial restructuring plans for discoms. In November, it will be two years old and its success is patchy. Just setting out where it has succeeded and where it has failed would not have been a negative perspective and one certainly would have expected essays by Vinayak Chatterjee and Sinha (who’s had experience in administering the power sector) to have dwelt at length on this. Both mention UDAY and about what’s left, but the treatment appears cursory, especially in Sinha’s chapter, which is about energy.

The sectoral essays that stand out are those of Kirk R Smith on the LPG initiative – especially the Ujjwala Yojana, which involves giving poor households using chulhas fired by biomass LPG connections – Chatterjee on infrastructure, Sanjeev Sanyal on urbanisation and Malik on health sector initiatives. Smith has been working in India since the seventies and has far more insight on the use of cooking fuels in rural India than many bureaucrats implementing the Ujjwala scheme. Sanyal’s essay provides an interesting perspective into the differences between the Indian and Singaporean approach to urban planning.

Modi’s “minimum government, maximum governance” slogan has often been mocked since there seems to be no lessening of government in the three-and-a-half years he has been in office. Debroy’s essay on the subject has a different take on the subject – pointing out that many areas where government may have not withdrawn from sufficiently are really in the domain of state governments. He sees the acceptance by the Modi government of the Fourteenth Finance Commission report as one element of reducing central government presence in many areas.

Some of his arguments in this chapter are unfair to those criticising the lack of minimum government; nobody, for example, wants the government to withdraw from providing public goods.

These quibbles apart, this book is an excellent compendium of the Modi government’s initiatives (though some essays do read like a textbook or government document). Don’t come to this book as a sceptic, looking for some trenchant criticism, you will be disappointed. Accept that it is all about Modi and read it for many interesting insights and great background on many issues in a succinct manner.