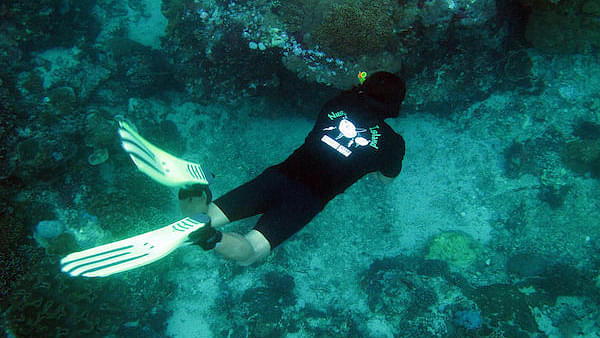 It has been said that despite the great mysteries that the universe out there holds, some of the most profound ones are within. Something similar could be said for our planet as well, divided as it is between land and water. Although some 71 percent of the earth is covered by water, most of us are intently and almost exclusively focused on the other 29 percent. Many of us do not know swimming and fewer still have done any diving. Even among those who can hold their head above water, most of the time spent is in indoor swimming pools and infrequently. This is unfortunate, for we are missing the amazing beauty and wonders the sea has to offer us.

Earliest records of diving go back to around 500 BCE when Greek soldiers supposedly used a bathysphere to approach an enemy ship from under water. Alexander is also supposed to have ordered the destruction of all the submarine defences of Tyre after the successful siege of the city in 332 BCE; legend has it that he himself joined the divers in a glass diving bell. The fantasy of underwater travel remained past the classical era. In his De Mirabili, circa 1250, the Franciscan friar Roger Bacon talks about machines that would allow men to walk on the seabed without harm to their bodies.

It was the Dutch inventor Cornelius Van Drebbel who built the first navigable submarine in 1620. There were several similar attempts to develop devices for individuals over the next couple of centuries— the most notable being of Henry Fleuss in 1878 and of Robert Davis in 1910— but the first device that enjoyed commercial success was invented by Jacques Cousteau and Emilie Gagnan in 1943. The era of modern recreational diving can be said to have begun in 1948 when Cousteau persuaded a sporting goods store owner, Rene Bussoz, to import some of his self-contained underwater breathing apparatus kits.

Bussoz imported 10 of them, and believed the market saturated, but as people realised that they could now dive without possessing a breath-hold diver’s stamina, more and more diving clubs and stores popped up.

In the 1950s, there was little training available for the diving enthusiast outside of the military and oceanographic institutes. As clubs and instruction schools popped up for aqua-lung divers— the term scuba caught on only in the mid-1960s— there arose a need to codify and certify the training.

Over the years, diving has become progressively safer. With more experience and improving materials technology, scuba diving is one of the safest sports one can engage in today. Over the years, millions of ordinary people worldwide have become certified divers though many have not remained active. One reason might be that scuba diving is not an inexpensive hobby; another is that it is not easy to find equally enthusiastic diving buddies.

To learn diving, one must be at least 10 years old, although there remain some restrictions until one is 15. There is the usual trash talk about which certification—NAUI, PADI, SSI, or other— is better, but there is very little difference between the syllabi of these various associations. What is most important, at least for the beginner, is the quality of your dive instructor. For what its worth, I will also mention that while PADI is the most popular certification internationally, astronauts at NASA and the U.S. Navy SEALs train with NAUI— you can guess which one I hold.

A typical dive training course lasts about 32 hours and is spread over two weekends, eight hours each on Saturday and Sunday. Four of these hours are spent in class while the other four are spent in a pool, familiarising you with the equipment, diving skills, safety, and maintenance. Most of the class time will be spent on revisiting secondary school science— buoyancy and the gas laws.

This is because the water pressure underwater affects the air you breathe and consequently your body chemistry. Every 30 feet, the pressure on your body increases by one atmosphere, so at 60 feet below water, you have three atmospheres pushing down on you. The two golden rules of diving are closely related to the effect of nitrogen and oxygen on your body under pressure: do not ascend too quickly, and do not hold your breath while scuba diving.Most dive instructors insist that you know swimming. However, the usefulness of this is mostly psychological— if something goes wrong when you are 50 feet below, the tendency to panic is higher if you do not know swimming. This almost always leads to a rapid ascent which could be dangerous. Were the diver able to remain calm, he would realise that the only thing he really needs— air— is right there on his back and there is no need to worry.

In fact, it is difficult to swim with your entire scuba gear because of the high buoyancy built into the kit— from the neoprene wetsuit to the buoyancy control device (BCD) and the tank of air, divers need to be weighed down to descend. Drowning while scuba diving is actually very difficult! Furthermore, a panicked diver inadvertently exerts himself more, consumes far more air, and cannot stay below for long even with a 80-cubic-foot tank. Theoretically, you can dive anywhere but you want to optimise your experience by choosing the areas with the best water clarity and the most diversity of flora and fauna. Jumping or rolling off a boat is the image we have of scuba diving but some spots allow divers to even walk into the water and wade deeper until descent.

For those in the Western hemisphere, there are several fantastic places such as Belize, Cozumel, Bonaire, and Cocos Island to name just a few. Those in the Old World should check out Lakshadweep, the Andaman & Nicobar Islands, the Red Sea, Thailand, Cambodia, Indonesia, and Malaysia.

Beginners should check that the sites they choose do not have strong currents or they would have an additional thing to keep track of on their first trip out. However, currents are nothing to be afraid of— more experienced divers just allow themselves to be pushed along and exert themselves very little as they enjoy the corals and fish.The fun really starts once you are familiar with basic diving and have received your Basic Open Water Diving Certificate, for there are several additional skills you can be certified for. For example, you can learn underwater photography and videography, night diving, cave diving, wreck diving, nitrox, and other niche skills depending upon your interest.

The typical scuba kit consists of a wetsuit, boots, flippers, mask, snorkel, BCD, dive belt, weights, dive computer, and regulator; oxygen tanks are provided by dive operators at the dive spot. Most serious divers begin by renting their kit and then slowly acquiring their own equipment as they learn more about their needs and gain more experience. For those with glasses, masks can be made to specification so that contacts and spectacles are not needed. Some sites may require flashlights, flags, dry suit, noisemakers, and other equipment but you will learn about those quickly as you start diving.

My first dive was at Cozumel. The first time I put my head below the water, a wave of tranquility washed over me. Suddenly, I was cut off from all sounds around me and left in total silence, save the Darth Vader-esque sound the regulator makes as you breathe. The water was cool and clear, and the tranquility I felt was not that of a solitary person but one who was for the first time fully integrated with the world around him. The experience was truly meditative and I stayed below for 55 minutes, not bad for a beginner, according to my instructor. There are few things I have done in my life that I could recommend more. So look up your nearest dive school and get out and under. And if you do choose to get certified, look me up for I am always in need of a dive buddy!