What The Tamil Millennial Wants 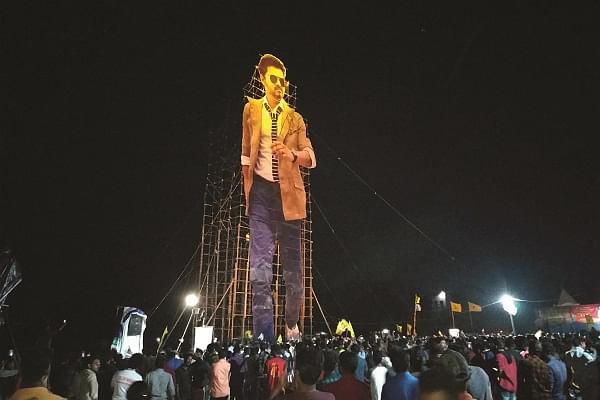 The ‘Millennial Tamil’ yearns for an Anniyan.

There’s a popular Tamil movie, Anniyan (Stranger), which released in 2005. Allow this writer to indulge in a little neologism at the outset – the ‘Millennial Tamil’ – a generic term to define the post-2000 pop culture-fed Tamil youth. Like all generics, this is bound to have its exceptions.

Back to Anniyan. The movie perhaps symbolises the Millennial Tamil psyche more aptly than any other, in more ways than one. In the film, the protagonist is a weak, unmanly, stickler-for-rules Brahmin lawyer (ah, the good old Brahmin weakling stereotype) who gets enraged at the slightest hint of apathy. He works his anger up to a lather and as a good consumer rights lawyer should, drags sundry offenders to court. But the offenders always get away by hook or crook (the ‘system’ is always evil). The timid Brahmin lawyer is but an impotent twig – how can he fight a well-oiled system where there are leeches at every twist and turn?

In comes a grim-reaper based character called ‘Anniyan’. He is another personality that springs forth from the protagonist who’s a multiple personality disorder patient. All the apathy that the weak, rules-following lawyer fails to address, Anniyan addresses by dispensing punishments prescribed in the Garuda Purana to the corrupt and debauched. While some offenders would be fried in oil, some others would be devoured by leeches. Unlike the impotent lawyer, Anniyan doesn’t have patience for a crooked justice system; he is Justice incarnate.

This simplistic plot that tries hard to come across as a sophisticated ‘psychological thriller’ is a good metaphor for the Millennial Tamil and the assorted complexes that reside in him. The Millennial Tamil sees decadence, negligence and corruption devour everything around him while he watches on helplessly. He is convinced that almost everyone in positions of power is part of a grand conspiracy that only seeks to deepen this decadence.

Being brought up on a staple diet of larger-than-life heroes who, in borderline communist archetypal roles, always take on the corrupt rich and deliver instant justice to the poor, the Millennial Tamil yearns for an Anniyan, in fact he wishes he can be one himself. Now, social networks have given him a shot at it.

Dravidianist politics, through its purging from the public sphere of all that’s sacral, left behind a gaping hole, a sort of nihilism that was waiting to find a purpose. Where there’s such a vacuum, cynics cannot be far behind. A plethora of forces like evangelists, Leftists, Dravidianists and lately even Islamists joined hands to fill this vacuum with a deadly cocktail of borderline racist, anti-Hindu, neo-Luddite, obsessively conspiratorial, victim-victor complex.

They drive the Millennial Tamil, they give him a purpose and these purposes are fulfilling ones in themselves. At times, the fight is to save Jallikattu from the evil ‘Aryan’ courts and PETA, and at other times it is the noble quest of erasing Hindi alphabets from national highway milestones – all high-minded pursuits that fight a good fight against the Brahminical Indian government.

One such episode that gathered eyeballs was the farmer protest at Jantar Mantar in the first half of 2017. His movies have taught the Millennial Tamil that farmers are always right. This message was reinforced when some actors from the Tamil industry showed up at the protest site. So, it is obvious that the Millennial Tamil sees the whole world starting from neighbouring Karnataka to Delhi’s Modi and even America’s Trump as conspirators against the Tamil farmer.

Questions like whether agriculture is a state subject or something for Narendra Modi to look at, did not matter. Facebook memes could not and cannot be bothered about mere technicalities once Modi has been marked as the target. Cynical manipulators had already managed to turn the Jallikattu protest into an anti-Modi event towards its end. They conveniently did not pass the memo to the protesters that said that the Modi government had issued a pro-Jallikattu ordinance earlier which was stayed by the Supreme Court.

That poor farmers who were unable to even make ends meet came all the way to Delhi to ask for a loan waiver which the state government can provide did not hit the conspiracy antennae of the otherwise conspiratorial Millennial Tamil. It did not occur to him as intriguing that Islamists from the Tamil Nadu Tauheed Jamaat, who had nothing to do with Jallikattu, had infiltrated the protests at Marina. There were unverified reports of at least one Islamist, who had nothing to do with agriculture, being present even at the farmer protest. But who cares? The movies have told the Millennial Tamil that eating a good biryani is the ultimate triumph, Islamism be blessed.

Every development project beginning from Kudankulam to the Neutrino Observatory, from the GAIL pipeline to the Hydrocarbon Extraction project, is an imperialist endeavour of the Brahminical Indian state that wants to encroach Tamil lands, kill Tamil farmers and subdue Tamil pride – the unsuspecting, neo-Luddite Millennial Tamil is convinced of this. This is an interestingly ironical phenomenon where ‘Breaking India’ forces have taken to technology to disseminate neo-Luddite, pseudo-scientific drivel that is readily consumed by technologically enabled but simple-minded pawns. It did not even occur to them that the farmer protests at Jantar Mantar magically ended just as the MCD elections concluded. Surely, they could not be connected.

A cursory look at the Pradhan Mantri Fasal Bima Yojana (PMFBY) numbers tells us a story of stark indifference in the Tamil Nadu state government’s attitude towards insurance coverage for farming. For Kharif 2016, a total of 3.9 crore farmers were insured by PMFBY nationwide, with the ‘imperialist’ Indian government chipping in with a subsidy in premiums. The grand number of farmers of Tamil Nadu within this 3.9 crore was 16056! However, it must be Modi’s fault that he did not go to farmer homes and get them to fill insurance forms. Facts are a Brahminical conspiracy.

From financial inclusion for credit access to insurance coverage for even extremely localized crop failures, from e-NAMs (e-marketplaces for farmers) to a renewed emphasis on irrigation and water management, it can be said that agriculture has been at the very centre of the Narendra Modi-led government’s focus . But the poor Millennial Tamil has been repeatedly told that Modi is evil incarnate and will sell off Tamil farmer lands to Hindi businessmen. A lie, repeated often enough, must be true.

The Tamil country saw some of the peaks of Hindu civilisation and high culture. It still houses large number of lay folk with a deep sense of culture and devotion, but their traditional structures are panting for breath, systematically being suffocated by an actively antipathic state and a coalition of anti-Hindu forces.

Tamil pride is no more a by-product of contemporary civilisational achievement. It has become a public pastime where atavistic flights of fancy are constantly innovated and Brahmins are to be denigrated as a ritual towards cementing pride. And this version of Tamil pride is so ambiguous in its definition that it could mean almost anything – even the victory of the Chennai Super Kings, a team led by a fervently worshipped ‘Aryan’ captain, consisting of more ‘Aryans’ and foreign players, with only a few locals.

The Dravidianist hollowing out of the pop culture of Tamil Nadu of sacral myths provided the avenue for secular myth-making. This made movies the staple opiate of the masses with larger-than-life heroes bringing instant justice and saving Tamil pride. Within the space of one song a poor hero would be a rich man traveling in a ten-car cavalcade.

Demands that a ‘permanent solution’ should be found to the issues of farmers who were protesting at the Jantar Mantar, that river inter-linking must happen instantly or that getting Karnataka to release water would solve farming problems, were but a manifestation of the craving for instant justice and everlasting solutions that hundreds of simplistic movies like Anniyan have ignited in the naive populace. But a shallow medium seldom creates a great society. It has infused mediocrity into every area of public life where rhetoric is an end in itself, slogans are intellectualism and Facebook memes are research.

No wonder then that the Millennial Tamil thinks kitsch is cool and complexity is a conspiracy.

An earlier version of this piece was published as 'The Tamil Millennial Is The Microcosm Of Tamil Decay' in 2017 here.