When Victimhood Is The New Honour 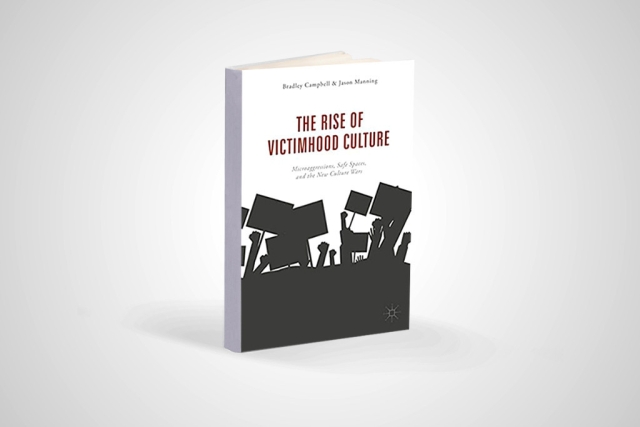 Calling this book courageous is an understatement, which no doubt the book is, but more than that, it as an experiment outside prevailing discourses. Identifying the symptoms of the illness of contemporary times and naming them is no mean task and the authors announce the beginning of a possible wave of writing that is not debilitated by political correctness and academic dishonesty. The freshness of the narrative is infectious, factual details and illustrations unignorable, and the theoretical foundation substantive, which together contribute to a powerful statement such as the present book that is so very real, yet rare. Bradley Campbell and Jason Manning will be remembered as prophets of this new wave for long.

Microaggressions And What They Mean

The book introduces us to the rise of a culture in the US, where aggression and oppression are imagined as pervasive. But unlike the periods gone by, the present time is characterised by a climate, where aggression by the privileged is subtle and almost invisible, which devalues the culturally different. In most cases though, such acts are unintended or are casual remarks that may communicate some sort of slight or insult. The proponents of victimhood culture believe that such behaviour betrays the power of one group over another and that is precisely the essence of microaggression – its invisibility to the perpetrator. Examples can be as innocuous an observation as ‘you are so articulate’ (addressed to a non-English speaking person) or ‘where are you from’ (to a coloured person), staring at gays and lesbians expressing affection in public or even complimenting a woman’s shoe. All these confine the receivers/targets to their place of origin, limit them to their race/ethnicity/gender and do not allow them to transcend those barriers.

Yet ironically, on other occasions these sites (such as race) are projected as the foundation of one’s being and offer a reason for affirmative action. Moreover, yesteryears’ normal is today’s deviation, that is to say, being White or heterosexual or English speaking is seen as the problem today. This leads to a scenario, where everything uttered has the potential to offend somebody. In conservative circles, such victims and their advocates are seen as cry bullies – bullies masquerading as babies, aggressors as victims, and elites as subalterns. The whole institutional and popular cultural complex such as media contributes and subscribes to this thinking. Not surprisingly, such mentality often gets bolstered and theoretically justified by the socially-conscious university professors and students, and in the process subverts the very foundation on which such attitude finds justification, ie constitutional democracy.

Thus, such mentality is a deeply flawed and contradictory enterprise, promoting ideas while dismantling the foundation, which legitimates those ideas.

Quite predictably, large sections of media often fuel anti-democratic mentality and create a doomsday scenario for America following Donald Trump’s victory (as in the slogan ‘Not My President’). This is not unlike a flurry of news reports about violence against minorities that included alleged rapes of nuns and vandalisation of church property after Narendra Modi came to power in India’s parliamentary elections. In most cases, they were found to be false or had nothing to do with the party in power. Maybe this victimhood culture reflects the absence of real problems (poverty, illiteracy, ethnic violence, warfare, etc) and hence the need for the invention of imaginary problems that can contain people with power and privilege. Since modern democracies have created all possible institutions to address the real problems, universities and such spaces have found their relevance in pseudo problems like microaggression.

Microaggression, the authors tell us, is a moralistic behaviour, an act of defining right and wrong, and a holier than thou attitude. This is reported mostly from a “culture of victimhood in which individuals and groups display a high sensitivity to slight, have a tendency to handle conflicts through complaints to authorities and other third parties, and seek to cultivate an image of being victims who deserve assistance”. This is reflective of the contemporary culture and differs from two earlier modes of thinking: cultures of honour and cultures of dignity. In the former, people are sensitive to being snubbed and are reactive to insult; being a victim does not invite sympathy. In the latter, people have moved away from what they believe are the relics of honour culture, prefer to ignore insults or choose to address them in a mature and non-hysterical way. The victimhood culture pits itself against the culture of dignity by exaggerating microaggressions.

In honour cultures, reputation is non-negotiable and it is cowardice not to respond to insults; in fact it may be seen as moral failing. This culture thrives in places where legal authority is weak or nonexistent. As state authority expands and the rule of law is enforced, honour culture makes way for culture of dignity. The authors, however, warn us that honour culture still survives in most of the Arab world and some pockets in the West. However, the prevailing culture in Western democracies is that of dignity; people are less touchy and are willing to shrug off minor insults. In the event of conflicts, such cultures prefer nonviolent actions such as talk, negotiation and compromise; here toleration or even a thick skin are seen as social virtues.

Everything changes the moment we encounter the victimhood culture, which is characterised by the perceived and exaggerated feeling of inequality and marginality, to be seen in microaggressions directed at the culturally different. This culture does not believe in ignoring insults; rather encourages its visibility for public sympathy and action. It rejects the dignity culture’s division of physical violence from verbal ones, and thus partially resembles honour culture. But when honour culture recommends direct confrontation rather than crying for help, the latter thrives on telling the whole world. In honour culture, victimhood is not to be exhibited, but negated through direct action by making the aggressor pay for it, in direct physical confrontation or through invite to a duel. While being similar to honour culture in being sensitive to insult, victimhood culture also resembles dignity culture in its willingness to appeal to authorities. Yet, it differs from both in highlighting rather than downplaying the complainant’s victimhood.

The ubiquity of this culture is most visible in universities, the most diverse of spaces and most prone to encounters of cultural difference and misunderstanding. Even corporate houses have started following university models in initiating awareness programmes to avoid hurting others and also in providing safe spaces, where victims can be counselled and de-traumatised. Surprising or even laughable as it may sound, there is an unending expansion of phrases in capturing novel ways of being hurt as in ‘sweat shaming’ (like ‘slut shaming’) or cultural appropriation when an event to celebrate a different culture can be misunderstood as its co-option. This is accompanied by an appeal to authorities and public at large not just to take action but also to publicise the incident and create a wave of invisible sympathisers.

At times, universities come under pressure from student groups and cancel events to preempt any unpleasant situation (as when DePaul University cancelled Ben Shapiro from speaking or when in Yale, or when a couple of professors were forced to resign when they sought to regulate offensive Halloween costumes). It should not surprise us that these demands are made by those who often stand for freedom of speech. Close parallels can be found in India when filmmaker Vivek Agnihotri was attacked in Jadavpur University or when Anupam Kher was denied permission to screen his movie at Jawaharla Nehru University. Some sort of moral status is ascribed to suffering and victimisation in select cases. The authors, however, do not highlight how the privileged students and faculty appropriate victims’ experience and articulate them to further their interests.

Here victimhood is a status, because it is some sort of capital (like Bourdieu’s cultural capital), which can be exchanged for sympathy and thus is advantageous to the victims and their spokespersons. Victimhood thus is both reward and punishment and there lies the contradiction. As the authors argue, “the same progressive activists who campaign against microaggressions might also call for the banning of conservative speakers... where progressive ideas can go unchallenged”. Thus the demand for diversity and its celebration leads to homogeneity, where everything undesirable can be banished. The authors tell us how universities in the US are producing one-dimensional understanding of diversity and toleration, and how only 12 per cent of professors declare themselves to be politically conservative. This is not much different in India.

The Book’s Universality And What Is Unsaid

A striking feature of the book is its transferability from being an indictment of contemporary American academic culture to being a reference point to understand the ways of our politically-conscious world, more pronounced in post-industrial democracies. As a framework, the book can neatly fit into the contemporary Indian context and may appear as an elegy written on India’s present academic/intellectual environment. Thus, the book is as much about India as about America, as universal as it is particular, and as reflective of academic climate as social and political moralities. The timing of the book could not have been more appropriate, when the politically-conscious academic world imagines itself as endangered at the time of Trump and fancies itself as the last hope for mankind. Interestingly, the sense of vulnerability is matched by a saviour-like zeal combined with inexplicable aggression, something that is pitted against the perceived ubiquitous microaggressions of the socially conservative.

Maybe the authors could have engaged a little more with other such political spaces (in Europe or India) to see if the global intellectual order is going through some sort of crisis or how this culture of victimhood reworks the earlier culture of honour and its penchant for confrontation. Similarly, the expression ‘culture of victimhood’ is an ascribed category, but the advocates of this culture may see themselves as fighters for dignity, as in Taylor’s telling phrase ‘politics of recognition’ (something which the authors did not engage with). Too many illustrations from American campuses, while substantiating the argument, limit the strength of the book as a template. Another issue that could have been dealt with is a proper historicisation of the shift from honour to victimhood and the socio-economic conditions that created them. Though touched upon in the text, the authors did not engage with the academic elites and their tutelage of the new generation victims; that is to say, the constructed nature of such culture. Also, the distinction between the subalterns (experiential) and their spokespersons (representational) has not been brought out clearly.

However, it is understood that the authors are primarily concerned about an American problem in its contemporary manifestations and the possible social meanings they convey. The ‘unsaid’ part of the book is not due to the poverty of the thesis or the authors’ inability to make a convincing case, but because of the present reviewer’s expectations for a meta narrative. Regardless of its American contours, when the authors speak of competitive victimhood, or scholarship as activism, or teaching as indoctrination, they ring a bell and echo the hidden transcripts of Indian universities. Fortunately, the book ends with a note of hope that heterodoxy in opinions will make a comeback, and that the future will not be like the present.