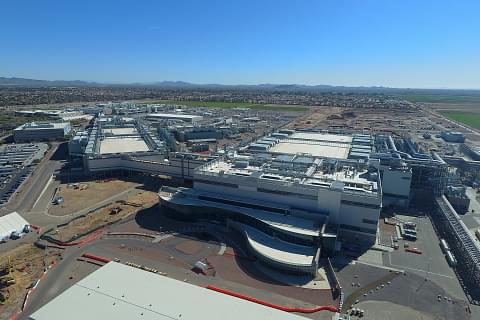 Intel CEO Pat Gelsinger on Tuesday (23 March) announced expansion of the company’s semiconductor manufacturing capacity through two new fabrication factories in Arizona that will be set up at a cost of $20bn.

The news comes amidst a global chip shortage that has curtailed production targets in industries ranging from automobiles to electronics and concerns that the US is falling behind in semiconductor manufacturing.

“Intel is the only company with the depth and breadth of software, silicon and platforms, packaging, and process with at-scale manufacturing that the customers can depend on for their next-generation innovations," Gelsinger said in a blog post.

"IDM 2.0 is an elegant strategy that only Intel can deliver – and it’s a winning formula,” he added.

Gelsinger also unveiled company's first 7nm chip, the long-delayed Meteor Lake, which will have its design finalized in the second quarter of this year.

Intel also announced that it will build a “foundry” unit that will manufacture chips for third party, “fabless” designers.

Intel said its foundry division will be called Intel Foundry Services and will be led by Randhir Thakur, currently a senior vice president in the company.

The announcement comes as a clear signal that Intel will continue to focus on manufacturing despite recent setbacks, especially its struggles with producing 7-nanometer chips.

In December 2020, activist hedge fund Third Point LLC, which holds $1bn stake in the company, called for the American chip-maker to explore strategic alternatives, including whether it should keep chip design and production under one roof.

The hedge fund had asked Intel to evaluate strategic alternatives, including whether it should remain an integrated device manufacturer and the potential divestment of failed acquisitions.

Intel currently operates four factories, called “wafer fabs,” in the United States. In addition to its site in Arizona, which is being expanded, it also has fabs in Massachusetts, New Mexico and Oregon. It also makes chips in Ireland, Israel and has a single fab in China.

On 24 February this year, President Joe Biden signed an executive order mandating a review of supply chains of critical goods, products and services to reduce dependence on China and other rivals.

Biden also has indicated that boosting domestic semiconductor manufacturing is a priority for his administration. His administration hopes to fix ongoing chip shortages and address lawmaker concerns that outsourcing chipmaking had made the US more vulnerable to supply chain disruptions.