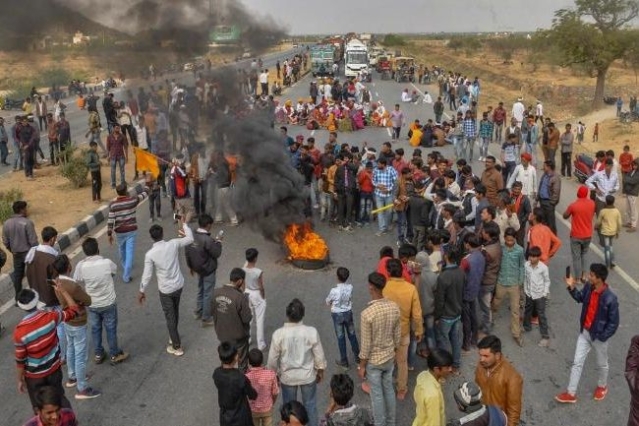 The Gujjar leaders participating in the agitation for quota in Rajasthan have said that if their demands are not met, they will organise a statewide 'chakka jam' (a large scale agitation) in November.

The announcement was made in a mahapanchayat held as a "shakti pradarshan" — show of strength — in Bharatpur under the ongoing agitation.

The agitation is being spearheaded by Gujjar leader Kirori Singh Bainsla under the Gujjar Aarakshan Sangharsh Samiti for demanding education and jobs for the Gujjars, as MBC (most backward class), among others.

The leaders have said that if the government does not make provisions for it, the agitation will take a massive turn in November.

His son Vijay Singh Bainsla has said that there was nothing substantial in what the government officials have spoken to them. He added that he had told the government that they don't want any meeting with them, but want their demands met.

Last month, Bainsla had said that he would revive the quota agitation.

His demand: constitutional protection to 5 per cent reservation for five most backward classes including Gujjars (from the previous 1 per cent provisioned by Vasundhara Raje-led BJP government in the state) in Rajasthan by including the relevant legislation in the ninth schedule of the Constitution.

The leaders have demanded recruitment to the 35,000 posts which are in the backlog of the people of the community.

He has said that if the demands are not met, they will sit on the railway tracks and ensure that all services including rails and transport are stopped in the state. The ultimatum to the Ashok Gehlot-led Congress government is of 1 November.

Sections of the media have reported that there was a "sudden change" in the venue of the mahapanchayat.

Earlier, it was to take place at Maksudanpura Devnarayan Temple in Malarna Dungar but was later shifted to Bayana.

The sudden change in the mahapanchayat venue upset some leaders from the community. A leader from the community, Himmat Singh Gujjar, claimed that Colonel Bainsla was ignoring "senior Gujjar leaders to promote his own son."

He has been quoted as saying: "In the last 13 years of our quota agitation, it has never happened that the venue of the mahapanchayat has been changed after it has been announced. In his bid to promote his son as a leader, Col Bainsla is now hatching conspiracies to make people forget the struggles and sacrifices that other Gujjar leaders have made in the past and this will weaken the entire agitation."

The mahapanchayat held as a show of strength is said to be a precursor to fresh agitations. In 2018, former Rajasthan chief minister Vasundhara Raje had to face the anger from the community over their demands, and the issue of reservations.