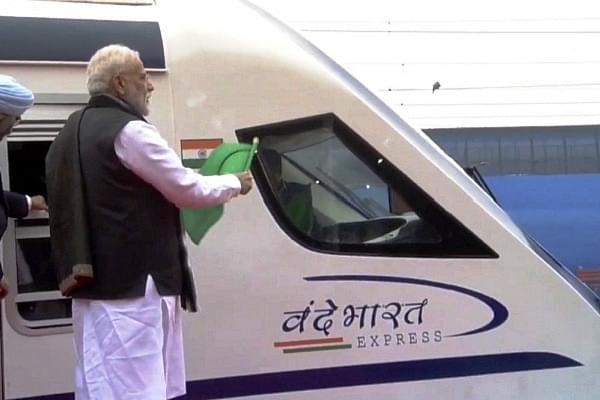 Heralding a new era of modern rail service in the country, Prime Minister Narendra Modi on Sunday announced 75 Vande Bharat trains that would be made operational to connect different parts of the country in 75 weeks to mark the 'Azadi ka Amrit Mahotsav' being observed by the nation.

Addressing the nation on the occasion of Independence Day from Red Fort, Modi highlighted the Kisan Rail service being launched for the benefit of farmers across the country.

With rapid electrification drive along with the increased use of new and renewable energy like solar, wind and hydrogen power, the Prime Minister also declared that Indian Railways will become a Net Zero Carbon Emitter by 2030.

Besides, Modi also announced from the ramparts of the Red Fort in the national capital that all Northeast states would be connected by Rajdhani Express, the premier service of Indian Railways.

On the Vande Bharat Express, the modern train with a capacity to run at a maximum speed of 180 kmph, Modi said, "In 75 weeks of the Azadi ka Amrit Mahotsav, 75 Vande Bharat trains will connect different parts of the country," which means the modern trains could be delivered by 2023.

The announcement of 75 Vande Bharat trains points towards the importance of Trainsets that Indian Railways would now focus to
replace the existing loco-hauled trains with the distributed power rolling stock.

The future is Trainsets as the distributed power rolling stocks have replaced loco-hauled trains world over.

Since Trainsets have better acceleration and deceleration rates than the loco-hauled trains, operation of 180-kmph Vande Bharat trains would result in reduction of travel time in long distant journeys.

Vande Bharat trains are equipped with modern amenities and better riding comforts. The Railways has already finalised the tender for procurement of Vande Bharat trains and awarded Hyderabad-based Medha Servo Drives a Rs 2,211-crore contract for designing and manufacturing propulsion, control and other equipment required for making 44 rakes of Vande Bharat-type train sets.

With the announcement, the Railways has to execute the contract with speed to meet the timeline.