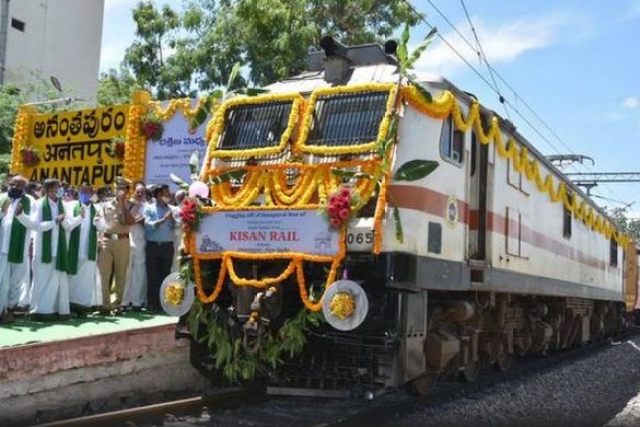 In a positive development, the third Kisan Rail, an exclusive freight train shipping farm produce to markets in various states, chugged off from Anantapur in Andhra Pradesh and set off to New Delhi on Wednesday (21 October), reports Zee News.

As per the report, the train is carrying over 242 tonnes of fresh fruits and vegetables from the Rayalaseema region.

Notably, the development comes just a month after the second Kisan Rail, and first in South India, was launched from Anantapur on 9 September.

In a press release issued by South Central Railway (SCR) chief public relations officer Ch Rakesh, this was the first Kisan Rail in which the farmers and traders availed themselves of a 50 percent concession on freight charge under Operation Greens.

"To further encourage farmers to utilise this railway facility, the Ministry of Food Processing Industries has recently announced extending 50 per cent tariff concession on the transportation of notified fruits and vegetables through Kisan Rail trains, under 'Operation Greens - TOP to total'," he said.

Encouraging Anantapur district farmers, the railway zone opened parcel loading at Mulakalacheruvu railway station, from where two parcel vans were loaded with tomatoes for the first time to Nagpur.

Likewise, the district farmers have loaded 201 tonnes of fruits and vegetables in 10 parcel vans from Anantapur station. Of the 12 parcel vans, eight were destined to Adarsh Nagar in New Delhi and two to Nagpur.

Nagpur is 882 km north of Anantapur while New Delhi is roughly 2,000 km north of the Rayalaseema town. Musk melons, lemons, oranges and sweet limes were loaded in the vans.

Kisan Rail is the brainchild of the Central Government aimed at boosting the income of farmers by providing a hassle-free transportation service to market the agriculture sector.

Railway officials adviced farmers to take advantage of 'Operation Greens - TOP to total' to transport and market their wares.

These trains are enabling farmers to ship their produce to places where there are markets to buy their wares.