Unravelling The Mystery: Here’s Why The Sun’s Surrounding Has A Higher Temperature Than Its Surface 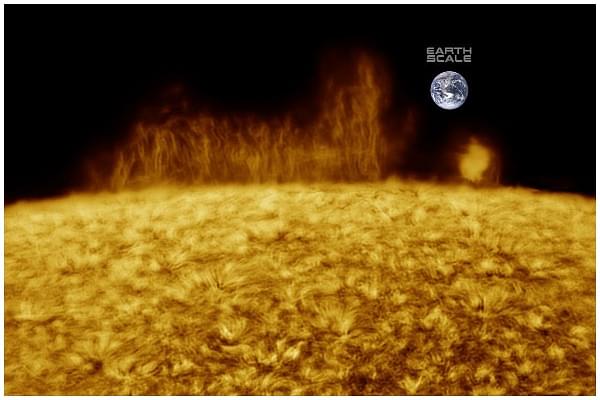 A recently published research paper in the journal Science written by an international team of researchers including Tanmoy Samant of Peking University, Beijing and Dipankar Banerjee of Indian Institute of Astrophysics, Bengaluru, is a big step towards solving the mystery of the sun’s surface and atmospheric temperature.

Now, one would expect that the temperature, as we move away from photosphere into the space, would decrease. This is not the case, however.

Turns out, the corona, which stretches over several million kilometres from the surface of the Sun, has a higher temperature than the photosphere, reaching a value of about one million degree Celsius or more.

This poses a bit of a puzzle. As we move away from the source of heat, the temperature normally falls. Unless, there is some source of energy that transports heat to the outer layer.

The earth too experiences a similar temperature anomaly, where the temperature decreases as we go up, but then increases from 20 km to 32 km in the stratosphere.

What heats up the corona

The source of the higher temperature of corona are solar spicules. They provide good amount of energy for the heating of the upper atmosphere of the sun.

Solar spicules are like giant spears of plasma that blast out of the sun’s surface like a geyser-jet. They are about 500 km wide and reach the height of 3,000 to 10,000 km over the sun's surface.

These giant ejections of plasma move up to 145,00 km per hour (around 4 km per second) as they travel from the photosphere to the corona, and usually disappear within 10 minutes. At a given point in time, a few millions spicules exist on the sun’s surface.

Since their life-span is short, it is hard to study the spicules and the cause of their origin. This is where the recent research paper comes up.

“This is a high-precision instrument and can measure magnetic fields with high sensitivity,” Dipankar Banerjee was quoted as saying by The Hindu.

Simultaneous observations form the Atmospheric Imaging Assembly in NASA’s Solar Dynamic Observatory spacecraft were used to match with the results.

The researchers observed that a solar spicule is formed at the site of "annihilation" of magnetic fluxes - the place where oppositely charged magnetic field lines coming out of the sun's surface, crashed into each other and disappeared.

"Our new results prove that spicules are formed because of flux cancellation at the lower atmosphere,” Banerjee told livescience.com.

Unlike earth, which has two magnetic poles, the sun sees magnetic field lines that are more dynamic - constantly rising, falling, twisting and snapping onto each other - thanks to the constant convection of material within the sun.

"One should note that these are small-scale and rapid evolutions of magnetic fields on the sun," Banerjee said, adding that they should not be confused with the long-term evolution of the sun's magnetic field, known as the 11-year solar cycle.

The researchers made observation that the spicules made of plasma – a mixture of positive ions and negatively charged electrons – heat up while propagating upward, reaching the coronal temperature. The radiation released by coronal plasma lies in the extreme ultraviolet of the spectrum.

The researchers noted that solar spicules might be an important cog in "a complete mass cycling process between the chromosphere and the corona," They could even have a role in fuelling the solar wind. the stream of high-energy charged particles ejected by the corona that can have significant affect on the earth’s satellites.