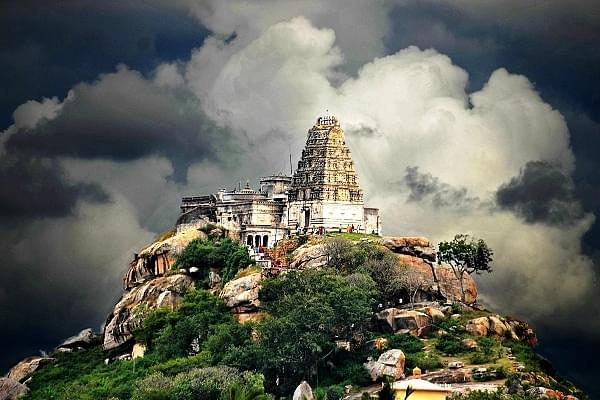 Melukote in Mandya district of Karnataka is one of the most sacred places in the state. Located on the banks of the river Akhandakaveri, it is a Vaishnavite Kshetram - also known as Thirunarayanapuram.

Built on rocky hills of Yadugiri (also known as Yaadavagiri and Yadushailadeepa), overlooking the Kaveri valley, the place was a home for Srivaishnava saint Ramanujacharya for over 12 years.

With its majestic Cheluvanarayana Swamy Temple, Academy of Sanskrit Research and many other important shrines, along with the reputation as a centre of ancient learning, it is hard to believe that Melukote doesn’t celebrate Deepawali.

The Tragedy Which Befell Mandyam Iyengars

As the region became a prominent centre of Srivaishnavism as well as learning, large numbers of Iyengar Brahmins from Tamil Nadu (the birthplace of Ramanujacharya) migrated and settled in the region, forming the Mandyam Iyengar community.

On Naraka Chaturdashi In 1790, Tipu Sultan massacred more than 700 Mandyam Iyengar families in Melukote, including women and children. They had congregated at Narashimhaswamy temple on the banks of Cauvery at Srirangaptna town to celebrate Diwali when Sultan’s army massacred them.

This mass butchering by Tipu's army forced Mandyam Iyengars to move to Nagamangala and later settle down in Melukute from Baburayana Koppalu, Mandya Koppal and Mandya.

The town, to this day, doesn’t celebrate Diwali, and mourns the death and destruction that Tipu Sultan wrecked over the holy town over two centuries ago.

Melukote provides a sombre example of people’s history - while the historians and intellectuals may forget- the people of the town maintain the remembrance of the horror of Naraka Chaturdashi in 1790.

The Melukote massacre is one of the examples Tipu’s detractors have given of his bigotry against non-Muslims, pointing to his brutal subjugation through, not just violence, but also conversions by forced circumcision, temple breaking, rape and plunder.

In his defence, Tipu’s supporters argue that while he carried out brutal massacres of Hindus and Christians, he was not a bigot. They give examples of his grants for rebuilding the Shringeri Math and other temples, employing some Hindus at high positions in his administration, as well as the coin with the Sharda icon.

The defenders of Tipu forget the difference between exception and the rule, and goals and final actions limited by practicalities.

As the rulers of a large Hindu population, the Muslim rulers faced practical limitations is how much religious agenda they could push at a given time without endangering their rule in the long term.

One must also remember that Tipu was the son of Hyder Ali - who was in the military service of Wodeyars. While Haider became de facto ruler in 1761 and Tipu finally declared himself a Badshah in 1780 and struck coins, the Wodeyar family commanded significant respect of the people.

Tipu’s situation was very different from that of the Muslim rulers in Delhi who had captured the city by force after vanquishing the native rulers in the battlefield.

The continuity in Tipu’s case required him to pay more heed to the existing loci of power in a pre-dominantly Hindu society. Like his father, Tipu, by endowments to temples and coins with Hindu iconography, was claiming continuity from the great Vijayanagara Empire’s Krishnadevaraya, by emulating him.

Tipu attempted to build an image in the eyes of his Hindu subjects that he was not a disloyal backstabber who usurped the throne from legitimate Wodeyars, but an upholder of the royal traditions that had continued from the times of Vijayanagara. It is for such attempts that Tipu is often called a “master of propaganda”.

That the acts of Tipu were largely ostentatious, arising out of political necessity, rather than an expression of genuine tolerance is made clear by his own proclamations of hatred against the Kafirs and the religious goal of spreading Islam through Jihad - both thoroughly incompatible with tolerance of Hindus and Hinduism.

Describing the killing, torture and conversion through forced circumcision of Kodavas, Tipu writes to the Nawab of Kurnool,“..we raised them to the honour of Islam, and incorporated them into our Ahmedy corps.”

In another letter to the Governor of Bekal Budruz Zuman Khan, Tipu says:

"Don't you know I have achieved a great victory recently in Malabar and over four lakh Hindus were converted to Islam? I am determined to march against that cursed Raman Nair (Raja of Travancore) very soon. Since I am overjoyed at the prospect of converting him and his subjects to Islam, I have happily abandoned the idea of going back to Srirangapatanam now."

While the letter from the Shrigeri Math to Tipu requesting money for rebuilding the Math is much publicised, very few would know about the letter Tipu sent to a Muslim cleric passing orders for a temple to be destroyed just because it was standing in front of a Dargah!

Many a supporters of Tipu say that the British writings on Tipu are circumspect as they were a sworn-enemy of the former. However, even French, who were Tipu’s allies, noted his cruel treatment of the Hindus.

A French soldier who fought for Tipu wrote in his diary entry in 1799, "I'm disturbed by Tipu Sultan's treatment of these most gentle souls, the Hindus. During the siege of Mangalore, Tipu's soldiers daily exposed the heads of many innocent Brahmins within sight from the fort for the Zamorin and his Hindu followers to see."

In the words of C Hayavadana Rao, Tipu's "religious fanaticism and the excesses committed in the name of religion, both in Mysore and in the provinces, stand condemned for all time. His bigotry, indeed, was so great that it precluded all ideas of toleration".

Justifying Tipu's actions as the order of the times would be unfair, as it gives an impression that all other kings placed a similar emphasis on propagation of their religion as a routine matter of state policy and used similar techniques to convert people.

Most importantly, whether it was the order of the day or not- a historical question- is completely irrelevant to the question of the actions being morally reprehensible and condemnable.

The fact that Tipu employed some Hindus in his administration isn’t a sufficient proof of his toleration of Hindus. After all, the British Raj in India hired many Indians and the US war in Vietnam was supported by many Vietnamese. Historically, support of some members of the persecuted group towards the oppressor is more of a rule than an exception.

This support, despite latter’s bigotry, can be due several reasons. Want of personal gains - money and prestige, an attempt to escape persecution, a lack of awareness of the 'bigger picture', internalisation of the label of a ‘weak and effeminate race’ or general apathy can all be a factor.

The opposition to victimisation is not always direct and spontaneous, if so, then there would be no need to educate and organise people against oppression.

The actions of Tipu have to be judged and evaluated in their own right - whether they were inspired by bigotry against Hindus or not. The number of Hindus he collaborated with or hired is irrelevant here.

No context can justify racism, antisemitism or caste atrocities. We all unequivocally condemn these, then why not Hindu persecution? No amount of being ‘order of the day’ or ‘context’ can normalise forced circumcision of men to convert to Islam and women captured, converted, and forced into sex slavery - hailed as a religious feat.

The fact that the self-styled ‘sword of Islam’- the Pakistani nation - has repeatedly used and glorified Muslim rulers and their atrocities, calling for a Jihad against ‘Hindu India’, and that various armed and non-armed Jihadist groups today preach the same Hindu hatred and sex slavery expressing ambitions very similar to Tipu should provoke an unapologetic criticism of the actions of the Sultan.

To be sure, Tipu must be appreciated for his good qualities - his bravery, strategic acumen, economic reforms, etc. Just that his anti-Hindu bigotry cannot be traded off against these qualities. Economic prosperity for dignity is not a fair trade.

Hindu persecution is not something that can be put on the bargaining table. Scholars of all hues should come together in condemning it. Consistency in application of principles and standards is how we set a moral foundation of debate and discussion in a culture.

Selective outrage, and citing 'non-perfection' of victims (much like blaming a rape-victim’s character for rape) will turn the intellectual domain into an arena of power politics - where the key variable is power, not the truth.

By its very nature, history, like all inheritance from the past, remains a mixed bag. We have to use our judgement in embracing certain things, and discarding others. Hindu persecution is a long and shameful chapter of India’s history, and we will have to acknowledge and come to terms with it.

Developing a historical temper - where we can look at the past without living in the past - precludes intellectual honesty on our part.

The attempts to suppress or minimise Hindu persecution will (and has) bred distrust of historians, who are increasingly seen as hypocrites who look down upon nationalism but wag their tails for citizenship of international club of “intellectual" elites - those who who don a fierce face of ‘protest’ and ‘dissent’ at home, but are meekly compliant of the rules of the latter game.

Intellectual dishonesty, however noble in its stated aim, will deprive India of a chance to heal and move forward.

It is It is no one’s case that the crimes of the past be avenged in the present, but for the assurance that the ideas and aspirations that guided those crimes will not continue. The work on the future starts with being at peace with the past.