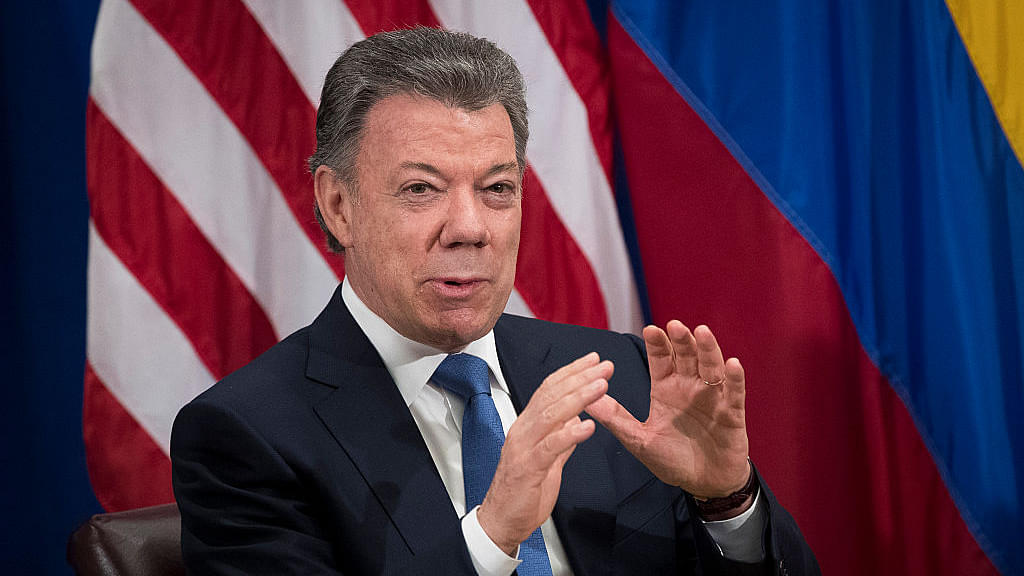 Santos speaks during a meeting in US. Photo credit: Drew Angerer/GettyImages

The Nobel Peace Prize has had some curious recipients. Yet somehow it’s managed to lower its prestige even further: this year, the winner is Colombian President Juan Manuel Santos, for his efforts in negotiating a “peace accord” to end a half-century of war with communist guerillas. As educated Colombians seem to know, judging by their rejection of the treaty in a referendum, there are no communist guerillas nor any real war. Rather, Santos made a cushy treaty with what’s been rightly called the world’s most powerful narco-terrorist group.

The official announcement makes it appear the committee was seeking to reward Santos for brokering the agreement, to encourage Colombian voters to rethink their referendum vote, or both. Yet the Fuerzas Armadas Revolucionarias de Colombia (FARC) long ago ceased being either communist or guerilla in nature.

At one time the FARC was indeed ideological and sought to violently overthrow the government. Today its ideology is plata (money), and it’s sworn off the traditional money-raiser of kidnappings. Which leaves drugs. And although the FARC controls only a small percentage of Colombian territory, curiously that area accounts for about 70 per cent of the nation’s coca cultivation.

Colombia as a whole produces about half of the world’s cocaine supply, including over 90 per cent of that used in North America. Far from any success in reducing this, the latest Colombia Coca Survey, jointly produced by UN Office on Drugs and Crime (UNODC) and the Colombian government itself, shows an almost incredible doubling in the coca crop area in just the last two years.

Much of this increase is directly attributable to Santos ending aerial spraying last year, which as can be imagined is vastly more effective than sending troops into areas guarded by narcotrafficantes and their horrible landmines. I saw a lot of missing male legs in Colombia. “Las minas de las FARC?” I would ask. “Si, señor.” But Santos insists aerial spraying will not resume, despite the country’s chief prosecutor having recently called for it.

Santos cited potential health effects of the herbicide glyphosate (ubiquitously used in the US under the commercial name Roundup). But just in August, New Zealand’s Environmental Protection Authority (EPA) declared the herbicide should not be classified as a mutagen or carcinogen based on studies reviewed by the International Agency for Research on Cancer, the European Food Safety Authority, the Food and Agricultural Organisation of the World Health Organisation, and the US EPA.

Santos just wants no spraying. Both drug exports and the money received for reducing them are extremely valuable sources of revenue for the country — and quite possibly for Santos, other high-level Colombian politicians, and others with any interaction with drug trafficking.

Nor is cocaine Colombia’s only drug export by any means. Heroin exports are increasing.

A 2015 report from the UNODC shows opium-poppy cultivation in Colombia rose by almost 30 per cent between 2013 and 2014, to the highest level observed since 2008. “Colombian organisations appear to have shifted their focus from low-level distribution to large-scale production,” notes the Insight Crime Foundation. “While acknowledging the growing importance of Mexico as a supply country for heroin reaching its market,” according to a 2013 UNODC report, “the US continues to consider Colombia the primary source of heroin in the country,” although Mexico may be moving ahead. The FARC is believed to control a major portion of opiate production.

Now add in the legalisation in Colombia of “medical and scientific” marijuana, promulgated by Santos late last year, which of course will facilitate all marijuana growing.

Is this to insinuate that Santos wants the drug trade to continue? Absolutely!

In part it’s a major source of badly needed export revenue for the country. While underdeveloped nations are usually net exporters, Colombia has a negative balance of trade. Legal exports were only $35.7 billion in 2015, down 37.3 per cent since 2011 because it mostly comprises coal and oil. That’s how important that $10 billion in cocaine sales alone is.

Yet by emphasising worthless information, as when it hypes individual drug interceptions, the Santos government keeps US dollars and material support coming in under “Plan Colombia” — over $9 billion since 2000. Although lauded by both Santos and Secretary of State John Kerry as a tremendous success, by the original standards it’s been a total failure. American taxpayers are literally paying Colombia to grow more drugs.

I doubt the Colombian people know much of this beyond the realisation that the FARC is not an ideological guerilla group but the world’s biggest drug cartel. Colombians are not avid readers, and a 297-page peace deal would be rather much even if they were. Many probably wrongly thought it contained a general amnesty to people who have wreaked so much havoc on their nation for 52 years. I personally knew a woman who said the FARC killed her parents and the local leader took her as a rape mistress at age 13.

They also know that Santos is corrupt and untrustworthy even by the sad standards to which they’ve become accustomed.

Corruption in Norway, where the Peace Prize committee sits, is almost the lowest in the world, and people tend to project their values onto others. Not smart. Colombia ranks 85th in the world, tied with Liberia. A late-August Gallup poll showed that 85 per cent of urban Colombians believe that corruption in the country is getting worse. Which is like denizens of hell believing it’s getting hotter. But the general rule is that the more prevalent a problem, the more it becomes like background noise and is ignored. Colombians just assume their elected officials are on the take. That most definitely includes taking bribes from the narco-traffickers.

Which isn’t to say you can’t push even them too far.

It’s not just that they distrust Santos; they despise him. As a recent Colombian newspaper headline put it, “Santos’ Approval Rating Gradually Approaching Zero Percent.” Specifically, it’s dropped from an amazing 75 per cent to an equally amazing 13 per cent. Assuredly partly that’s unfair blame for the fallout from low oil and coal prices. But there’s more. What is it Colombians know about him that hasn’t reached ears in Oslo or other places where “analysts” have been utterly dumbfounded by the “rejection of peace that would end a half-century of war”?

To the extent there’s been a decline in fighting in Colombia, it’s primarily from the tremendous success of Santos’s predecessor, Álvaro Uribe, who led opposition to the so-called peace accord. He devastated the FARC, whose numbers fell from about 20,000 members to 8,000. And partly it’s been the offshoring of cartel violence to Mexico. The Mexican homicide rate soared from 16.6 per 100,000 in 1995 to 23.5 in 2012, because sending the drugs to Mexico first is much safer than shipping them all the way from South America to US ports of entry.

Educated Colombians know the FARC will see no purpose in laying down its weapons and encouraging peasants to change crops from white gold to something mundane like coffee — the price of which has greatly fallen in recent years. And if nothing else, it’s in competition with other armed cartels.

Only a tiny percentage of the Colombian population gains anything from the drug trade — the growers, the narco-traffickers, and corrupt government officials with their take. Yes, the country, especially drug hub Medellín, is experiencing a building boom fueled in great part by drugs. But nobody likes to admit that.

The arrogance and ignorance of the Nobel Committee is pitiful. Maybe next year they can award it to somebody more deserving. Vladimir Putin will be anxiously waiting by his phone.

This piece originally appeared on American Conservative and has been republished here with permission.

Michael Fumento is an attorney, journalist, and author who lived over four years in various Colombian cities.