Azam Khan’s Noise Is About Grabbing Muslim Leadership In UP 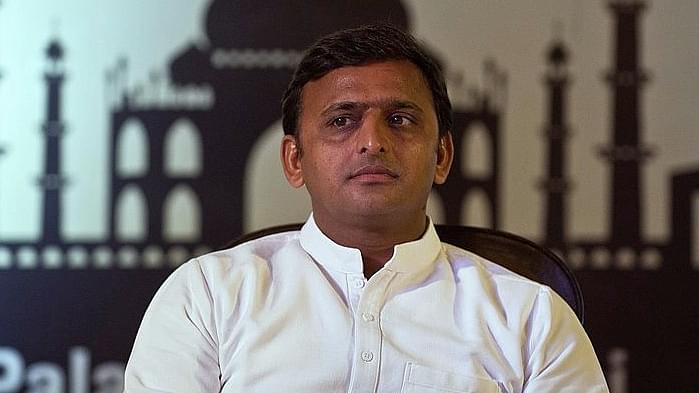 Mohd. Azam Khan, eight times member of the Uttar Pradesh (UP) Legislative Assembly since 1980 and presently a cabinet minister (parliamentary affairs, urban development etc.) in the UP government, has become an embarrassment for Chief Minister Akhilesh Yadav and his Samajwadi Party (SP).

Azam Khan is the only minister in the government who has locked horns with the Governor, Ram Naik. In our federal polity, we often hear about the strained relationships between Governors and CMs in some states, but it is rare to have a cabinet minister repeatedly challenge the Governor and make derogatory remarks against him.

Azam Khan not only does that in UP, but also uses foul language against the Prime Minister, the Election Commission of India (ECI) and even Mother India whom he accused as dayan (a witch)! It is unfortunate that both Mulayam Singh Yadav and Akhilesh Yadav, as CMs, have failed to rein in Azam Khan due to his alleged clout with the Muslims.

But, every time Azam Khan opens his mouth, the Samajwadi Party loses voters. And therein emerges the bigger question.

Is he just an embarrassment for the Akhilesh government and SP or is there something more than meets the eye? Is he an enigma for his party and the government? Why is Azam Khan so persistently foul-mouthed against the Governor, the PM and the ECI? We have not seen Mulayam Singh Yadav, the party president or Akhilesh Yadav crossing the line; for Azam Khan though, there is no such limit. Yet he is being tolerated.

What is his real intention?

His outbursts against constitutional authorities could be due to several factors.

Firstly, he is probably suffering from ‘the multiple CM syndrome’ and considers himself not less than a CM and therefore treats Akhilesh Yadav as a ‘bachha’ (child). In the company of Mulayam Singh, Azam Khan has seen Akhilesh Yadav since childhood and, now, he has to work under the same child. His verbal misadventures indicate that he considers himself as a ‘de facto’ Chief Minister.

Secondly, Azam Khan is angry with the Governor for withholding his ministry’s bills namely, the Uttar Pradesh Nagar Nigam (Amendment) Bill 2015, which curtails powers of mayors of the municipal corporations and provides for their removal, and the Municipal Laws (Amendment) Bill 2015, which deprives the nominated members of their voting rights and restricts their tenure at the pleasure of the state government (which in UP means the pleasure of Azam Khan). All these bills go against the essence of the 74th Amendment of the Constitution that gave constitutional status to the third tier of our federal polity. This may be the reason why the Governor is withholding the bills.

Thirdly, he may also be settling scores with Mulayam for ignoring his claim to chief ministership. Azam Khan cannot fight Mulayam, his ‘netaji’, so he has taken an indirect route to become an eye-sore for both his party and his government. Thus, he bullies them both by creating an impression that he carries Muslim voters with him. Since Muslim-Yadav (MY) combine is the main constituency of SP, Mulayam Singh cannot risk alienating Muslims by showing Azam Khan the exit gate.

Mulayam Singh has shown his displeasure against Azam Khan way back in 2009, when he was trying to grill both Amar Singh and Kalyan Singh. Amar Singh was the national general secretary of the party then, while Kalyan Singh had quit BJP in January 2009 and his son Rajbir had been inducted into the SP.

Is Azam really a rallying point for Muslims in UP? Does his writ run large outside Rampur and adjoining Muslim-dominant areas? One does not really know the answers to these questions, though he is quite popular in western UP and Ruhelkhand.

Azam Khan’s inflammatory speeches have also adversely disturbed communal harmony in UP and the ECI had banned his rallies in UP during the 2014 Lok Sabha elections and he was confined to Rampur.

Now, Azam Khan seems to be building his political future. He has to ensure that in the event of SP losing the next elections, he still commands the loyalty of the Muslims. He may be nursing a desire to replicate what Badruddin Ajmal (AIUDF) did in Assam.

That’s why he has kept himself in the limelight, hogging media attention by periodically issuing controversial statements designed to amuse Muslims.

But he has found an unexpected enemy from Hyderabad in Asaduddin Owaisi and his All India Majlis-e-Ittehadul Muslimeen. Owaisi is keen on contesting the 2017 Assembly elections in UP and this has disturbed Azam. He said recently that “Owaisi should make and eat his biryani in Hyderabad and forget UP.”

Azam Khan’s worry is to keep his Muslim constituency intact. His positioning against PM Modi, Governor Naik, the Election Commission and Bharat Mata is probably his strategy to torpedo multiple obstacles and usurp an autonomous role for Muslim leadership in the times to come.

The Samajwadi Party and the Akhilesh government are struggling to anticipate Azam Khan’s moves. The 2017 Assembly elections in UP may provide the answers.