Around The World, One Country At A Time: How Many Marks For Modi’s Foreign Policy? 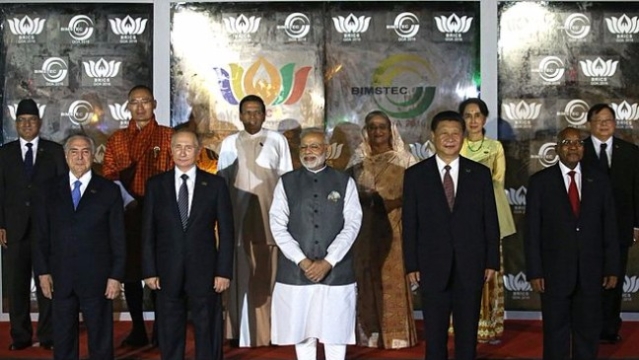 The last few weeks have seen a plethora of articles, commentaries, discussions and debates in print and electronic media about the achievements and perceived shortcomings in the foreign policy pursued by Prime Minister Narendra Modi over the last three years.

While most commentators have given high marks to the government for the vigour and energy as well as vision and direction Modi imparted to the pursuit of international relations, a few have been scathingly critical. They have argued that while relations with Pakistan and China have deteriorated, those with other countries have not witnessed any significant improvement. This assessment, to put it mildly, is flawed and inaccurate.

Having made this assertion, it needs to be admitted that a few policies of the government have not yielded the desired results, primarily because of the rapid and unforeseen changes in global, geo-strategic equations. The international situation continues to be in a state of constant flux and it would be advisable to suitably fine-tune these policies as circumstances demand.

Several of Modi's initiatives are commendable and working well. Some significant successes include the enhanced dynamism as well as expansion in the scope of engagement with the US, Japan, Germany, Australia, West Asia, Africa, Israel, through Act East Policy, Link West Policy, outreach to diaspora, use of soft power and others.

Bilateral ties with the US experienced significant upward momentum from 2000 to 2010. Relations languished during 2010-2014 for a variety of reasons including a rapid decline in the Indian economic growth, perceived policy paralysis, and financial scams.

Relations with the US witnessed substantial rejuvenation only after Modi’s first visit to Washington DC in September 2014, followed by the first-ever participation of US President as chief guest in India’s Republic Day celebrations in January 2015. The period from 2014 to January 2017, when Obama relinquished charge of US Presidency, saw nine meetings including three summits between the leaders of the two countries. This resulted in a decisive impetus to collaboration in many areas, particularly the defence. Cooperation expanded from trade and investment to the strategic realm with both nations committing to the US-India Joint Strategic Vision for the Asia-Pacific and Indian Ocean Region during Obama’s visit to India in January 2015.

Global political situation over the last four months has undergone a dramatic change with Donald Trump taking charge as President of the United States. There is a considerable lack of clarity about the policies that Trump will pursue with India and South Asia. It can be expected that a robust bipartisan support for strong bilateral ties will continue and relations will further strengthen. Modi’s decision to push for economic reforms and modernisation, and the large size of the Indian market should appeal to the businessman in Trump to continue the steep upward trajectory in bilateral ties.

India’s relations with Japan have witnessed a momentous jump and this is reflected in the conclusion of the civilian nuclear deal between the two countries as well as a commitment to invest $35 billion in India over five years. Several more initiatives have been launched.

Modi visited Germany for the second time on 29 and 30 May 2017. Germany is a valuable partner for India both at bilateral and international level and to create a broad coalition of ''middle powers''. Germany, Japan and India are on same wave length concerning China’s sino-centric, neo-colonial Belt Road Initiative. Germany is looking for new partners as it feels disillusioned with President Trump's policies after the recent Nato and G-7 meetings.

In addition to these strides in advancing India’s security, strategic and economic interests, relations with most of India’s neighbours have shown considerable improvement over the last three years. Relations with Bangladesh are better today than they have ever been over more than 42 years. The unanimous ratification of Land Boundary Agreement and highly fruitful visits by Modi to Dhaka in June 2015, and Sheikh Hasina to New Delhi in April 2017 have provided significant fillip to bilateral partnership.

Relations with Sri Lanka have shown a significant improvement, aided partly by the change in government in the island nation in January 2015. It has adopted a balanced approach while demonstrating sensitivity to India's security and strategic concerns.

There is some merit in the criticism that relations with Pakistan and China have not improved over the three-year period. In fact, they have got worse. Modi tried to establish a rapport with Pakistan Prime Minister Nawaz Sharif. He invited Sharif to his swearing-in ceremony and made an impromptu, unplanned visit to Pakistan on the occasion of Sharif’s birthday and his grand-daughter’s wedding. All of Modi’s initiatives met with fresh terrorist attacks and increased cease-fire violations. This happens because Pakistan's relations with India are determined and controlled by its army and spy agency and not the civilian administration. Attacks in Pathankot, Uri, Nagrota and the handing down of the death sentence to former Naval Commander Kulbhushan Jadhav are an attempt to increase pressure on India and to internationalise the bilateral Kashmir dispute. India needs to urgently review and recalibrate its policy so that Pakistan is forced to pay dearly for its heinous activities. India has the capacity, capabilities and assets which it should utilise in a calibrated manner to effectively counter Pakistan’s policy of ''bleeding by a thousand cuts''.

With China also Modi made the right moves on assumption of power. He invited Chinese President Xi Jinping to India at the beginning of his term and went out of his way to develop a close relationship with him. It would appear that Xi had already made up his mind in 2013 to make Pakistan the pivot of China’s foreign policy, both to access the warm waters of the Indian Ocean through the land route, as well as to continue increasing pressure on India. China has not let go of a single opportunity to act against India's interest, be it the case of Masood Azhar or India’s membership to the Nuclear Suppliers Group or visit of the Dalai Lama to Arunachal Pradesh. China had hoped to receive India’s endorsement of its Belt Road Initiative although it had totally disregarded India’s concerns about violation of its sovereignty and territorial integrity by the China Pakistan Economic Corridor (CPEC). All these developments climaxing in India’s refusal to attend the Belt Road Forum have brought bilateral ties with China to the lowest level in many decades.

India can work towards creating a string of middle powers including Germany, Japan and Australia, as also from Latin America, Africa etc, to withstand the economic and geo-strategic pressure emanating from China. The significant role that the US, Europe and Russia could play in the medium term in balancing China also needs to be explored.

Although some turbulence has surfaced in India's robust relations with Russia because of the latter's warming up to Pakistan, the fundamental fabric of India-Russia ties continues to be sturdy. There is, however, a need for more forthright dialogue between the two sides so that mutual trust and confidence is restored and further enhanced. Prime Minister Modi met Russian President Vladimir Putin yesterday (1 June) in St Petersburg during a visit that will conclude on 2 June. Both the leaders will again meet in Astana, Kazakhstan, on 8 and 9 June for the SCO Summit. All such opportunities should be used to the fullest to get a complete understanding of each other's thinking and concerns.

Tectonic shifts in the global political and economic order produce not just many challenges but also several opportunities. India needs to identify and fully exploit these opportunities so that it effectively overcomes the gamut of new challenges, particularly reflected in the aggressive stance of China. In addition to India's huge untapped economic potential, it has limitless reservoirs of soft power and vast assets in the form of its diaspora. Going forward, India should revamp its policies with respect to China and Pakistan so that it reaps maximum benefit from emerging opportunities.