Bengal Famine Of 1943: An Apology For This Holocaust Is Long Overdue From London 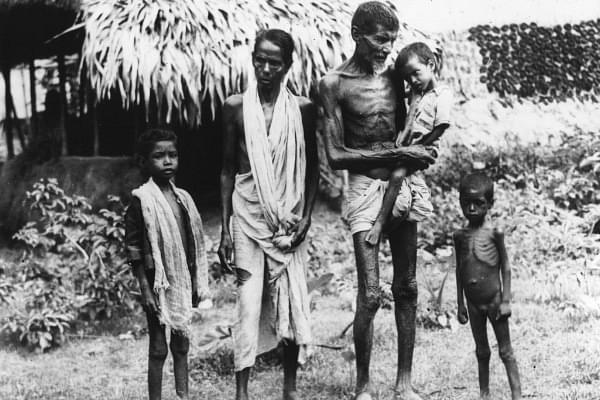 A family of semi-starved Indians who have arrived in Calcutta in search of food in 1943. (Keystone/Getty Images)

A lot has been written about the devastating Bengal famine of 1943 that wiped out 3.7 million (many put the figure even higher) people from the face of this earth. Many accounts of the famine also contain elaborate evidence of the criminal complicity of Winston Churchill in not just creating the famine, but also letting the millions die because he, a racist and white supremacist, hated them. However, it is never ever enough to retell the terrible, British-made tragedy that befell Bengal, not at least till Churchill’s successors—and they continue to enjoy the wealth created out of the loot of India by the British—apologise for that horrendous crime against humanity and pay reparations for it.

Countless historians, economists, and researchers have described the famine as “man-made” and attributed it to a combination of factors. While a marginal crop failure in Bengal, a cyclone that devastated parts of the state and damaged standing crops, and a fungal infection that destroyed paddy crops in parts of the province contributed to the famine, the refusal of the British administration to step in and provide relief, and diverting foodgrains from India to feed British soldiers in Europe, led to the gargantuan tragedy.

It is not without reason that the then British premier Churchill is made to shoulder a major share of the blame for the famine. He harboured a pathological hatred for brown-skinned people and told his secretary of state Leopold Amery when reports of the famine started reaching him in mid-1943: “I hate Indians. They are a beastly people with a beastly religion.” On another occasion, he told the war cabinet: “The famine is their (the Indians’) own fault for breeding like rabbits.”

Churchill, a white supremacist and a die-hard colonialist and imperialist, actually prevented British officers posted in India from providing relief. The extent of his complicity can be judged from a noting in a file in which the British administration in India raised concerns about the increasing number of deaths due to starvation in Bengal. “In that case, why hasn’t (Mohandas) Gandhi died as yet?” he carelessly wrote on the margins!

Churchill’s apologists say the famine was caused mostly by natural calamities that could not have been prevented. Crop failure is cited by them as the biggest contributory cause; they also blame a cyclone that devastated large swathes of coastal Bengal and a crop disease for the crippling shortage of foodgrains and, hence, the famine. However, Churchill’s apologists lose sight of the fact that the extortionist British administration in India was responsible in the first place for the crop failure.

The British, say historians, had banned farmers in large parts of India from growing paddy and wheat, ordering them to grow indigo and opium instead, which could be exported and would earn huge sums for the British treasury. Thus, production of foodgrains declined substantially in India, and there were no buffer stocks when paddy crops in Bengal failed. Also, thanks to British policies and over-taxation, farmers sunk deep in debt and had to sell off their lands to bigger landlords (jotedars). The British encouraged the rich landlords to exploit the poor and landless in order to maximise their profits.

The British, being foreign rulers whose only purpose was to loot India and fatten their coffers, did nothing to increase agricultural productivity. Incidentally, the British were also responsible for the famines in 1770, 1783, 1866, 1973, 1892, and 1897 that, between them, took more than 14 million lives. Sharply declining agricultural yields and vastly reduced crop area (due to farmers being forced to cultivate indigo and opium) created a surefire recipe for disaster. Under British rule, Bengal went from being a net exporter of rice (till the last days of Mughal rule) to a net importer of rice. Many other acts by the British, like the construction of a vast network of railway lines built on embankments that cut off natural drainage and thus laid to waste large tracts of fertile farmland, also created conditions for the famine.

The first trigger for the famine was the Japanese invasion of Burma in early 1942 that triggered an exodus of half a million Indians from that country. Most settled in Bengal, putting a strain on the province’s already depleted resources. In end-April 1942, Allied Forces were withdrawn from Burma and, once they retreated to Bengal, all supplies and transport were diverted to them. The fall of Burma cut off rice exports from that country and led to huge increase in the price of rice in Bengal. But the British continued to supply rice produced in Bengal to its troops stationed in Ceylon.

Bengal was not only flooded with refugees from Burma and the Allied troops from different nations, but also workers from neighbouring states to staff the military production units and to work in various military projects like construction of airfields. But with limited supplies of foodgrains available, and most of it was diverted to feed the troops anyway, prices started shooting through the roof. The British imposed a highly arbitrary and extortionist system of financing the war effort that led to spiralling monetary inflation in India. Also, the massive military buildup in Bengal and the resultant demand for airstrips, barracks, firing ranges, and other military facilities led to requisition of vast tracts of land and displacement of nearly two lakh persons, who flooded into Kolkata looking for work and shelter.

Fearing a Japanese advance into British India from the eastern part of Bengal, the British implemented the ‘scorched-earth’ policy to deny the advancing Japanese troops access to food and transport. Thus, rice stocks in the eastern part of Bengal were confiscated and destroyed, leaving people to starve. The British also confiscated all boats—more than 46,000 of them—thus crippling movement of food and people. Paddy could not be taken to markets and food could not be distributed. Farmers, traders, fishermen, and boatmen were thus reduced to penury, and the complete halt in movement of food led to hunger and starvation. The British administration made no effort to address the crisis faced by local people.

To exacerbate the already worsening food crisis in Bengal, other provinces started banning food exports outside their territories fearing a rise in food prices due to the rise in demand for food from Bengal. The British administrators in Delhi did nothing to discourage and remove such bans. And even as the first signs of famine emerged in mid-1942, the British administration started preferential distribution of goods and services to workers in essential war industries. Rice was diverted from the starving rural poor to feed private and government wartime industries, military and civilian construction, paper and textile mills, engineering firms, the railways, coal mining, and government workers at various levels. Similarly, medicines and state as well as private medical care were prioritised for troops and those connected with the war effort, leaving the hungry and ailing masses to die like flies.

Many historians also cite the events leading up to the Quit India Movement, and this movement itself, as contributing factors for the famine. In order to enlist the full cooperation of the Indians in the war, Churchill despatched a team under Stafford Cripps (the ‘Cripps Mission’) to negotiate a limited transfer of power after the war. The mission failed, and the Congress launched the Quit India movement. The British responded by jailing Congress leaders, and with no leadership to direct the movement, it soon became militant and resulted in large-scale sabotage of factories, bridges, telegraph, and railway lines, thereby threatening Britain’s war enterprise. This is said to have led to a hardening of British attitude towards Indians and made an already hateful Churchill more apathetic to the plight of the starving millions in Bengal.

Between late 1942 and early 1943, Viceroy Linlithgow, Bengal Governor John Herbert, commander-in-chief of British forces in India General Auchinleck, and even the supreme commander of British forces in South-East Asia Lord Louis Mountbatten began requesting London for food imports to Bengal. But the British war cabinet under Churchill continuously turned down those requests and, instead, asked for rice imports from Bengal to Ceylon be stepped up. The British war cabinet also declined offers of food relief from several countries, including the United States of America and Canada. Churchill directed food shipments from New Zealand and Australia to Ceylon, Middle East, South Africa, and Europe to augment the already-existing vast stocks of food there when he could have easily sent even a portion of them to Bengal. It was as if Churchill was hell-bent on pushing the starving millions of Bengal to certain death.

Starvation and malnutrition combined with the unchecked spread of diseases like malaria, smallpox, and cholera due to denial of medical care and medicines to the civilians not connected with the war effort, thus leading to the millions of deaths. The famine also caused acute social distress—mass migration of people, dissolution and disintegration of millions of families, orphaned and widowed hundreds of thousands or children and women, and pushed tens of thousands and women and girls into prostitution.

Churchill’s apologists, some Britishers, and others argue that the famine was an unintended consequence of the war and that it was an unfortunate combination of natural disasters, crop failures, market failures, and the preoccupation of the British war cabinet with the war, due to which it could not pay adequate attention to providing relief to Bengal’s starving millions. What they forget is that the British were ruling over India by force at that time, and the prime responsibility for welfare of British subjects lay with Churchill, who did nothing to provide relief to Bengal when he could easily have. And it is not that the British civilians—who viewed even bread rationing an “intolerable deprivation”—themselves were anywhere near starving at any point during the war. Indians paid for their lives for the British war enterprise and Churchill, as the British premier, was responsible. The British caused the famine, and whether by their ineptness or by design is a matter for academic debate. But the seventy-fifth anniversary of the Bengal famine is the apt time for the British to own up to the holocaust. And start paying reparations.