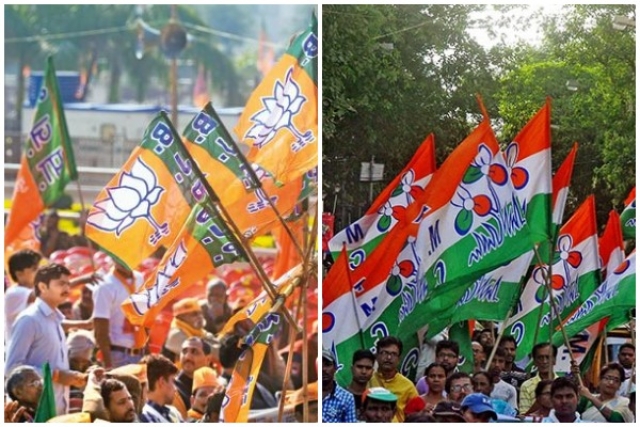 The run-up to the panchayat polls in Bengal in early May is expected to witness a lot of violence with the Trinamool Congress aiming to prove its predominance in the state’s politics. There is a lot at stake both for the Trinamool Congress and the Bharatiya Janata Party (BJP) in the elections to the 3,358 grampanchayats, 341 panchayat samitis and 20 zilla parishads. The three-phase rural polls are being billed as the dress rehearsal for the Lok Sabha elections next year, and Chief Minister Mamata Banerjee would like to demonstrate her continued hold over the state in order to increase her bargaining power at the national political stage.

Bengal has had an ignominious history of political violence from the early 1970s, and intimidation and annihilation of political opponents became an inalienable part of the state’s politics ever since the Left came to power in 1977. Hundreds of Congress workers and supporters were beaten up, injured, driven out of their homes and killed in the 34 years that the Left remained in power. The Trinamool, though it had been at the receiving end of violence by foot-soldiers of the Left, enthusiastically appropriated this legacy of its predecessor and continued to physically beat the opposition into submission. From 2011 (when the Trinamool came to power) until 2014, it was the Congress and the Left, primarily the Communist Party of India-Marxist (CPI-M), that bore the brunt of the Trinamool’s assault and have now been nearly wiped away from the state’s politics. Since 2014, the BJP has been the primary target of Banerjee.

Ever since the process of filing nomination papers commenced on Monday, the state has been witnessing massive and widespread violence that has already claimed two lives, including that of a BJP candidate from Bankura who was allegedly killed by Trinamool cadres on Tuesday. This, say Opposition parties, is just the beginning and violence will only intensify once the process of filing nominations picks up. Stopping opposition candidates from filing nominations has been a favourite poll battleplan tactic of the Left which the Trinamool has adopted. “Our candidates will then be stopped from campaigning, and our supporters will be beaten up. On the day of polling, they will be stopped from casting their votes and the poll process will be rigged with the help of the pliant state administration and the police force,” said state BJP chief Dilip Ghosh. “But we will resist such attempts to rig the polls with all our might,” said Ghosh.

Apprehending large scale violence, the BJP has appealed to the Supreme Court to order deployment of central paramilitary forces. That the Trinamool has opposed the deployment of central forces, maintaining that the 56,000 state police would be enough, is indication of its malafide intent, say opposition parties. “When she was in the opposition, she (Mamata Banerjee) used to clamour for central forces before polls. Now she opposes this deployment for the very same reason that the CPI(M) used to oppose the deployment earlier – so that it can rig the polls and deploy its musclemen to intimidate the opposition,” said state Congress chief Adhir Chowdhury.

The opposition also smells an ulterior motive in the state bringing the polls forward. The 2013 rural polls were held over five phases in July 2013. Banerjee first indicated that it would be held in June-July, and then she even said it could be postponed until early August. A week ago, the state election commission suddenly announced the dates for the polls. The ostensible reason is that the panchayat polls should be over before Ramzan and post-Ramzan, it would be difficult to hold elections during the monsoons. This has left the opposition parties with very little time to select their candidates for the 58,816 seats in the grampanchayats, panchayat samitis and zilla parishads. The opposition also wants the polls to be conducted in five phases, like in 2013, instead of the three phases announced. In 2013, the Supreme Court had ordered the deployment of central forces on a plea by the state election commission, which had locked horns with the Trinamool government. This time, say opposition parties, the state election commission is headed by a pliant chief electoral officer.

Apprehending more violence, Governor Keshari Nath Tripathi has asked the state election commissioner, the chief secretary and the home secretary to ensure peace. Tripathi met the commissioner on Wednesday (4 April). This has enraged the Trinamool with 20 of its MPs meeting Union Home Minister Rajnath Singh (who is said to have a good rapport with Banerjee) and urging the latter to rein in the Governor. But, BJP’s Ghosh and Congress’ Chowdhury say that violence is bound to increase in the coming weeks.

This is because, unlike the 2013 rural polls, it would be a show of strength for both the Trinamool and the BJP. “The Trinamool would like to demonstrate in the run-up to the 2019 Lok Sabha polls that it is the unchallenged ruler of Bengal, while the BJP would like to flex its muscle and prove that it is a serious contender for power in the state. It is important for the BJP to score well in the rural polls this time not only to show that it can dislodge the Trinamool from power in 2021, but also to achieve the target set by Amit Shah to bag 20 of the 42 Lok Sabha seats in the state,” said political columnist Amritangshu Roy. Thus, he adds, the BJP will resist the Trinamool’s strong-arm tactics with all its might. For the Trinamool, too, the rural polls are important to show that the BJP is not a strong force in Bengal and that it remains the undisputed ruler of the state.

The Congress and the CPI(M) are already spent forces in the state and it will thus be a fight between the Trinamool and the BJP. But, unlike the Congress and the CPI(M), the BJP will not meekly surrender to the Triamool’s strong-arm tactics and intimidation. The BJP has already demonstrated its will, and with such a lot at stake, won’t back down from a faceoff with the Trinamool - which, in effect, means that the violence over the last two days is only a teaser for what is in store in the near future.