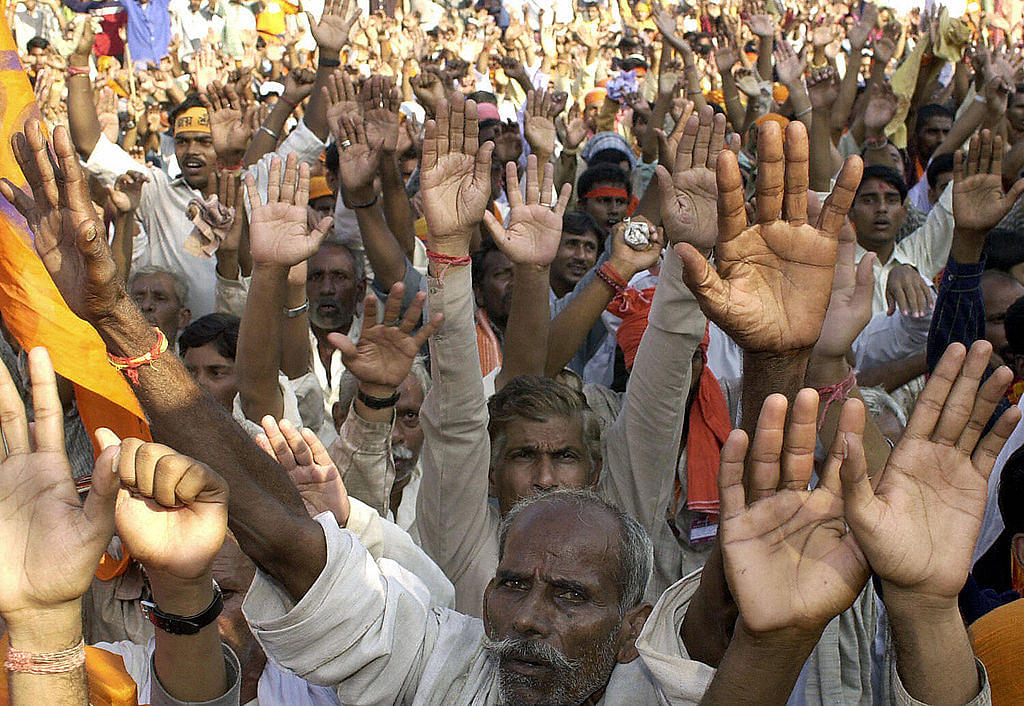 Uttar Pradesh (UP) is well known for its caste politics. Whatever the parties say about their agendas, they keenly monitor the caste calculus of each and every constituency at the micro level and the overall caste dynamics at the macro level. Those who follow elections in the state are obviously keen to know the electors’ caste composition, how castes are oriented to politics and how political parties are oriented to castes, what has been the general electoral behaviour of various castes during the past elections and if there is any chance for the state to transcend caste-politics and move to ideology- and development-based politics.

UP’s population is about 21 crore today (19.9 crore as per Census 2011). The Hindus are 79.7 per cent of it and Muslims 19.2 per cent. Census does not count castes, but counts Dalits, i.e. Scheduled Castes (SC) and the Scheduled Tribes (ST). Thus, Muslim and Dalit population percentages are available in the census data, but not of the other backward classes (OBC) or upper castes. The Registrar General stopped counting castes after the 1931 census. However, the National Sample Survey Organisation (NSSO) puts OBC population in Uttar Pradesh per cent at 41 per cent leaving 19 percent upper castes. The UP government constituted the Hukum Singh Committee in 2001 that worked out the share of various sub-castes in SC and OBC caste groups. Thus, in the state population, upper castes are 19 per cent, OBCs 41 per cent, SCs 21 per cent and Muslims 19 per cent (Table-1). The subsequent tables - 2 and 3- list the share of some major sub-castes within the SC and OBC categories.

While caste was always a factor in Indian elections, UP’s electoral politics was not based on caste per se. Congress was considered to be a rainbow coalition of all castes; however, soon the party began to be seen as unfair to the Dalits and OBCs so far as giving them their due share in leadership was concerned. Because of reservation of seats in legislature, the Congress had to give tickets to as many Dalits as the number of seats reserved for them, yet the Dalits always felt marginalised in the party dominated by the upper castes.

This sentiment was tapped into by Kansi Ram who mobilised Dalits and Backward Classes through organisations such as the All India Backward and Minority Community Employees Federation (BAMCEF) in 1978 and the Dalit-Shoshit-Samaj-Sangharsh-Samiti (DS-4) in 1981. That created political consciousness among the Dalit-Backward Classes community that they were being neglected and needed empowerment through autonomous politics and caste/class-based parties.

The formation of the Bahujan Samaj Party (BSP) in 1984 was a watershed in that direction, though later developments put a hindrance in that confluence of the Dalits and the Backward Classes.

Around the same time as the rise of the BSP, began the rise of caste-based parties and caste-politics in UP.

The acceptance of the Mandal Commission recommendations by the VP Singh government on 7 August 1990 further reinforced caste politics by offering 27 per cent reservation to OBCs in government jobs. Both Dalits and OBCs came on a common platform to support the move, but later took different political trajectories to safeguard their caste interests. Janata Dal at that time and later Samajwadi Party (SP) under Mulayam Singh Yadav and BSP under Kansi Ram and Mayawati greatly espoused the cause of depressed castes and began what is known as identity politics using an exclusionary frame: BSP was patronised by Dalits and SP by OBCs. Since 1989, the state politics is largely dominated by SP-BSP.

We can see the detailed results for major parties in UP since independence in Table 4. One could find that except for 1991 when the BJP got a majority, UP suffered fractured mandates till 2007 when Mayawati’s BSP formed a majority government. That, in turn, was possible because she attempted social engineering bringing Dalits and Brahmins together, an experiment that brought two castes at the extremes of the social continuum.

Later Akhilesh Yadav of the SP also formed a majority government in 2012 and for that, he too banked on the ATM coalition that brought together Ahirs/Yadavs, Thakurs and Muslims.

Which party draws it support from where?

UP politics is mainly watched for four main players, viz. BSP, SP, BJP and Congress. Hence, we propose to provide the reader with the support base of each of these parties during the last twenty years.

BSP is known for its Dalit support base that is pegged sufficiently high. However, as per the Government of UP Gazette classification, Dalits are divided into two categories; the Jatav/Chamars and the ati-Dalits that include the Pasi, Dhobi, Kori, Balmiki, Khatik, Dom, Kanjar and the Nat groups etc. The BSP receives huge support from the Jatav/Chamars, approximately 70-80 per cent vote for the party. However, the ati-Dalits are not enthusiastic about voting for Mayawati and the BSP; their support to BSP was 49 per cent in the last assembly elections in 2012 which declined to as low as 33 per cent in the 2014 Lok Sabha (LS) polls. Mayawati could not win a single seat in LS 2014.

We already know that only 48.75 per cent Dalits vote in UP. Where are the remaining 51 per cent Dalits then? Now, greater Dalit mobilisation by other parties may not only make Dalits shift away from the BSP owing to dilution of identity politics, but may also energise their non-voting section to vote, and that too, independent of the BSP. That is a dangerous signal for the party.

Upper castes have generally voted the BSP in small numbers; even when Mayawati’s social engineering was much credited with her getting absolute majority in 2007, she got just 16 per cent of the Brahmin votes. That, however, showed accretion in the BSP’s Brahmin votes by 11 percentage points. In fact, the success of Mayawati’s social engineering was more because of the vertical social coalition that she created whereby she registered accretions in votes in all sections of society without fail (Table 5).

BSP was also getting some votes from the non-Yadav OBC category especially more-backward and most-backward categories. However, it is intriguing that for the last two assembly polls, she has been expelling leaders of the most-backward category. Before the 2012 assembly polls, she expelled Babu Singh Kushwaha, and similarly, before the 2017 assembly elections, she expelled Swami Prasad Maurya- that can harm with regard to the more- and most backward caste votes. [For detailed caste profile of BSP for the last 20 years, see Table -6]

Traditionally, Samajwadi Party’s politics was based on Yadavs and Muslims because of the role Mulayam Singh Yadav played in respect of the Ramjanambhoomi-Babri Masjid disputed structure issue when he first became CM of UP in 1989. In the twenty-first century, he added Thakurs to the SP kitty making it an Ahir-Thakur-Muslim (ATM) coalition.

The Yadav support for the SP has been consistently high between 65-70 per cent, but declined to 54 per cent in the 2014 LS polls. In view of the division in the Samajwadi Party between Akhilesh and Mulayam-Shivpal, there is bound to be division in the Yadav ranks leading to decline in Yadav support to SP in 2017.

Thakur support to SP had jumped from 9 per cent in 2002 to 26 per cent in 2012, almost a rise of three times. That was due to induction of some strongmen- Thakurs, notably Raghuraj Pratap Singh alias Raja Bhaiyya of Kunda in the party. However, in 2014, Thakur support for SP declined to a poor 8 per cent and the word going round is that in wake of a possible return of Rajnath Singh as CM in UP, Thakurs are gravitating towards the BJP.

The SP has been trying to rope in some Brahmins too this time. In addition, the party also receives support from some non-Yadav OBCs as more-backwards and most-backwards are not solidly aligned to any single party. With Akhilesh focused on development, it has to be seen if the party transcends beyond its narrow casteist approach and becomes inclusive in 2017. A detailed profile of the SP support base during last 20 years is given in Table 7.

BJP as a national party suffered decline in UP post-Mandal and the demolition of the Babri masjid. The party got 221 seats and 31.5 per cent votes in the 1991 assembly polls, but suffered consistent decline thereafter both in seats and votes (Table 8).

The BJP’s vote share steadily got scattered. It became an urban-centric party of upper-caste, traders and merchants having no inroads in rural areas, or among the poor, Dalits and Muslims. And its nadir was seen in 2012 when it was reduced to just 47 seats and 15 per cent votes.

However, owing to Mr. Narendra Modi, the prime ministerial candidate of BJP in 2014, the party made a serious comeback and swept the state both in terms of seats and votes bagging 73 out of 80 LS seats with its ally Apna Dal and got 42 per cent plus votes.

In 2014, the party was hugely popular among all sections of society, and received votes from OBCs, Dalits and even Muslims. That’s why the party is upbeat about doing well in the current polls for which it has attempted serious social engineering. The party is mainly focusing on attracting more-backward and most-backward castes among OBCs as well as Dalits from the non-Jatav segment. For that, it has allocated tickets to OBCs in a big way, slightly more than their share in the population i.e. 41 per cent. If it works at the grass-roots level, there could be some surprising results for the party. A detailed profile of the BJP support base during the last 20 years is given in Table 9.

Always in a state of decline- Congress

The Congress’ decline began with the beginning of anti-Congressism taking firm roots in UP in 1989 with the arrival of Mulayam Singh Yadav as CM with the Janata Dal. For the last 27 years, UP has been out of Congress’ reach. The only exception was the 2009 LS polls when the party won 21 LS seats and 18.4 per cent votes, registering an accretion of about 10 per cent votes over the 2007 assembly polls. The party used to boast of its rainbow coalition but all its important segments went to other parties; upper castes to BJP, Dalits to BSP and Muslims to SP.

Congress has taken a big risk by aligning with SP in UP because it might shift the left-over social base, especially Muslims, in 298 assembly constituencies to SP and cause a collapse of its organisational base in those constituencies. That in turn may prove very detrimental to its ambitions in the 2019 LS elections.

A detailed profile of the Congress support base during last 20 years is given in Table 10.

This essay is intended to provide a synoptic view of state politics in UP through the lens of caste. It is hoped that the reader will get some better understanding of how caste dynamics impacts the electoral outcome in UP. With development being the current buzzword and inclusion the electoral philosophy, will the impact of caste dilute or still continue more resolutely in 2017 and beyond? We shall all wait and watch, with utmost eagerness.