Decoding Doctors’ Stir: Why A Resolution Is Very Difficult 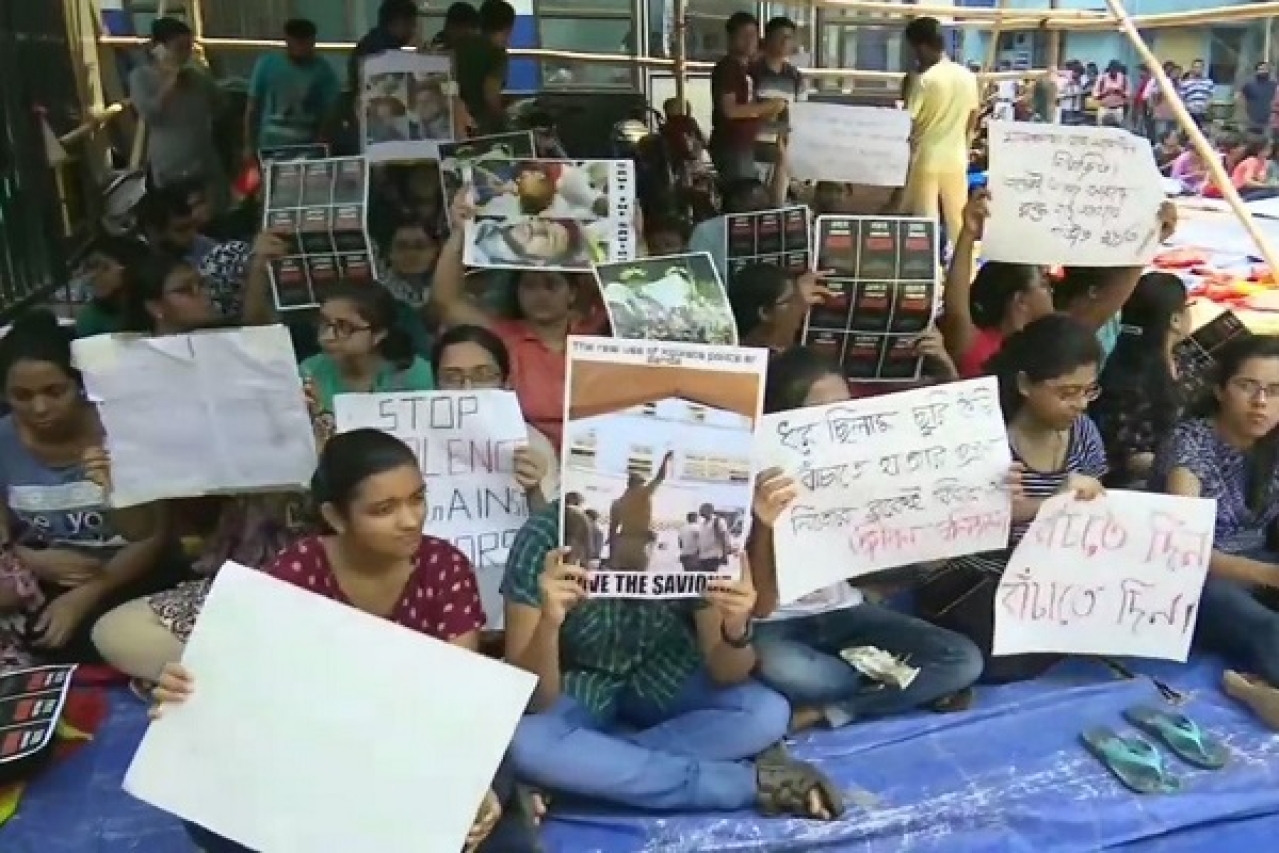 The strike by junior doctors at all government hospitals in Bengal leading to the shutdown of all but emergency services at major public healthcare centres in the state entered its seventh day today (Monday). And the strike looks all set to continue since a resolution seems next to impossible.

This is so for two primary reasons: perceived highhandedness on part of Chief Minister Mamata Banerjee, and her alleged propensity to appease minorities. At the top of the list of six demands by the agitating junior doctors are: (a) an unconditional apology from Mamata Banerjee for her intemperate outburst and wild allegations against them last week, and (b) arrest of all the 200-odd people involved in the 10 June murderous assault on doctors at NRS Medical College and Hospital that left two of them critically injured.

It is highly unlikely that Mamata will offer an unconditional apology to the agitating doctors and, that too, in front of them at NRS Hospital where they have been staging a sit-in since last Tuesday. The doctors had demanded that Mamata Banerjee go to NRS to hold talks with them and that the Chief Minister release a strongly-worded condemnation of the 10 June assault on doctors.

To their credit, they have given up this demand of the Chief Minister going to NRS to hold talks with them; the doctors on Sunday decided to hold talks with Banerjee at a venue of her choice. But they have put forth a condition, which Mamata Banerjee may not meet: that the meeting be held in a hall big enough to accommodate representatives of all medical colleges and hospitals in the state and that the media also be present at the venue. They had earlier rejected the Chief Minister’s invitation for a closed-door meeting.

One of the reasons why Mamata may not apologise to the doctors or issue an apology to the doctors or even hold an open meet with the media present is her fear that things may go out of her control, and possibly to her disadvantage as well, a bring her public embarrassment, given her propensity to lose her cool in case things turn against her.

But the hidden reason (which few will recognise and state) is that the 200-odd people who arrived at NRS on 10 June and launched a brutal assault on the doctors belonged to a minority community, which has been a regular beneficiary of the government’s appeasement politics so far. Incidentally, two among the mob - the son and nephew of the octogenarian, Mohammad Sayeed, whose death sparked the murderous assault on doctors - are imams.

Arresting such a large number of people, including two imams, is likely to upset the government-community dynamics, which is possibly why the Mamata government is still hesitant to take concrete action in the case. With crucial Assembly polls not very far away, the Trinamool may not want to alienate its core votebank. This is possibly why the Chief Minister is not issuing a strong condemnation of the assault as per the doctors’ demands.

With Mamata Banerjee clearly making it known that she does not view the assault on the doctors with much seriousness during her diatribe, warnings and ultimatum to the doctors last Thursday, her attempt to play down the mob attack at SSKM is not difficult to understand. She described the attack as a “terrible incident”, “spontaneous” and “accidental”. She also proffered the view that those who attacked the doctors had “regretted their mistake”.

The impasse has reached such a stage that the arrest of just five people for the violence is being viewed as tokenism, without any sincerity. The doctors want all the 200-odd people behind bars if they are to get back to work.
They say the non-arrest of the others, and the inaction against the masterminds of the attack is evidence enough of the state government’s attempt to shield the guilty.

“The Chief Minister’s views apart, we feel it was not a spontaneous attack. The family members of the deceased went away from the hospital after threatening to return after a couple of hours with a large mob. They carried out their threat, and hence, it was not spontaneous at all. It was pre-planned. How is it that the police have not been able to get any information to carry out more arrests and identify the masterminds even after interrogating the five persons they have in their custody? The state government’s intentions are thus suspect,” said a junior doctor of Calcutta Medical College and Hospital who did not want to be named.

Another demand of the doctors that Mamata Banerjee is unlikely to meet is that of instituting a judicial enquiry into the police failure to provide protection to the embattled junior doctors when they were being attacked on Monday last.

The state government has issued vague assurances that the circumstances leading to the attack would be probed, but the doctors are sceptical. They have strong reason to be so: there have been hundreds of attacks on doctors by angry mobs over the past few years where police have remained mute spectators, and no action has been taken against any policeman.

“The present government is reluctant to take action against law-breakers. Be it auto-rickshaw drivers who assault passengers or mobs which attack doctors, the accused mostly go scot-free or get a very light punishment. This has encouraged crime in Bengal,” said a senior doctor of the NRS Medical College and Hospital.

The Bengal Police claims that “extensive changes” were made to enhance security at government hospital campuses last year. “The police outposts at all government hospitals now have 40 policemen with an inspector-rank officer in charge. We are now planning to deploy at least two inspectors and put an assistant commissioner-rank officer in charge. CCTV cameras, alarms and hotlines will be installed,” said a police spokesperson.

But merely increasing the number of policemen deployed at the outposts in campuses of government hospitals will make no difference. “The police have to be very proactive and not only prevent attacks on doctors and medical staff, but also take strong action against attackers. They will have to be told, and given blanket permission, to take such action against anyone who attacks doctors irrespective of the attackers’ identity. But will that happen? There is no way the present government will allow police to act independently,” said a junior doctor of state-run Chittaranjan National Medical College and Hospital.

A huge trust deficit exists between the Chief Minister and the medical fraternity, and this will only deepen in the current context. Not only have her angry outbursts against the doctors and the wild allegations she levelled against them last week agitated the doctors even more, the doctors said that even at her press meet on Saturday, she made false statements against them.

And not only have attacks on doctors continued throughout the week, most of the attacks were allegedly carried out by Trinamool goons under the direct orders of party leaders, say the medical professionals.

These are the many reasons why the impasse is likely to continue. Even if the government bullies the agitating doctors into submission now, it will be only a temporary solution to a deep-rooted problem created by the present dispensation.

Get Swarajya in your inbox everyday. Subscribe here.
Tags:
78 Shares